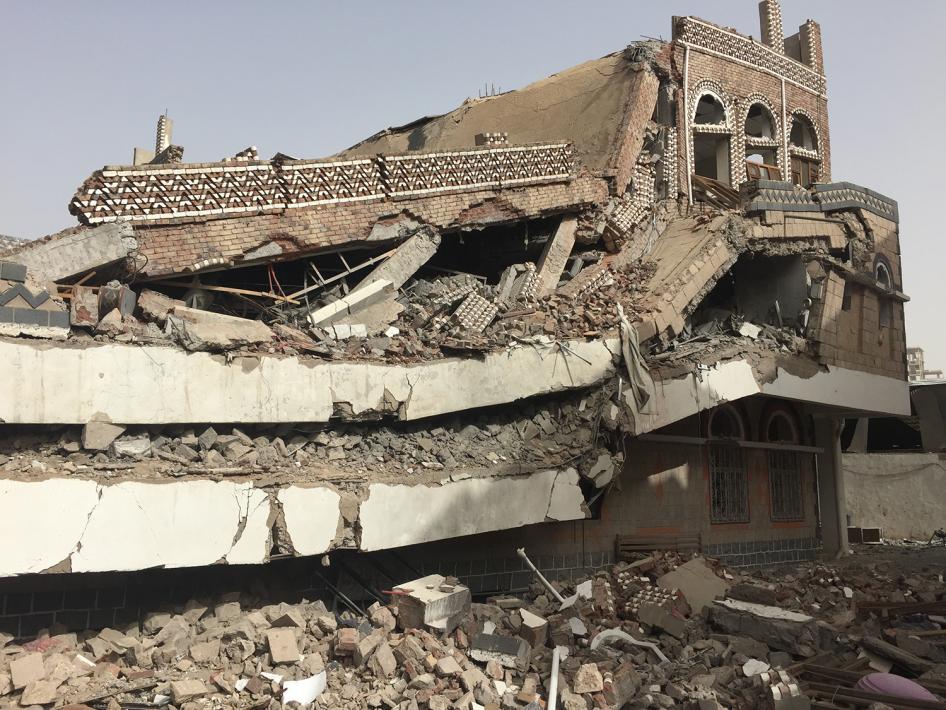 Seventeen workers remained inside the Middle East Workshop for Sewing and Embroidery when coalition aircraft bombed it on February 14, 2016. One died and four sustained injuries.

Saudi Arabia-led coalition airstrikes have unlawfully hit numerous factories, warehouses, and other civilian economic structures in Yemen, Human Rights Watch said in a report released today. In the absence of credible and impartial investigations in Yemen, Saudi Arabia and other coalition members should agree to an independent international inquiry into these and other allegedly unlawful attacks.

The 59-page report, “Bombing Businesses: Saudi Coalition Airstrikes on Yemen’s Civilian Economic Structures,” examines in detail 17 apparently unlawful airstrikes on 13 civilian economic sites, including factories, commercial warehouses, a farm, and two power facilities. These strikes killed 130 civilians and injured 171 more. Collectively, the facilities employed over 2,500 people; following the attacks, many of the factories ended their production and hundreds of workers lost their livelihoods. Further, with more than 20 million people in desperate need of humanitarian aid, the strikes on factories are contributing to the shortages of food, medicine, and other critical needs of Yemen’s civilians.

Taken together, the attacks on factories and other civilian economic structures raise serious concerns that the Saudi-led coalition has deliberately sought to inflict widespread damage to Yemen’s production capacity, Human Rights Watch said.

“The repeated coalition airstrikes on civilian factories appear intended to damage Yemen’s shattered economy long into the future,” said Priyanka Motaparthy, senior emergencies researcher and author of the report. “Saudi Arabia and other coalition members have shown no interest in investigating unlawful attacks, or even compensating the victims for lives and property lost.”

Human Rights Watch interviewed victims and witnesses at the sites in the Sanaa and Hodaida governorates in March 2016, searched for possible military targets in the vicinity, and examined remnants of munitions found.

Until Saudi Arabia ceases unlawful strikes and either conducts investigations that meet international standards or agrees to an independent international inquiry, Saudi Arabia should be suspended from membership on the United Nations Human Rights Council. Human Rights Watch is not aware of any credible investigations by Saudi Arabia or other coalition members into these or other allegedly unlawful strikes, nor of any compensation for victims.

Raouf Mohammed al-Sayideh, a 25-year-old worker at a sewing and embroidery workshop hit in one attack, described rescuing fellow workers: “I heard the bang and came …to look for the other [injured] workers…. One worker was stuck under the rubble. The manager had to call his phone so that we knew where he was to rescue him. The last person we rescued from inside [the wreckage] was the [16-year-old] boy…. his legs got stuck between these two large blocks… his body was charred.”

On March 26, 2015, the Saudi Arabia-led coalition – consisting of Bahrain, Kuwait, Qatar, the United Arab Emirates (UAE), Egypt, Jordan, Morocco, and Sudan – with United States participation, began an aerial campaign against Houthi and allied forces. The report documents strikes on civilian economic structures from the beginning of the aerial campaign to February 2016.

Parties to the Yemen conflict declared a cessation of hostilities on April 10, and began peace talks in Kuwait later that month. Though the level of violence in the country diminished after the ceasefire formally went into effect, both airstrikes and fighting on the ground have continued. On May 25, a coalition airstrike hit a water bottling factory in Lahj, injuring two workers.

Negotiations to end the conflict continue. Arriving in Kuwait on June 26 to support peace talks, UN Secretary-General Ban Ki-moon warned that “the economy is in precarious condition,” pointing to “an alarming scarcity of basic food items” in Yemen. The airstrikes have compounded an already bleak situation in which more than 80 percent of Yemen’s population requires some form of assistance, Human Rights Watch said.

On May 27, the Saudi government issued a statement asserting that coalition forces “have fully complied with international humanitarian law and international human rights law in their military operations.” The statement noted that, “where claims about targeting of civilians [or] civilian facilities…are made, investigations are conducted by a separate and distinct investigation team established at Coalition Air Force [headquarters].” However, the government provided no public information to verify these claims, and Human Rights Watch has found no evidence to support them. Saudi officials did not respond to repeated requests for information regarding the intended target of airstrikes documented in this or prior reports, or the progress of any investigations.

The US also has a responsibility to investigate any strikes in which they took part. The US has been a party to the conflict since the first months of the fighting. In June 2015, a US military spokesperson stated that the US was helping the coalition with “intelligence support and intelligence sharing, targeting assistance, advisory support, and logistical support, to include aerial refueling with up to two tanker sorties a day.”

The United Kingdom also assisted the Saudi-led coalition by “providing technical support, precision-guided weapons and exchanging information with the Saudi Arabian armed forces,” the Defence Ministry said. Human Rights Watch found remnants of UK-manufactured guided munitions at two strike sites – including one munition produced in May 2015 after the start of the aerial campaign – and the remnants of a UK-manufactured cruise missile that killed or injured civilians at a third site.

Human Rights Watch and other international and Yemeni groups have called for foreign governments to halt sales and transfers of all weapons and military-related equipment to parties to the conflict in Yemen if “there is a substantial risk of these arms being used…to commit or facilitate serious violations of international humanitarian law or international human rights law.”

“The US and UK have largely deferred to the Saudis to investigate unlawful strikes despite little reason for confidence these investigations will be diligently carried out or the results made public,” Motaparthy said. “These governments are benefitting from billions in arms sales and even claim their support is helping Yemeni civilians, but have done nothing to back up those claims.”

This attack took place on May 25, 2016, and is included as a supplement to the report.On May 25, starting at about 4 a.m., coalition aircraft dropped between eight and 10 bombs on the Radfan mineral water bottling factory. The factory was closed for the night, but some workers sleep onsite. The bombs hit the factory over a period of about 20 minutes, wounding two employees. The strike damaged generators, a production line, and multiple buildings in the factory compound, including the workers’ sleeping quarters.

I was in deep sleep…. suddenly I heard a [loud] bang that woke me up, along with two other [workers]. I asked [one of them] to go and check…. Less than five minutes later and one of the guards came running toward us from the generators’ area shouting, ‘Run away, run! They are bombing us.’

We ran in our pajamas, without shoes, and we met at the gate of the factory… [then] another strike hit and we flew [into the air].

Three company employees interviewed said that the factory contained no weapons or military supplies. The airstrike caused extensive damage to the factory, which stopped operating after the attack. The factory employed about 300 workers, who are left without income.

Airstrikes also hit three houses in a nearby village, killing at least six civilians – including four children and a woman – and wounding four others – three more children and another woman – according to one of their relatives. The relative thought the airstrikes targeted homes of al-Qaeda members in the area, and said that his cousin, who died in the strikes, lived next door to an al-Qaeda member.

Human Rights Watch reviewed photographs of the site and of munition remnants taken by factory employees, and identified the remains from a Paveway laser-guided Mk-82 (500-pound) bomb. The attack on the water bottling factory was unlawful so long as it was not being used for military purposes, such as to produce or store goods intended for military use.

Coalition-allied forces control the area where it is located, so employees and factory management considered the area safe, two employees said. One of the employees also said the area had not previously been targeted by airstrikes. Military officers affiliated with the coalition inspected the factory about two weeks before the strike and took four men originally from northern Yemen into custody. The officers did not alert employees that they found any military goods or had concerns regarding the factory.

This case study is excerpted from the report.

On December 12, 2015, starting at 8:25 p.m., coalition aircraft dropped three bombs on a Coca-Cola factory off the Airport Road in northern Sanaa. The bombs hit the factory over several minutes, wounding five employees. They destroyed raw materials used to produce soft drinks, a generator, and both the glass and plastic bottling lines. The attack appeared to violate the laws of war.

Ahmed Tahir Mabkhout, 43, a salesman for the company, was standing next to the factory’s generator when the airstrike hit:

I didn’t hear the first bomb, because the generator was very loud. But I saw the fire. When the second hit, I was by the [factory] exit, and when the third hit, I was already in the street. The second and third bombs landed inside the factory hanger.

Mabkhout was wounded by the first bomb:

I got metal fragments in both of my lower legs. I spent two months in the hospital, and have had to have three operations so far. I still need one more. One of the wounds to my right leg is still open, where they had to do a skin graft from my upper thigh.

The factory employed 600 workers before the war, but had to lay off 370 of them after the bombing.