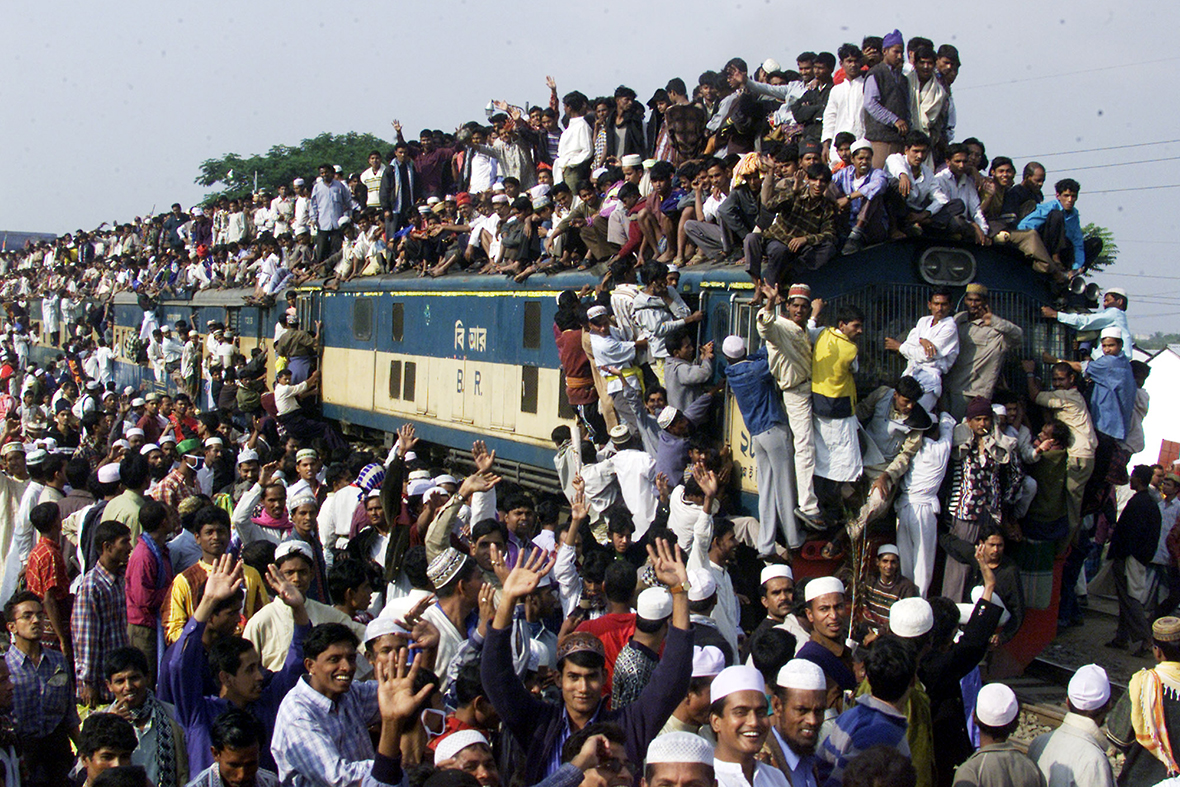 World Population Day is observed annually on 11 July to raise awareness of global population issues. The date was chosen because it was on or around 11 July 1987 that the world’s population reached five billion people. That figure is now nearly 7.5 billion, and the United Nations estimates it will be around 11.2 billion by the year 2100. Part of the problem is that people are living longer – life expectancy at birth increased from 30 to 67 between 1800 and 2005.

China is the world’s most populous country with around 1.4 billion inhabitants, but its population is falling, and India is catching up rapidly.

People crowd onto a bridge that they believe can help them escape tribulations and illnesses during the annual Caiqiaohui event in Mianyang, Sichuan province, China

An artificial wave pool is packed by would be swimmers to escape the summer heat in Daying county in Sichuan province, China

People scramble to reach the roof of an overcrowded train at a station in Dhaka, during the annual festival of Eid al-Adha in 2015

Scooters and motorcycles at a junction during rush hour in Taipei, Taiwan, in 2009

Devotees try to form a human pyramid during celebrations to mark the Hindu festival of Janmashtami in Mumbai, India

Students practice tai chi on a playground at a high school in Jiaozuo, Henan province, China, during a Guinness World Record attempt for the largest martial arts display, on 18 October 2015

A traffic jam near a toll station on a huge highway as people return home at the end of a week-long national day holiday, in Beijing, China, on 6 October 2015

Jobseekers visit booths of companies at a job fair for graduates in Nanjing, Jiangsu province, China

Shi’ite Muslims gather at the shrine of Imam Hussein during Ashura commemorations in Karbala, Iraq, on 4 November 2014 when an estimated 20 million people visited the holy site

Shi’ite Muslims gather at the shrine of Imam Hussein during Ashura commemorations in Karbala, Iraq, on 4 November 2014 when an estimated 20 million people visited the holy site

Lifeguards attempt to control the crowd as people visit the beach on new year’s day in Durban, South Africa, on 1 January 2014

A crowded beach in Durres, on the Albanian Adriatic

Commuters wait for a train at a subway station in Sao Paulo, Brazil

Passengers crowd into a departure hall while waiting to board trains at a railway station in Wuhan, in China’s Hubei province, during the annual new year mass migration

People walk along a crowed shopping street on the first day of the winter sales in Barcelona, Spain

Laundry hangs outside a student dormitory at a college in Wuhan, Hubei province, China

An overcrowded train leaves a platform in Tongi near Bangladesh’s capital Dhaka in 2003, as pilgrims flock to the annual Ijtema Muslim gathering

High rise residential buildings are seen behind a slum in Mumbai, India, on 20 July 2010

Hindu pilgrims make their way over pontoon bridges near Sangam during the Maha Kumbh Mela in Allahabad, India