Home » Economy » Global economy ‘grim’ and G20 must step up to fix it: China 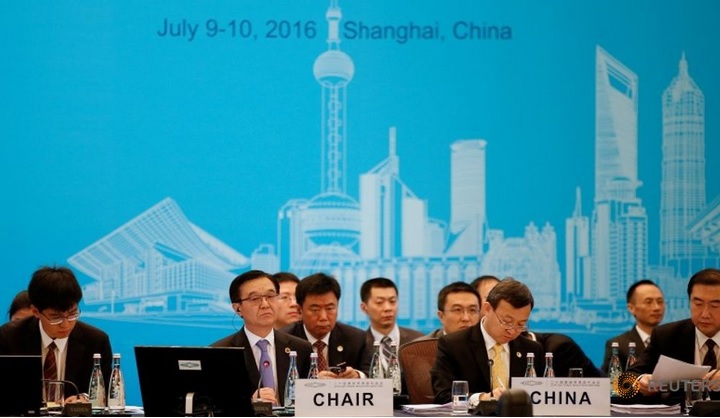 Global economy ‘grim’ and G20 must step up to fix it: China

Gao made the remarks at the start of a two-day meeting of trade ministers from G20 economies in Shanghai, as uncertainty hangs over the outlook for a slow-growing global economy now beset by post-Brexit reverberations.

“Global trade is dithering, international investment has yet to recover to levels before the financial crisis, the global economy has yet to find the propulsion for strong and sustainable growth,” he said.

“In the current circumstances, the international community expects the G20 to show leadership in resolving the prominent problems we are facing and inject impetus for recovery and growth.”

Attendees listen to a speech by China’s Commerce Minister Gao Hucheng during the opening ceremony of the 2016 G20 Trade Ministers Meeting in Shanghai, China July 9, 2016.

In April, the International Monetary Fund (IMF) cut its 2016 global growth forecast for the fourth time in a year, to 3.2 percent from 3.4 percent, amid weakening global demand and geopolitical risks. A fifth straight global growth mark down by the IMF looks almost certain.

The World Trade Organization expects 2016 to be the fifth consecutive year of less than 3 percent growth in global trade, and Director-General Roberto Azevedo said on Friday trade would remain sluggish going into the third quarter of the year.

Uncertainty over Britain’s vote to leave the European Union will dampen near-term economic growth for Britain and the rest of Europe and will affect output globally, according to the IMF.

The specter of protectionism also hangs over the meetings in Shanghai.

China’s huge but struggling steel sector has relied on exports to offset the impact of slowing domestic demand, but it has been accused of using unfair pricing to push foreign competitors out of business.

Chinese trade officials have repeatedly stressed that the country has been the victim of overzealous anti-dumping actions by foreign countries, which fail to take into account Chinese efficiency or its low labor and production costs.