Home » Manchet 3 » Finland and Russia: a Bit More Than NATO 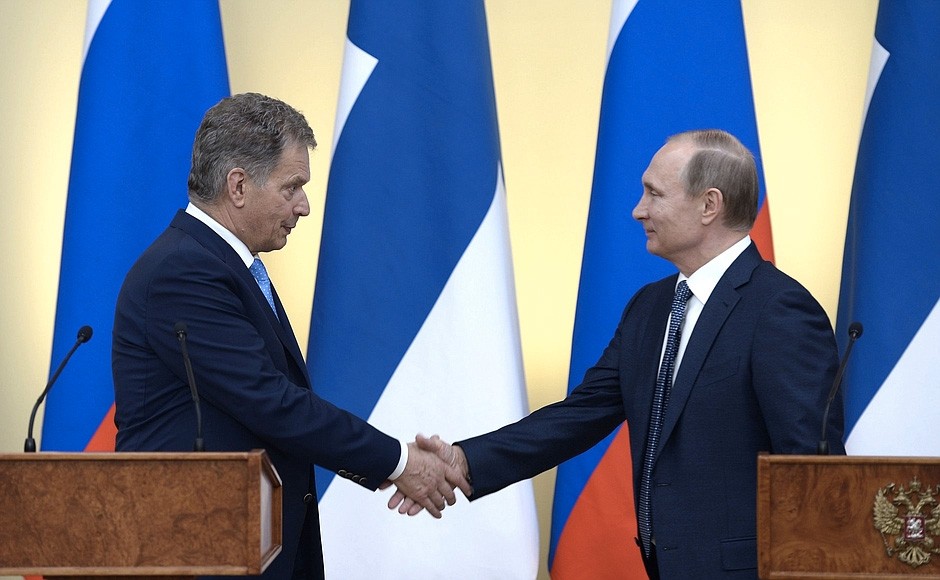 Finland and Russia: a Bit More Than NATO

On July 1, 2016, President of the Russian Federation Vladimir Putin met with his Finnish counterpart Sauli Niinistö. Despite the Ukrainian crisis, the events in Syria and attempts by Western countries to isolate Russia, the Russia–Finland partner dialogue, as well as political contacts and trading and economic cooperation between the two countries never ceased. Vladimir Putin and Sauli Niinistö exchanged opinions on key issues of the international agenda, including the prospects of Finland joining NATO. Vladimir Putin said that Russia would respect Finland’s choice, noting that should Finland join NATO, Russia will be forced to ensure its security using all means at its disposal. Lev Voronkov comments on the issues discussed by the two leaders and analyses the results of their meeting.

When Niinistö took presidential office in 2012, he spoke about his intention to take a pragmatic approach to cooperation with Russia. Since Putin’s latest visit to Finland in 2013, Niinistö has visited Russia three times. During this time, the Russia–Finland partner dialogue, as well as political contacts and trading and economic cooperation never ceased, despite the Ukrainian crisis, attempts by Western countries to isolate Russia, Crimea joining Russia, the developments in Syria, the aggravation of the situation in the Baltic Sea, and the criticism of Finland’s stance by the Baltic states and influential politicians in the neighbouring Sweden.

Currently, Finnish investments into Russian economy amount to about $7 billion, and about 7,000 Finnish firms do business in Russia. Russia–Finland interaction is mutually beneficial: the Finnish company Fortum participated in the modernization of combined heat and power plants in Russia via $4 billion investment programme; it is also planning to launch a pilot project in the Ulyanovsk Region to build a wind farm with a capacity of 35 MW for the wholesale market. Moreover, the construction of the Hanhikivi-1 Nuclear Power Plant continues in Northwest Finland with Rosatom taking part in it; Russia’s United Shipbuilding Corporation is completing construction of the world’s first ice-breaker powered by liquefied gas and diesel fuel in a Helsinki shipyard; and Yandex’s data centrerecently became operational in the Finnish municipality of Mäntsälä.

Finland remains a favourite destination among Russian tourists. In terms of inbound tourism , Finland provided the second largest number of holidaymakers among EU countries in 2015, and was fifth overall (link in Russian). Russia is the third-largest consumer of Finnish goods, behind only Germany and Sweden. Still, due to the unfavourable situation on the global market and the EU sanctions policy developed and adopted with Finland’s participation, Finnish exports to Russia dropped by 40 per cent, and its agricultural exports into Russia dropped by 72 per cent.

Putin’s working visit took place immediately after Brexit (the United Kingdom is an important market for Finland) and after the European Union, with Finland’s consent, extended anti-Russian sanctions and Russia took the appropriate counter-measures. In this context, Finland’s foreign trade prospects have not improved in the slightest. Sidestepping the issue of lifting the sanctions, the presidents focused on discussing the possibilities for developing bilateral trade and economic relations outside the restrictive measures. Among the possible solutions mentioned were localizing the production of Finnish goods that are under Russian sanctions (which has been done with Valio, , for instance) and increasing the activity of Finnish investors in Russia (link in Russian). Regarding more radical measures to solve the issue, Vladimir Putin recommended turning to London for advice. Clearly, as an EU member, Finland is capable of influencing the overall state of relations between the European Union and Russia.

In addition to bilateral relations, the presidents of Russia and Finland paid great attention to the discussion of a number of international issues that will be on the upcoming NATO summit agenda to take place in Warsaw on July 8–9, 2016. Finland and Sweden have been invited to participate Thus, the discussion of the international agenda and the situation in the Baltic region was extremely timely and necessary.

Efforts have been stepped up by the supporters of NATO membership in Finland, which is not a member of any military alliance, as well as in neighbouring Sweden. NATO supporters use the propaganda campaign started with the assistance of other states (NATO and the European Union members) to frighten the population with Russia’s aggressive actions and thus turn public sentiment in favour of abandoning the policy of neutrality and force these countries to join NATO. The Finnish President had stated previously that he intended to hold a referendum on Finland’s membership in NATO.

Through the media, the Finnish and Swedish military authorities have also contributed to fuelling fears with regard to Russian aggression, with lively discussions on alleged secret incursions of Russian submarines into Finnish and Swedish territorial waters having taken place recently. No submarines were found, neither could any plausible explanation for the incursions be offered. Still, they did manage to sway public opinion.

At the concluding press conference, Vladimir Putin stated that, given Finland’s neutral status, Russia had long since stationed its military 1,500 kilometres away from the Russia–Finland border and adheres to decisions made previously in this respect. Russia takes Finland’s status into account, despite NATO’s revitalized activities in the Baltic countries and in the Baltic Sea close to its borders. Against this background, claims of Russian aggression against Finland do not hold water and look far-fetched and exploitative. There are no other convincing arguments that could indeed prove Russia’s “aggressive” actions against Finland and confirm the concerns of the Finnish population.

Throughout the long history of Russia–Finland relations, the probability of Russia being attacked via Finnish territory and Russia’s attempts to preclude this possibility have caused a large number of problems and conflicts. It has never been in Finland’s best interests to ignore Russia’s understandable and legitimate concerns about its security. Should Finland join NATO, its military will become a part of the NATO military infrastructure located along the 1,300 kilometres of the Russia–Finland border with immediate proximity to St. Petersburg and Helsinki. The threat of NATO forces attacking Russia from Finland will increase drastically. In that case, Russia will be unable to continue its previous policies toward Finland and will be forced to ensure its security by any means at its disposal.

It is doubtful that such a move will increase Finland’s national security, since the country will have to be guided not so much by its own national interests, but by the bloc’s collective strategy. And this coordinated strategy is perceived in Russia as a threat to its fundamental interests, not to mention the fact that it has a negative impact on trade, economic and military-technical ties with non-NATO countries. Just look at the situation with the French Mistral helicopter carriers, and the unilateral termination of military-technical cooperation with Russia that NATO had announced in connection with the Ukrainian crisis.

Russia is also concerned with the intentions of Finland, the United States and the United Kingdom to draft agreements or treaties on defence cooperation. What is important, though, is not the agreement itself, but its contents. In 2010, NATO members and the non-allied countries of Northern Europe concluded a defence agreement which does not imply the creation of a military alliance with strict mutual commitments. The President of Finland assured Vladimir Putin that the agreements with the United States and the United Kingdom are technical and spell out the current situation.

Public opinion surveys in Finland show that there are still more people opposed to joining NATO. If a referendum on the issue is held and if it produces a negative result for those who support NATO membership, it may remove the issue from the national agenda for a long time. Before the referendum, both sides will step up their efforts to win the population’s support. Against this background, we can expect new initiatives, if not provocations, on the part of NATO supporters aiming to prove Russia’s aggressive nature. Under such circumstances, if the currently drafted agreements between Finland, the United States and the United Kingdom on interaction in defence and military technologies are, indeed, purely technical in nature, then they may be used as an additional argument against Finland’s full NATO membership, since many issues important for Finland may be solved through other channels.

During the meeting, the President of Finland said that mutual confidence-building measures could de-escalate the situation in the Baltic Sea; such measures could include the combat planes of all countries flying over the Baltic regions with their transponders on. In this connection, Vladimir Putin charged the appropriate Russian authorities with entering this issue on the agenda of the upcoming meeting f the NATO–Russia Council scheduled to take place in Brussels after the NATO summit in Warsaw (link in Russian). If the NATO member countries are sincerely interested in de-escalating the situation in the Baltic Sea, then they should take this initiative positively. NATO’s refusal to approve the proposal put forward by the President of Finland will be hard to interpret as an argument proving Russia’s growing aggressiveness.

The exchange of opinions that took place during Vladimir Putin’s working visit to Finland allowed the countries to clarify their respective stances on pressing international issues and the problems in bilateral relations. It was also an important element in maintaining a regular dialogue between two neighbouring and friendly countries on a large range of international issues.