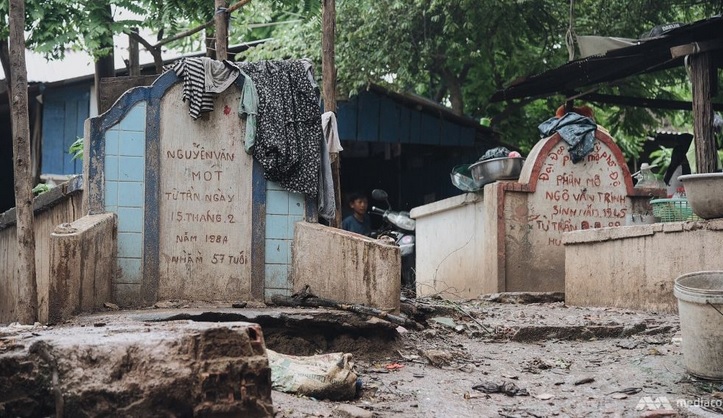 To find the Thmor San community, one must travel south from downtown Phnom Penh, past the growing modern apartment complexes and across the Bassac river to Meanchey. It is a drive of less than 20 minutes.

In dry times this part of the city is a dustbowl, in the wet, a muddy quagmire. According to locals, it is a “trouble area where drug abuse, prostitution and inter-community conflict adds extra difficulty to the task of daily survival.

Within its depths, through a tangle of winding paths that even tuk-tuks cannot penetrate, the neighborhood grows more dense as Doeum Sleng is revealed.

It is here where an entire community calls a cemetery home.

In amongst the large tombstones, their colours faded like the memories of their owners, chickens scratch, puppies sleep and children blow bubbles, giggling. It is an awfully peaceful place for where the living meet the dead.

There are hundreds of tombs, some dating back nearly a century. More seem to form parts of foundations for houses and furniture for the some 140 families living here than their original intended purpose, however.

The graves are mostly Vietnamese and Chinese and during Lunar New Year the relatives of the dead come to pay tribute with candles and food offerings. The people living in this necropolis make way and watch on – rituals far removed from their beliefs, yet happening, literally, among their homes.

Children play in and among the tombstones, paying little attention to their presence or significance.

Most of the people here are hardly residents by choice. Their backgrounds and reasons are diverse – many lived by the nearby riverside where constant sand dredging caused the banks to collapse, destroying their former homes. Others have simply found themselves plunged into poverty as the cost of living surges in the capital and poor neighbourhoods are sold off to the highest bidding developer, leaving whole communities displaced and destitute.

What binds them together now is this difficult life.

The village has no electricity or running clean water. There are prevailing issues related to hygiene, substance abuse and violence; the area is strewn with waste. There is no drainage system and waste is burned, buried or thrown into the river.

One solid structure that remains in place was built in the 1960s. The house contains two main rooms that until recently housed 20 different families before many of them found an alternative location.

Underneath the house, in what resembles a mud pit, 30 families were forced to live, in the darkness and damp. Only one family remains now and they are desperate to move – the wet season means the entire subterranean area is constantly flooded, sometimes for weeks at a time.

Until recently, about 30 families were living underneath a house in these horrid conditions.

Housing here is free but it is also risky. Very few families have legal land titles – this is state public land – and people can be forced to vacate at the whim of local authorities. In 2014, the community was given a formal, verbal eviction notice by the district chief, which has not yet been enforced.

While men try to find work, a number of women have taken to selling traditional Khmer rice cakes, which they produce in their basic, often makeshift homes.

Channa, a mother of four, is one of them. Her situation is permanent but uncertain; she has lived in the cemetery for ten years after being unable to pay rent in more conventional housing in the city.

“Sometimes we are able to earn money, but sometimes not,” the 41-year-old said.

“I am struggling to send my children to school. They are growing up and I don’t know if I will able to find another place for them to stay,” she added, explaining how she was encouraged as a child to quit school and move from the provinces to the city to seek opportunity with her parents.

It is a perilous cycle of poverty that is difficult to break. And now she lives among “ghosts”.

“I was very afraid when I first moved here. I was afraid of the graves and the ghosts,” she said. “I also worried about my security, especially in the nighttime when there was forest and only a few families lived here.

“At first I was not allowed to live here because the local authority came and told me to move out. However, my husband begged the officials saying we did not have any place to go besides this.

“My neighbours knew that we didn’t have any money or even any rice to eat.”

Services are being provided to the community to help supervise and educate children, right next to the grave sites.

Non-government organisation (NGO) Friends International is helping provide options for the residents, including how to prepare personal budgets, equipment and resources for starting small businesses and support for children’ education.

“We noticed a big dropout of youth. They don’t really go to school, they work on the streets selling flowers,” said the group’s communication officer Vuthy Sokanha.

“Their parents are most likely uneducated and they want their kids to start working from a young age. It’s a big problem.”

The NGO has deeper roots in the wider community where it provides a drop-in centre where children can begin the pathway to permanent schooling and adults can learn important skills such as sewing to help make money.

“People are just managing to live day by day, they don’t think about tomorrow. We want to push them harder to keep their children in school, not go to work,” she said.

“It’s very, very concerning. Youth are the way to build this country but many are still illiterate. We’re trying very hard.”

Making sure children are able to attend school is one of the major challenges facing NGOs working in Thmor San.

“If they evict me, I will agree if they exchange or give me a better place to live because it is not safe to live here, especially during the rainy season,” she said.

“If they don’t give me anything, I don’t know what to do.”