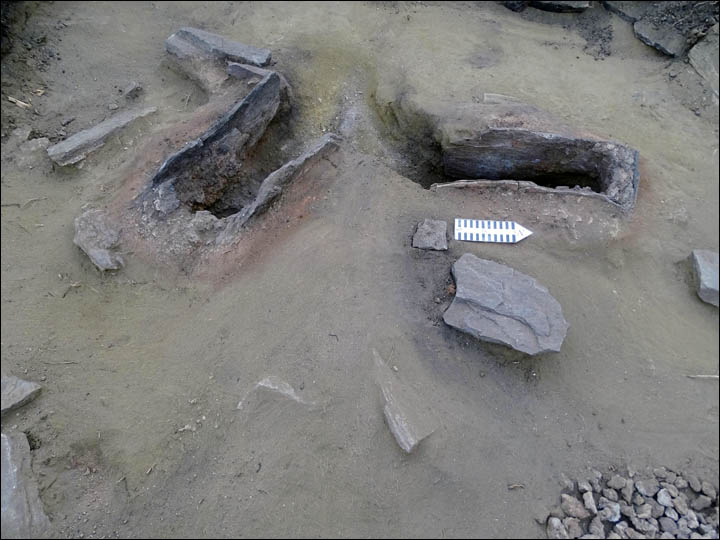 Professor Artur Kharinsky (right on the top picture) said: ‘We are lucky to find this. Firstly, we managed to find and save these unusual remains of ancient metallurgy from destruction.’ Pictures: Artur Kharinsky

Archeologists walking to a beauty spot on Lake Baikal chanced across the ‘unique’ ancient furnaces after noticing slag and clay coating on a rough road used by tourists to access the shoreline.

Tests with geophysical equipment confirmed the presence of underground structures.

Two furnaces made of stone were unearthed, believed to have been used to smelt iron ore for weapons such as knives, arrowheads and quiver hooks as well as parts for harnesses, stirrups, sickles, and belt buckles.

Professor Artur Kharinsky, of Irkutsk National Research Technical University, said: ‘We are lucky to find this. Firstly, we managed to find and save these unusual remains of ancient metallurgy from destruction.

‘Secondly, we found evidence of advanced metallurgical technology dating back to around 1000 AD. We will get a more precise age of the finds after radiocarbon analysis.’

The furnaces may have belonged to the Kurykan people, known as skilled blacksmiths. ‘Apart from the furnaces, we found the slacks, pieces of ore and parts of a clay cover which also prove the existence of a metallurgical workshop.’

The site is located on a hill several dozen metres from the lake. It seems to have been chosen for optimum wind need for the combustion process.

Had the excavation not gone ahead, tourist traffic could have destroyed the site.

The furnaces are from the oldest in this part of Siberia, but they highlight a more sophisticated level of metallurgical development than previously known for this period.

‘The metallurgical traditions in this region are rooted in much more ancient times,’ said the professor. ‘The first finds were made in 1998 and the numerous discoveries came in the following years showing us that the Baikal region was one of the largest metallurgical region in Asia at the end of first millennium BC  and early in the first millennium AD.

‘We found numerous underground forges, which looked like funnel-shaped pits. They were dug out in the loam. In particular, such finds were discovered near the villages of Kurma and Shara-Tagot.

The furnaces are from the oldest in this part of Siberia, but they highlight a more sophisticated level of metallurgical development than previously known for this period. Pictures: Artur Kharinsky

‘Judging by the amount of iron, which can be produced with such forges, the locals managed not only to meet the needs of their own territory, but also to export production to neighbouring areas.’

The latest find, at Shida Bay on Lake Baikal, in Irkutsk region, are 1,000 years younger ‘and show more advanced technology. The location is about 260 kilometres northeast of Irkutsk.

‘It is obvious that the people who lived here, despite all the migration processes, managed to keep, pass on, and improve the metallurgical technologies from generation to generation.’