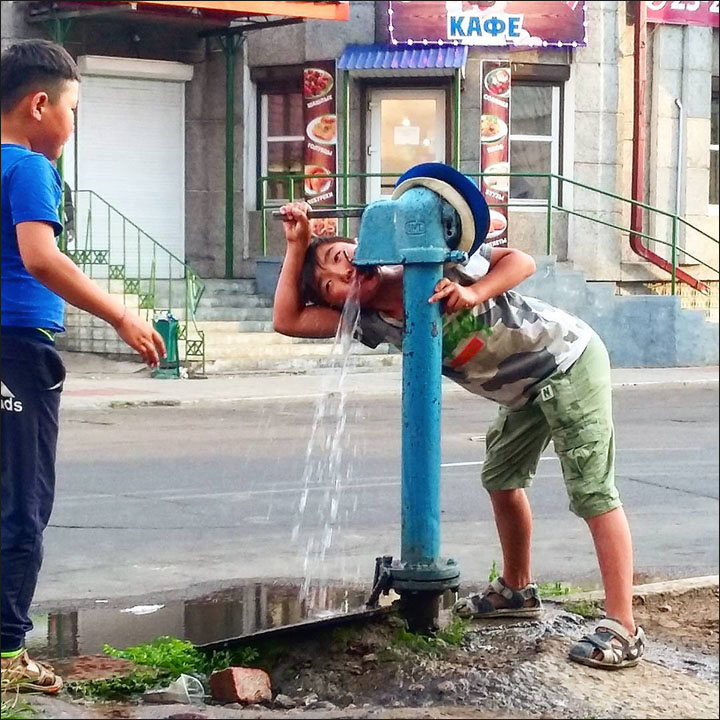 Record heat and abnormal flooding as Siberia gets freak weather

Some regions parched, others underwater in latest meteorological surprises.

Residents of Ulan-Ude and Yakutsk try to refresh in any way they can.

On 1 July Ulan-Ude experienced its highest ever temperature on this day – a tropical 33.8C – causing a performance of the Republic of Buryatia’s first national opera to be cut almost in half because of the stifling heat.

Yet in Siberia’s largest airport, Tolmachevo in Novosibirsk, a huge downpour left the main passenger terminal underwater. Checkin for flights had to be done manually because of the flooding.

Eyewitness Nikita Lapov told NGS: ‘At about 9 am the shower began, a large group of people went out the airport, but could not reach their cars and buses, because of the rain.

‘They came back inside the airport. And in the check-in zone ceiling tiles were falling down. First, one fell, and the water poured down from the hole. Then three more fell down.’

Flood in Novosibirsk airport Tolmachevo. Car ‘drowned’ in Omsk. A girl swimming in puddle in Kemerovo.

Heavy rains also hit Altai, Kemerovo and Omsk regions. In Omsk, on 2 July, a car ‘drowned’ in the big puddle near a multi-storey residential building on Lapteva Street.

Locals say that the giant puddle was nicknamed the ‘Laptev Sea’. The car was flooded with water up to the wheel.

Eyewitness say that the driver was ‘reckless and tried to drive through the puddle with the side window fully opened, so the water began to flood the vehicle interior very quickly’.

Local official Vladimir Kazimirov blamed the lack of a ‘storm drain’. ‘We have pumped out 30 barrels of water from Lapteva Street per night.

‘The problem is, that we have the storm drain  only on 22-23% of streets, the other are constantly flooded.’