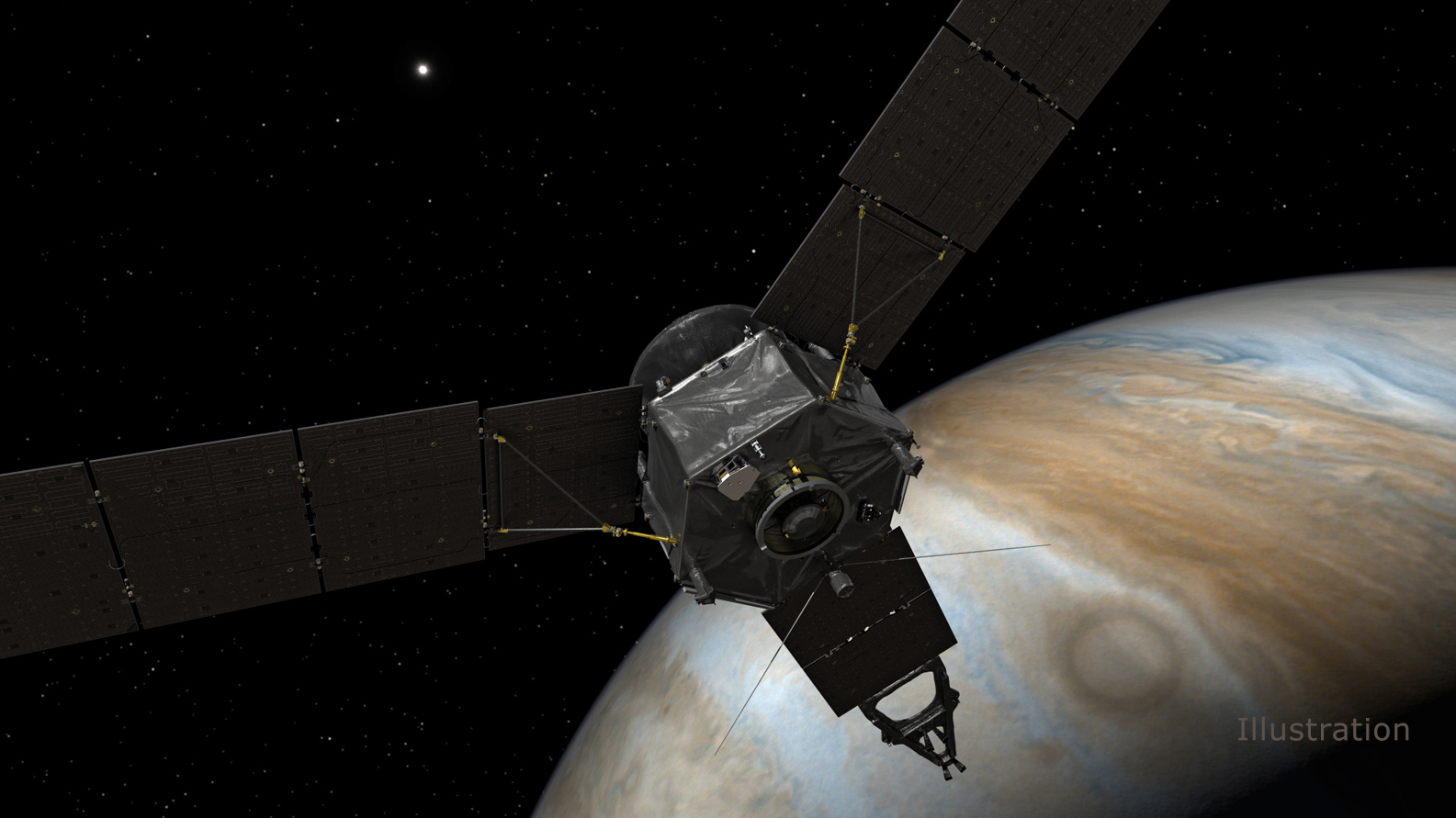 A NASA spacecraft was poised for a one-shot attempt to slip into Jupiter’s orbit on Monday (july 4) for the start of a 20-month-long dance around the solar system’s largest planet to learn how and where it formed.

Flight controllers at NASA’s Jet Propulsion Laboratory in Pasadena, California, were preparing for a long night as the Juno probe streaked closer toward Jupiter at 200 times the speed of sound in the empty vacuum of space.

Confirmation of whether Juno, the only solar-powered spacecraft ever dispatched to the outer solar system, had successfully placed itself into polar orbit around Jupiter was not expected until 11:53 p.m. EDT on Monday (0353 GMT on Tuesday).

NASA’s Juno spacecraft obtained this color view at a distance of 6.8 million miles (10.9 million kilometers) from Jupiter, on June 21, 2016.

Launched from Florida nearly five years ago, Juno must be precisely positioned, ignite its main engine at exactly the right time and keep it burning for 35 minutes to shed enough speed so it can be captured by Jupiter’s gravity.

If anything goes even slightly awry, Juno will sail helplessly past Jupiter, unable to complete a US$1 billion mission to peer through the planet’s thick atmosphere and map its gargantuan magnetic field.

Scientists are particularly interested in learning how much water Jupiter contains, which is key to determining where in the solar system it formed. Jupiter’s origins, in turn, affected the development and position of the rest of the planets, including Earth and its fortuitous location conducive to the evolution of life.

The immense gravity exerted by Jupiter’s sheer size – packing 2-1/2 times the mass of all the other planets combined – is thought to have helped shield Earth from bombardment by comets and asteroids.

“We are learning about nature, how Jupiter formed and what that tells us about our history and where we came from,” Juno lead scientist Scott Bolton, with the Southwest Research Institute in San Antonio, told reporters.

Only one other spacecraft, Galileo, has ever circled Jupiter, which is five times farther away from the sun than Earth and is itself orbited by 67 known moons. Seven other U.S. space probes have sailed past the gas giant on brief reconnaissance missions before heading elsewhere in the solar system.

Ground control teams will monitor Juno’s progress during its do-or-die engine burn by listening for a series of radio signals.

“They really are musical notes. Based on what musical note is sent, we will know how something is doing,” Bolton said.

The risks to Juno will not end once it arrives in orbit. The probe will fly in highly elliptical, egg-shaped orbits that pass within 3,000 miles (4,800 km) of the tops of Jupiter’s clouds and inside the planet’s powerful radiation belts.

Juno’s sensitive science instruments are housed in a 400-pound (180-kg) titanium vault for protection. But during its 37 orbits around Jupiter, Juno will be exposed to the equivalent of 100 million dental X-rays, said Bill McAlpine, radiation control manager for the mission.

The spacecraft, built by Lockheed Martin, is expected to last for 20 months. On its final orbit, Juno will dive into Jupiter’s atmosphere, where it will be crushed and vaporized.

Like Galileo, which circled Jupiter for eight years before crashing into the planet in 2003, Juno’s demise is designed to prevent any hitchhiking microbes from Earth from inadvertently contaminating Jupiter’s ocean-bearing moon Europa, a target of future study for extraterrestrial life.