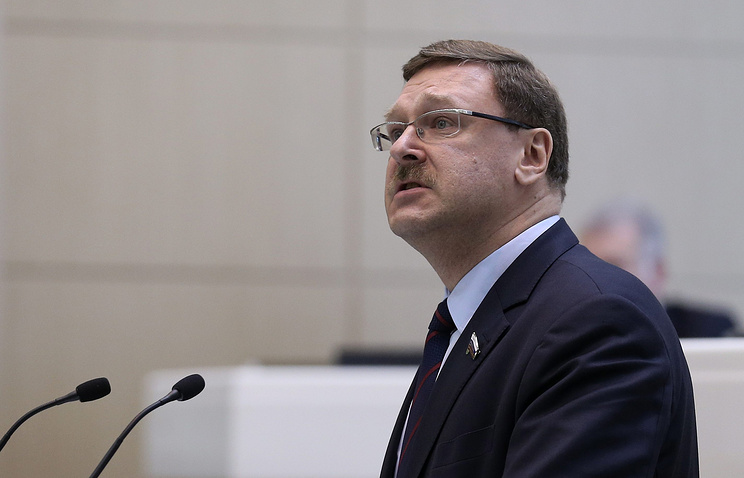 A Russian senior lawmaker said on Sunday (July 3) the current session of the Parliamentary Assembly of the Organization for Security and Cooperation in Europe (OSCE) is mere travesty of parliamentarism.

“It looks like the current session of the OSCE Parliamentary Assembly in Tbilisi is seeing developments that have nothing to do with parliamentarism but discrediting its very idea instead. It is not parliamentarism, it is travesty of parliamentarism. And a rather primitive one,” Konstantin Kosachev, the chairman of the international committee of Russia’s Federation Council upper parliament house, wrote on his Facebook account.

According to Kosachev, Ukraine’s delegation is pushing a “draft resolution on ‘mass human rights violations in Crimea.’” Most of those present, in his words, “are ready to support the draft without going into detail, so to say, by word of mouth.” He reminded that the OSCE has a mission in southeastern Ukraine, which is working quite efficiently.

“Resolutions of the OSCE Parliamentary Assembly could help settle the situation in Ukraine, not in Crimea where, thank God, the situation was timely settled without loss of human lives,” he wrote. “But instead, they are focusing on Crimea. The draft will be put for vote tomorrow. I am afraid the chance for an own constructive mission of the OSCE Parliamentary Assembly in the Ukrainian crisis will be lost.”

He expressed thanks to the French delegation for its support and added that the Russian delegation has decided to skip further discussions on the draft.

“It is a duty of lawmakers to shape their own point of view but not to rely on others’ interpretations. Crimea is open for all. But they have gathered in Tbilisi with some other aim. Their session has failed to be our common, it has failed to be a common European and will go down in history with a negative sign,” Kosachev added.

The Republic of Crimea and Sevastopol, a city with a special status on the Crimean Peninsula, where most residents are Russians, refused to recognize the legitimacy of authorities brought to power amid riots during a coup in Ukraine in February 2014.

Crimea and Sevastopol adopted declarations of independence on March 11, 2014. They held a referendum on March 16, 2014, in which 96.77% of Crimeans and 95.6% of Sevastopol voters chose to secede from Ukraine and join the Russian Federation. Russian President Vladimir Putin signed the reunification deals March 18, 2014.

Despite the absolutely convincing results of the referendum, Ukraine has been refusing to recognize Crimea as a part of Russia.