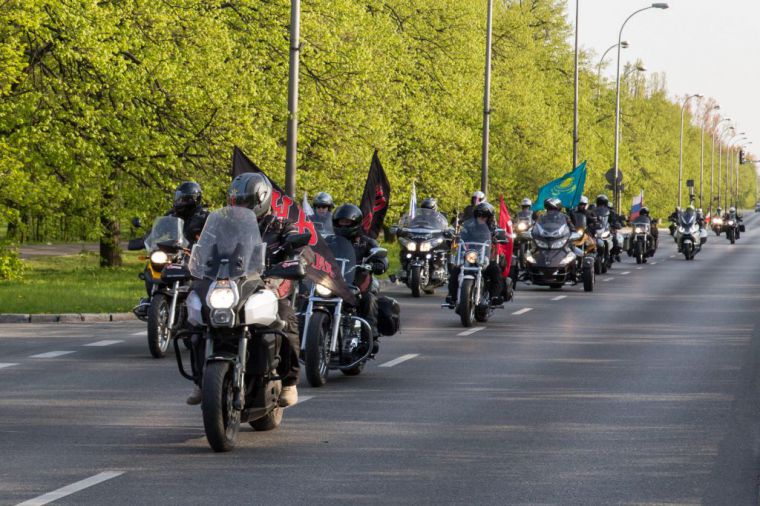 Bulgaria’s capital, Sofia, welcomed a group of members of the notorious Russian motorcycle club the Night Wolves on Friday (July 1).

Although only eight “wolves” arrived in Sofia, joined by around 20 local rockers on their “Slavic World 2016 tour”, their journey has provoked clashes between pro and anti-Russian Bulgarians.

Two groups were waiting for Vladimir Putin’s favorite bikers in front of the Alexander Nevsky Cathedral, built to commemorate Russian soldiers who died liberating Bulgaria in the late 19th century, divided by a thick police cordon.

On one side, a few hundred Pro-Russian Bulgarians, many wearing T-shirts with the face of President Putin, were waiting for “their Russian brothers”.

They were ready with the traditional gift of bread, soundtrack by Putin’s favorite band, Lube, and several priests, ready to perform a religous service.

On the other side of the police cordon, the same amount of people, but bearing the flags of Ukraine and NATO, blocked the church’s entrance to prevent the Russians from entering, shouting “Putin-Terrorist”, “This is not Moscow” and “Red Scum”.

“Satanists!” and “American prostitutes!”, their opponents answered. Before the arrival of the Russians, the two groups attempted several fights, with the numerous police reacting immediately.

A clash between supporters of the “wolves” and anti-Putin activists broke out on Thursday in the southeastern city of Burgas as well, where the bikers launched their Bulgarian tour by planting a tree as a symbol of pan-Slavic peace and visited a church.

Although the “wolves” have branded their tour of 12 Eastern European countries a mission for peace and unity between Slavic Orthodox peoples, many in Bulgaria have called it a Kremlin provocation and urged the authorities to ban it – as Poland did in May.

The group gained notoriety after participating in Russia’s “annexation” of the Crimea region from Ukraine, patrolling the streets of the Crimean city of Sevastopol. Some gang members have also joined pro-Russian militant groups in the east of Ukraine.

They maintain close relations with president Putin, who often joins their rallies on a Harley Davidson, and they receive state funding from Kremlin.

“The arrival of the so-called Night Wolves, who are under the direct protection of Putin, in Bulgaria, a country facing a constant political, economic, and even a military threat from Russia, is a despicable provocation,” Emil Georgiev, member of the liberal DEOS party told BIRN at the rally on Friday.

He added that “over the past years, russophilia in Bulgaria has started to turn into putinophilia”, and he claimed that those who had come to cheer the “wolves” could easily turn into instruments of dangerous policies.

On the other side of the rally, people were also convinced that their opponents were instruments in the hands of foreign politicians, but of Western ones.

“I came here to see Putin’s people. It’s high time the EU fell apart and a new one was created – the Eurasian Union of Vladimir Putin,” Lazar, a 23-year-old construction worker, said.

Wearing his grandfather’s peaked cap from the Second World War, covered with Russian medals, he complained about his low salary and expressed his belief that life was fairer under the Communist regime.

After waiting for hours under the burning summer sun, people could not hide their excitement when the bikers finally arrived, accompanied by a brand new white Porsche and black Hummer.

“Putin, Putin! Long live Russia,” the group cheered, as Orthodox priests consecrated the guests with holy water and the Russian anthem was played.

“Our Russian brothers have come with peace. They deserve a proper welcome,” Fr Nikolay, who had come from a village near Sofia, told BIRN.

The “wolves” have denied having any political agenda and told journalists they have nothing to do with Putin, except that they are “nationalists, just like him.

“We are Slavs, you are Slavs, we have nothing to do with politics. We are people’s diplomats”, Vitali, a Russian who joined the “wolves” five years ago, told the media.

But later on Friday, at a press conference in the Russian Institute in Sofia, Andrey Bobrovsky, the leader of the tour, said: “Putin is a great leader and a great man – the only one who has not ruled for his own benefit over the past 50 years.”

Asked if he had fought with the Russian separatists in eastern Ukraine, he denied it, but noted that “had he lived in Donbas [in eastern Ukraine], he would have certainly protected his home” – an answer which received applause from the hosts and some journalists in the room.

During the press conference, Bobrovsky received an icon as a present from the director of Bulgaria’s museum of national history, Bozhidar Dimitrov, known for his nationalistic views.

It depicted khan Tervel – called “the Bulgarian Putin” by Dimitrov’s deputy, as he “had succeeded in warding off the Islamic caliphate” in the 8th century A.D.

Meanwhile, the protesters were also happy because they had managed to prevent the wolves from lighting a candle in the Alexander Nevsky cathedral, which they had occupied for the whole day.

“Communists – out of the temple”, they said.