Home » Manchet 1 » War impossible to negotiate: Where did they put the “Karabakh” comma? 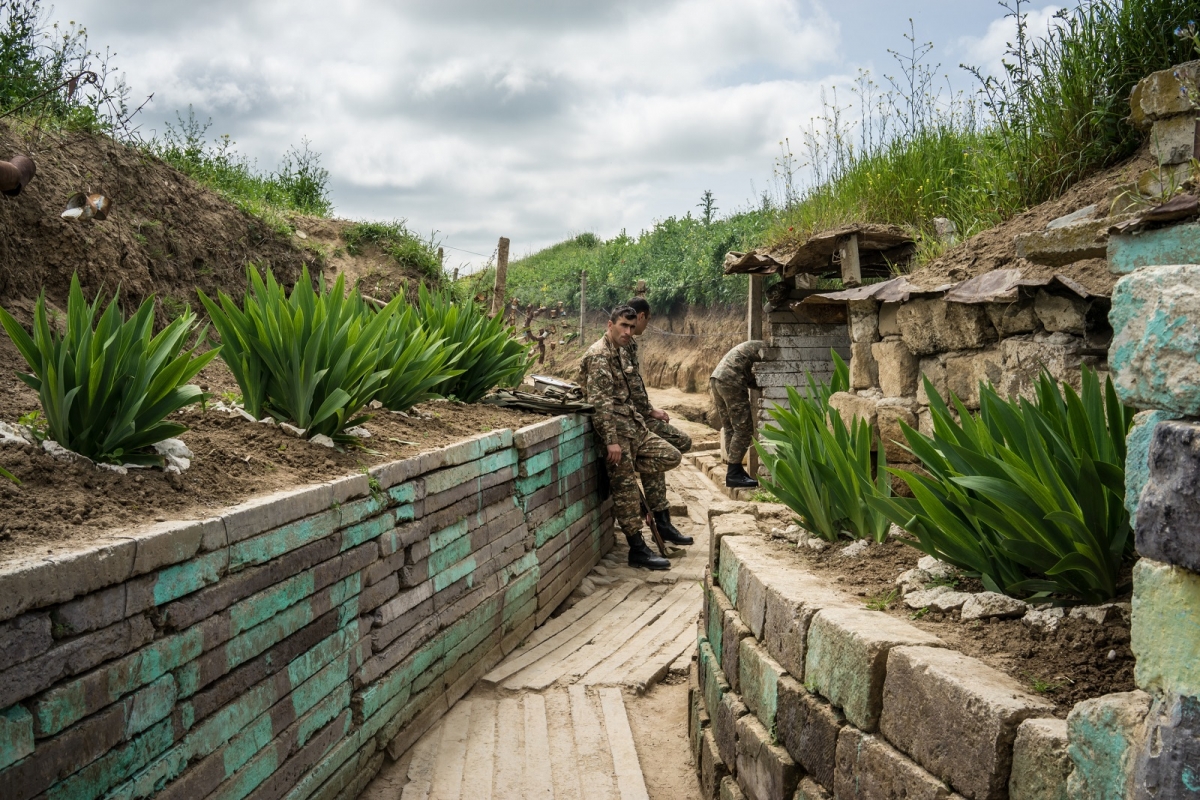 War impossible to negotiate: Where did they put the “Karabakh” comma?

Presidents of Armenia and Azerbaijan met in Saint Petersburg on June 20 at the behest of Russian President Vladimir Putin. Shortly before the meeting, Spokesperson for the Russian president Dmitry Peskov said the major goal of the talks was to develop a kind of formula for the interaction that would help prevent further escalation of the conflict. Rather a vague and general wording, considering that the issues to be discussed during the talks were not specified. The leaders did not conceal their emotions before the meeting – Serzh Sargsyan and Ilham Aliyev came to the trilateral summit as to the boxing ring. There was a palpable tension in the air. However, after the meeting with the Russian president, the opponents came out in quite different mood. Both Sargsyan and Aliyev were smiling and even shook hands in front of cameras.

What did Putin tell them to defuse the tense situation?

After the meeting, the presidents made a joint statement reaffirming their commitment to normalizing the situation on the line of contact and giving their approval to an increase in the number of OSCE observers working in the conflict zone. The joint statement also expresses the parties’ commitment to putting in place the conditions required for steady progress in negotiations on a political settlement to the conflict. The presidents made a point of their regular contacts on Karabakh and agreed to continue them in such format in addition to the efforts by the OSCE Minsk Group co-chairs who were invited to the final stage of the meeting in St. Petersburg.

As we can see, in their joint statement, the presidents just confirmed the arrangements made in Vienna on May 16 to stabilize the situation in the region, though before the meeting there was sharp exchange of statements between them. After the talks, the sides made alike positive statements. Foreign Minister of Azerbaijan Elmar Mammadyarov made an official statement dropping no single word about the “occupied territories” and “a million of refugees.” “The meeting was held in a constructive atmosphere. Azerbaijan welcomes the results of the talks in St. Petersburg. We hope that this meeting will create an opportunity for progress in the Nagorno-Karabakh conflict soon,” the Azerbaijani minister said.

Foreign Minister of Armenia Edward Nalbandian briefed media on the meetings in Saint Petersburg saying: “I can say that today’s meeting was quite useful, and with some cautiousness I can say, that it proceeded in a constructive atmosphere. Regarding some issues the presidents had reached an understanding, that if an agreement is reached on them, it will create an opportunity to push forward the negotiation process towards settlement of the issue.”

The positive statements by the conflicting sides do not fit into the real sentiments and psychological atmosphere in the Armenian and Azerbaijani publics. In fact, the final statement by the sides creates an impression that it was signed not by the leaders of the countries suffering from the heavy conflict for decades, but by good neighbors who had a little disagreement.

Meantime, Deputy Head of the Azerbaijani President’s Administration Novruz Mammadov “poured fuel on the flame” saying that Aliyev and Sargsyan agreed on a stage-by-stage settlement scheme in Saint Petersburg, which implies the exchange of the “buffer territories” around NKR to Azerbaijan for further status of Nagorno-Karabakh.

Optimism is fading away with the statements by political analysts in both Armenia and Azerbaijan.

For instance, Azerbaijani political analyst Zardusht Alizade is not optimistic about the situation. “The meeting in Saint Petersburg was held to demonstrate Russia’s critical role in the Karabakh issue, but in fact its mediation does not pursue a resolution to the conflict,” Alizade said. “It would be naïve to wait anything from that meeting. Kremlin is happy with Sargsyan, why to press him? U.S. too is happy with him. That is why I have said that the Karabakh conflict will be turned into something like the Palestinian conflict and nothing will change. In the Karabakh conflict, Russia comes out as a coach who just stands and manages the game the way it wants, while Armenia and Azerbaijan are just players. The formats, demands, and approaches may change, but the essence of the conflict will remain the same. Karabakh will neither be returned to Azerbaijan not transferred to Armenia. Karabakh will further be used by Russia to manage Armenia and Azerbaijan,” Alizade says fatefully.  At the same time, he thinks “a new war in the region is possible, though unlikely.”

In fact, Vladimir Putin does not need a new conflict strategically close to the borders of Russia.

In Armenia they do not share the optimism of the negotiators either.  For instance, political analyst Hayk Martirosyan shares some nuances of the Saint Petersburg summit with the Armenian media: “They initiated a meeting, met and maybe even had a cup of coffee together, and what? Is it possible that the presidents meet after military actions just to discuss such issue as the increase of the number of the OSCE observers in the conflict zone? The issue of Artsakh (Karabakh) has no solution in the format that is discussed now. It appears to be an unclear process. The issue can find a solution by force, the political analyst says. In his words, some extremely important processes are happening now. “Politically and historically it is not clear how it can happen that after being blackmailed, involved into a war, contacts are established and the sides welcome the results,” Martirosyan says.

The political analyst mentions a nuance the expert society is thinking over these days: “In the current situation, if the Azerbaijani side welcomes something, it cannot be positive for the Armenian side. Nevertheless, the Armenian side too welcomes the meeting outcome. There is an impression that a kind of revolution happened or we have agreed with them that they will recognize Artsakh (Karabakh) and we will give them nothing in exchange So , this is what makes us happy. Or maybe, we have agreed upon something that we prefer not to speak about so far. No country in the world, no nation wages talks on the territories. The entire Armenian nation knows this and is no longer surprised. I do not understand, we have been holding negotiations for more than 20 years, ready to cede territories, but Azerbaijan disagrees, as it wants more and unleashed war. After all this, we have to hold negotiations now. Why? Armenia must declare that it is not going to conduct talks with such country and start preparing for self-defense,” Martirosyan says.

The Russian side too has commented on the situation. In particular, Oleg Pakholkov, Russian MP from “Spravedlivaya Rossiya” (Fair Russia) Party says: “The key proof that the high-level meetings are efficient is that they no longer fire in Karabakh. I wish the mothers in Azerbaijan and Armenia no longer lose their sons in that war. I hope sooner or later the Karabakh conflict will be resolved, though both the parties set conditions inadmissible to each other. There is no military solution to the conflict. If Armenia and Azerbaijan decide to resume war, Moscow will have to interfere. Neither U.S. nor France as the mediating countries is inside the conflict unlike Russia. It is not so much because of the geographical location, but because of the big Armenian and Azerbaijani Diasporas in Russia. By the way, here they are not conflicting with each other, which mean that they can coexist. I would like that Armenians and Azerbaijanis coexisted the same way in Karabakh. This is the goal of meetings of the Azerbaijani and Armenian presidents organized by Russia,” Pakholkov says.

Here are the examples of the sentiments in the conflicting countries after the Saint Petersburg summit.  In fact, most experts think that the Vienna and the St. Petersburg meetings were not initiated to increase the OSCE mission in the conflict zone. It is clear that the sides comprehend the essence of the concessions they are ready for. Moscow’s major task now is to secure the arrangements Armenia and Azerbaijan have undoubtedly made behind the scenes.  Otherwise, it is impossible to explain the strange placidity of the sides, the more so as the mediators have suggested nothing new.

Actually, they have already put the comma in the phrase “war impossible to negotiate.” However, it appears that they think it untimely to speak about it yet.
Source: EADaily