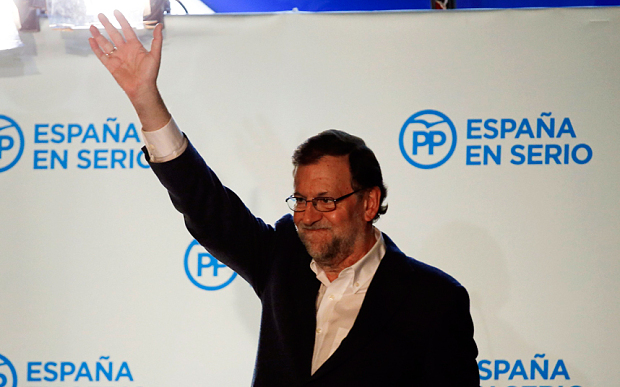 Spain’s ruling conservative Popular Party has won the country’s unprecedented repeat elections but it remains to be seen if acting Prime Minister Mariano Rajoy can muster enough support to form a new government.

The Popular Party won 137 seats in Sunday’s vote (June 26), 14 more than in December but still short of the absolute majority in the 350-seat Parliament that it enjoyed after the 2011 election.

Rajoy’s party also won the December election but no other major party was willing to help him form a government and it’s not clear if they will this time either.

The party’s leadership was to meet Monday to review its options.

The center-left Socialist Party placed second in the election, collecting 85 seats, five fewer seats than in December in its worst ever result.

Barring an unlikely grand coalition with the Socialists, Rajoy’s best option would appear to be to strike a deal with the business-friendly Ciudadanos party, which came in fourth with 32 seats.

Ciudadanos leader Albert Rivera rejected backing any government led by Rajoy following the December vote, but recently suggested he might ease that stance. That would still leave Rajoy needing the support of smaller groups to make a majority.

In third place, with 71 seats, was the left-wing Unidos Podemos (United We Can) group, which brings together the communists, the Greens and the two-year-old Podemos party that grew out of a grassroots anti-austerity protest movement.

The alliance, headed by pony-tailed political science professor Pablo Iglesias, had hoped to overtake the Socialists and break the country’s traditional two-party system.

Spain has never had a coalition government and the Popular Party and the Socialists have alternated in power for decades.

King Felipe VI will consult party leaders in the coming weeks and likely nominate one to try to form a government.

Following the December election, Rajoy acknowledged he didn’t have any support to form a government and renounced the opportunity to even try. The king then called on the second-placed Socialists to try, but they were also unable and the monarch eventually called a repeat election.

“With his big victory, Rajoy now certainly has a stronger hand than after the December election,” Antonio Barroso, a London-based analyst with the Teneo Intelligence political risk consulting group, said in an analysis note Monday. “However, it is unlikely that other parties will rapidly give him their support.”

Speaking at a victory rally, Rajoy said “We won the election. We demand the right to govern.”

He said the party would begin talks with other groups immediately.

The Popular Party had championed its role in Spain’s strong economic recovery following a severe crisis and had to weather much criticism over high unemployment, cuts in government spending on welfare and education and unrelenting political corruption scandals.