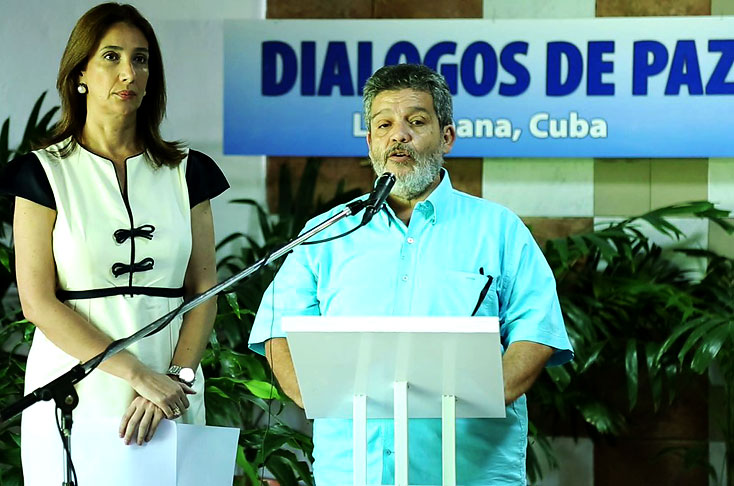 Colombian congressman Ivan Cepeda regarded Wednesday (June 22) the agreement on the bilateral cease of fire between the Colombian government and the rebel forces of the Colombia Armed Revolutionary Forces-People”s Army (FARC-EP).

“This is a trascendental decision to end up with a part of the old conflict in Colombia, the only in the western hemisphere, and it remains to initiate conversations with the ELN”, Cepeda commented to Prensa Latina.

This Wednesday governmental spokesmen and of the Revolutionary Armed Forces of Colombia-People’s Army (FARC-EP) informed to the public opinion that they reached an agreement to silence all the guns and begin the laydown of weapons or disarmament of these insurgent groups.

The joint communique spread in the Cuban capital adds that both delegations managed to conciliate positions also on the safety guarantees for now fighting during the stage of demobilization and reinstatement to the civil life, as well as concerning the clash to criminal organizations.

“It is the moment to begin a new way and remembering a phrase of writer Gabriel García Márquez he said: also it is a time of the second opportunity on the ground for Colombia,” the legislator emphasized for the Alternative Democratic Pole, major national left convergence.

The senator, one of the promoters of the conversations with the rebellion, underlined that such a result is a fruit of the efforts not only of the Government and of this rebel movement, but of many sectors of the society, sympathizers with the peace process, as well as of the support of the international community.

After being grateful for the world solidarity, Cepeda emphasized the contribution of Cuba and Norway, guarantors of the dialogues, and of Chile and Venezuela, accompanists of the same ones.

Since 2012 representatives of the Colombian Executive and of the FARC-EP converse in Cuba to find a compound solution in the long conflagration; in the course of these years they achieved consensuses, also, in the topics of integral rural reform, political participation, combat against the illicit traffic of drugs and victims.

It remains now to close subpoints dependent on previous sections and elucidate the related thing to the implementation, cross-check and refrendación of the agreed thing, the sixth topic of the agenda.

To install the table of formal meetings with the National Liberation Army (ELN), also involved in the contest, is another of the steps to execute to conquer a finished peace, thinks Cepeda.

The complete content of the recent agreements will be revealed tomorrow in an event in Havana, at which there will be the presence of Colombian President Juan Manuel Santos, several of his Latin-American counterparts and personalities as the Secretary-General of United Nations, Ban Ki-moon.