Home » Manchet 3 » Far East patience: US-led coalition vs China and its allies – where Russia is a joker 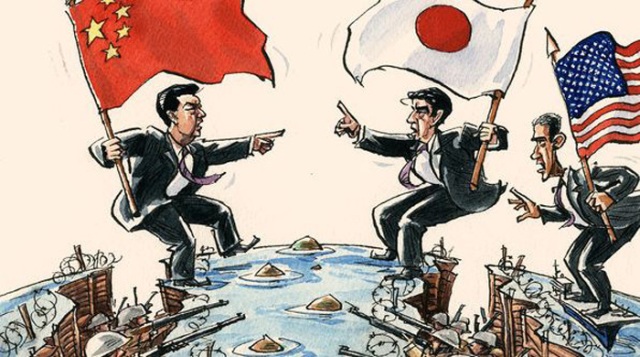 Far East patience: US-led coalition vs China and its allies – where Russia is a joker

A complicated diplomatic game is developing the Far East. In their fight for leadership in the region, the United States and China are hunting for allies.

Passions for the sea

The Americans are trying to prevent the Chinese from “militarizing” the South China Sea, where the latter have territorial disputes with almost all of their neighbors and where they are building lots of islands, ports and flight strips. They say they are building the island for tourism but they may as well use them for military purposes – for today, the South China Sea area is believed to be one of the hottest and potentially explosive regions in the world.

The Americans are no less active. Their planes keep patrolling the area on the pretext that they just want to guarantee the security of local trade routes. The region’s annual cargo turnover amounts to $5 trillion. Naturally, he who will gain control over that sea will get the upper hand in global economics and politics.

This is not a new conflict. Simply, this year it is beginning to boil and may blow up at any moment.

The Americans and Chinese are already showing their muscles. Their diplomats are actively looking for allies. In June 2016, the White House attempted to form a trilateral anti-Chinese coalition, involving Japan and… India.

The sides have conducted joint military maneuvers in the Philippine Sea. The Indians sent there two frigates, a missile corvette and a support ship. On the way, they entered Vietnamese and Philippine ports.

The sides learned how to rebuff underwater and air attacks by an imaginary enemy and to search for and rescue own troops. The maneuvers involved the USS John C. Stennis supercarrier and were watched by a Chinese look-out boat – as it is not a secret who that “imaginary enemy” is. In the end, the Chinese expressed hope that the maneuvers would contribute to peace and security in the region.

The United States and Japan have been military partners for decades. India’s involvement shows that that country has quite serious ambitions.

“Americans are looking for those who can share the burden. A strengthened three-way partnership among the U.S., Japan and India is “an important strategic shift,” C. Raja Mohan, director of the Carnegie Endowment for International Peace’s India center, told the Wall Street Journal.

According to US congressman George Holding, it is time for the United States and India to deepen their strategic partnership, especially in the Indian-Pacific region.

In order to keep India involved, the White House is even ready to offer it the status of a major non-NATO ally, while the US Congress has already approved changes allowing the Americans to sell the Indians arms and technologies on the terms offered to NATO members.

Recently, the sides drafted a logistics support agreement implying that they will be able to use each other’s military bases. They are also actively negotiating on a Communications and Information Security Memorandum and an Agreement for Geospatial Cooperation.

The Indians share the concerns of the Americans and China’s South Asian neighbors. They can’t like China’s growing influence in the region. In 1963, they had a war with the Chinese. They claim that in 2012-2015 the Chinese violated their border for 600 times. Last year alone, Indian seamen had as many as 22 encounters with their Chinese colleagues.

In the face of China’s growing expansion, India is actively modernizing its navy. So, in a couple of years, it may become a strong force outside the Indian Ocean.

The Indians are improving their relations with Japan. In Dec 2016, the sides agreed to carry out a number of joint infrastructure projects in South Asia. Their key goal here is to prevent China’s expansion.

Of course, there are people in India who advise their authorities to watch out for the Americans. They still remember the times of the cold war, when the Americans imposed sanctions against the Indians because of their nuclear tests.

Not all Indians want to depend on the unpredictable Americans. Several years ago, Obama encouraged the Chinese to be more active in South Asia. He was among the key opponents of Bush’s policy of rapprochement with India. Now he is a firm believer that his country’s economic future is in Asia.

Today, India is the second biggest market for the US military industry after Saudi Arabia. Over the last five years, India has bought from the Americans arms worth a total of $17 billion. In 2009-2015 US-Indian trade grew by 90% to $107 billion. As a result, India jumped from the 21st to 11th rank on the list of United States’ trade partners.

One more problem is that the Indians stick to nonalignment policy and will hardly join any alliance. But, on all the other levels, cooperation with them is possible.

In early June, the Indian prime minister visited the United States and spoke in the Congress. According to National Interest, such honor is granted only to special friends.

China’s neighbors claim almost 80% of the South China Sea and would be happy to get support from the Americans. If united, Vietnam, Taiwan, the Philippines, Malaysia and Brunei may become a serious rival to China. So, here US diplomats have lots of things to do. But, during its last meeting, ASEAN failed to adopt a joint approach towards the situation in the South China Sea and this have given the Chinses an advantage.

The Chinese have already created strongholds for expansion. The next step may be the decision to create an Air Defense Identification Zone as they did in the East China Sea two years ago.

The key problem of the Americans here is that they are far from the region. Their only countermeasure may be intensified patrolling. But this may provoke a conflict.

One option is to appeal to an arbitration court. The Philippines have already complained of China to the Permanent Court of Arbitration in The Hague. The Filipinos are angry that the Chinese prevent their fishers to fish near Scarborough, a reef also claimed by Taiwan. They have also allowed the Americans to use their five military bases.

Of course, India is not the only potential ally for the Americans. The other one is Vietnam, who has old territorial disputes with China. Last time the sides warred in 1979. In 2012, they were also close to a war.

So, it was an easy job for US President Barack Obama to convince his Vietnamese counterpart Tran Dai Quang to be more active against China in the region. As a stimulus, he suggested lifting the years-long ban on the sale of arms to Vietnam. Experts expect this to lead to a new arms race in the region.

South China Morning Post quotes a Chinese military expert as saying that growing military contacts with the United States can make Vietnam a serious rival for China in the South China Sea and a serious figure in the US-led anti-Chinese coalition.

According to SIPRI, today Vietnam is one of the biggest arms importers in Asia. In 2011-2015, its military expenses grew by 7 times. Last year, the Vietnamese bought 3% of all arms in the world.

Experts expect Vietnam to follow the example of the Philippines and to take the Chinese to court. This may open Pandora’s box and lead to a series of mutual claims – for Vietnam and the Philippines have territorial claims not only against China but also against each other.

If China establishes the Air Defense Identification Zone in the South China Sea, the Philippines, Vietnam and Malaysia may do the same and may even offer their territories for US military bases.

According to SCMP, the Chinese are also acting. One of their key hopes is Malaysia. This spring their defense minister said that China was committed to strengthen its military ties with that country and also with Myanmar and Thailand.

One more potential ally is Indonesia. Quite recently the Chinese defense minister met with his Indonesian counterpart in Vietnam. In Mar 2016, the sides had a conflict following the Indonesians’ attempt to capture a Chinese trawler that was fishing in their economic zone. Now that dispute is settled. So, Indonesia can well be an ally for China.

For the time being, the United States’ coalition is stronger than China’s alliance. The Chinese key ally here is Russia. And even though these two powers have certain contradictions in the region, they are ready to cooperate against a common enemy. Their alliance is the last thing the Americans would like to face in the region. So, they will try their best to prevent it. They have a couple of “carrots” for this purpose. For example, they may suggest lifting the anti-Russian sanctions.

The situation in the region is quite tense. But we still hope that those playing this Far East patience will manage to avoid the Thucydides Trap – when a war becomes inevitable due to fear caused by a rising power in an established power. At the times of Thucydides, the powers were Athens and Sparta, now, they are the United States and China.

Experts do not expect things to improve soon but, on the other sides, the key players, the Chinese and the Americans are cool-headed enough to realize that they must avoid a global conflict in the region. As regards local conflicts, unfortunately, they are quite possible.