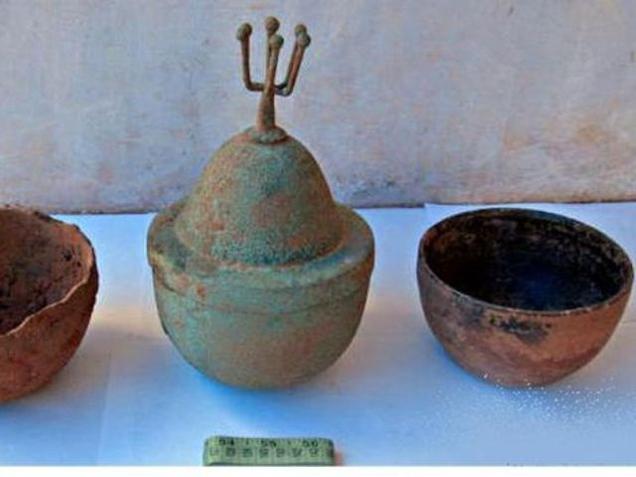 Objects will be shifted to Pazhassi Raja museum in Kozhikode

The discovery of a burial urn along with three bowls and a metal artefact from a courtyard of a house at Vellakunnu, near Panoor, in Kannur district is expected to provide new insights into the megalithic times in north Kerala.

The 90-cm-high urn has a ceramic lid with a diameter of 77 cm in the middle. “One remarkable peculiarity of this burial jar is the presence of a globular copper oblique bronze piece inside it,” says N.K. Ramesh, an anthropologist-cum-archaeologist, who is working as senior assistant at the Museum Project, Department of Cultural Heritage Studies, Thunchathu Ezhuthachan Malayalam University, Tirur.

The bowls and a metal artefact — vestiges of a bygone age — discovered from the courtyard of a house at Vellakunnu, near Panoor, in Kannur.

He says that it is for the first time a globular copper oblique bronze has been discovered in the megalithic context in the State. “Similar type of evidence has been discovered at Aathichanallur, an archaeological site in Tirunelveli district of Tamil Nadu. Probably, the relic might have been a sacred one, used for the worship by megalithic people,” he says.

Mr. Ramesh says that the metal artefact has seven antenna-like projections on the top and morphology of the object testifies that it is a product of an advanced metallurgical technology. “Likewise, six terracotta hooks were found inside the neck of the urn, used either for hanging or suspending articles.

Bone features and river sand were also detected inside the urn. An excavation has been planned at the site,” he adds. A group of children playing in the courtyard of the house of Mangalassery Govindan spotted a hole and subsequently the jar was exposed.

S. Gregory, Professor, Department of Anthropology, Kannur University, who was informed of the discovery, had asked Mr. Ramesh to study the findings. Similar artefacts were discovered by the professor and his team at the same land earlier.