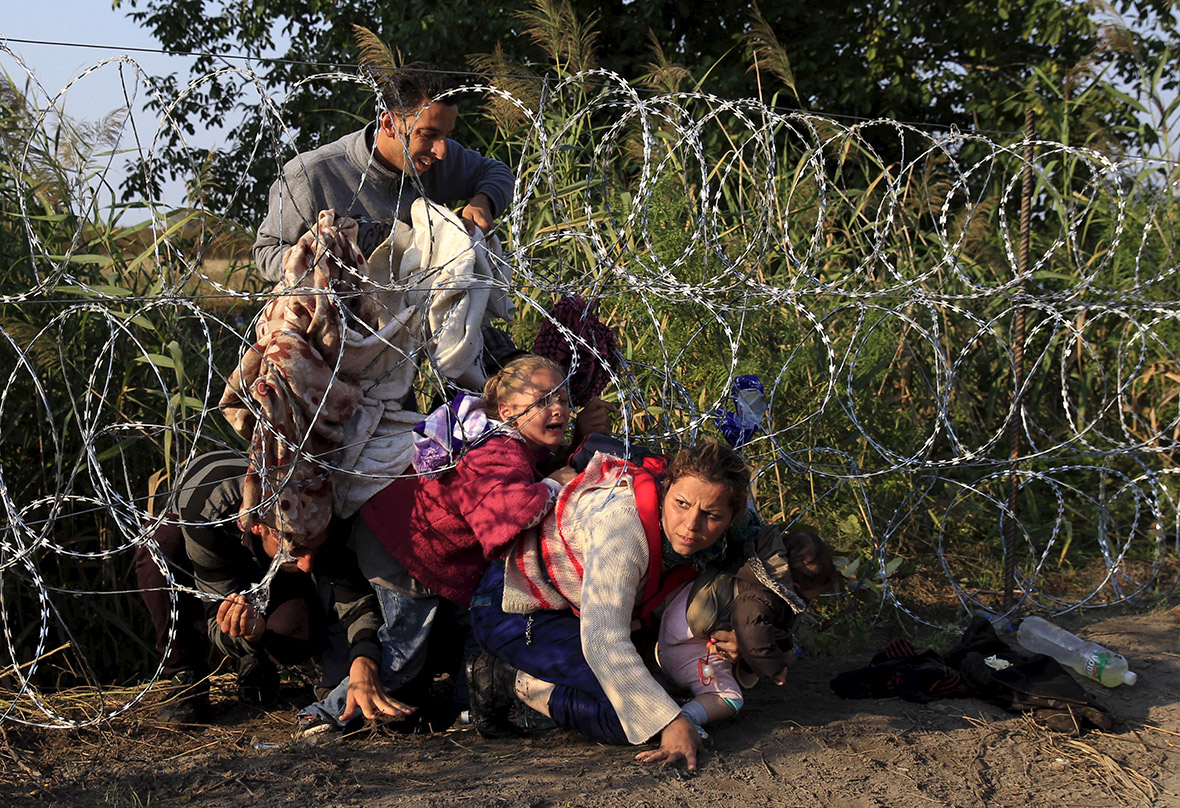 27 August 2015: Syrian refugees go under a fence, crossing into Hungary at the border with Serbia near Roszke

28 August 2015: Hungarian police detain a Syrian migrant family after they enter Hungary at the border with Serbia

3 September 2015: Hungarian police stop a family of refugees as they attempt to run away at the railway station in the town of Bicske

8 September 2015: TV camerawoman Petra Laszlo trips a man carrying a child as they try to escape from a collection point in Roszke, Hungary. Laszlo was fired after videos of her kicking and tripping up migrants fleeing police spread in the media and on the internet

10 September 2015: A Syrian refugee kisses his daughter as he walks through a rainstorm towards Greece’s border with Macedonia

11 September 2015: A Hungarian policeman pleads with migrants to move away as the bus they are clamouring to get on is full

12 September 2015: A Syrian refugee holding a baby swims towards the Greek island of Lesbos

20 September 2015: Migrants and refugees desperately try to board a train heading for Zagreb from Tovarnik station in Croatia

22 October 2015: An Afghan man walks through rain and fog on his way to the nearest registration camp on the Greek island of Lesbos

30 October 2015: A refugee prepares to hand over a toddler to a volunteer lifeguard as a half-sunken catamaran – carrying around 150 refugees, most of them Syrians – arrives on the Greek island of Lesbos after crossing part of the Aegean sea from Turkey

23 November 2015: An Iranian migrant – with his lips sewn together – sits on rail tracks at the border between Greece and Macedonia as Balkan countries begin filtering the flow of migrants to Europe, granting passage to those fleeing conflict in Syria and Afghanistan but turning back others from Africa and Asia

26 November 2015: A man is chased by Macedonian police officers after he tried to cross the Greek-Macedonian border. Countries along the Balkan route taken by hundreds of thousands of migrants seeking refuge in western Europe began filtering the flow, granting passage only to those fleeing conflict in Syria, Iraq and Afghanistan

30 January 2016: A man stands by the body of a child washed up on a beach in Canakkale wafter a boat sank in the Aegean Sea while refugees and migrants were trying to cross from Turkey to Greece

7 March 2016: A child stands among razor wire close to a gate at the Greek-Macedonian border

7 April 2016: A Macedonian policeman uses his baton to prevent migrants and refugees from breaking through a fence on the Greek-Macedonian border

4 May 2016: Children’s shadows are seen near graffiti in a makeshift camp for migrants and refugees on the Greek-Macedonian border

17 April 2016: Children look to the sky as they play with a kite in a field near the Greek-Macedonian border