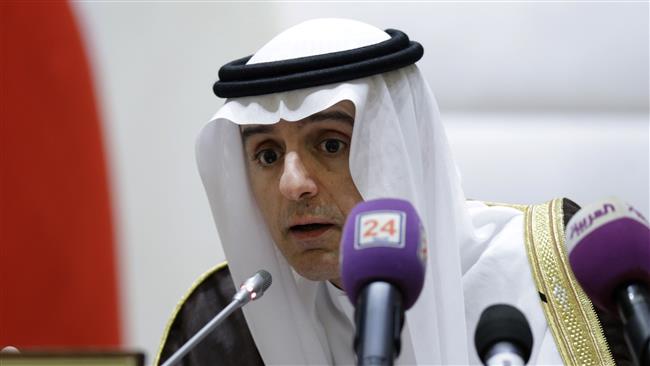 Saudi repeats call for US strikes on Syrian government

The Saudi foreign minister has repeated Riyadh’s call on the US to carry out airstrikes against the Syrian government, echoing a similar request by dozens of US diplomats who broke ranks with the White House to push for military action against Damascus.

During a press briefing at the Saudi Embassy in Washington on Friday (June 17), Adel al-Jubeir said the Arab monarchy has long been pushing for a US military campaign to overthrow Syrian President Bashar al-Assad.The Saudi minister added that from the very start of the crisis in Syria, Riyadh has strongly favored “a more robust policy, including air strikes, safe zones, a no fly zone, a no drive zone.”

He went on to say that the kingdom had called for arming Syria’s so-called “moderate opposition” with ground-to-air missiles and reiterated an offer to deploy Saudi special forces as part of any US-led operation against the Damascus government, which has been making back-to-back gains against the Daesh Takfiri group.

Jubeir’s comments came after 51 US State Department officials signed an internal document, known as the “dissent channel cable”, this week, calling for targeted military strikes against the Syrian government.

“Failure to stem Assad’s flagrant abuses will only bolster the ideological appeal of groups such as Daesh, even as they endure tactical setbacks on the battlefield,” reads the cable, critical of US President Barak Obama’s policies towards the Syrian crisis.

The State Department has acknowledged the existence of the cable as confidential diplomatic communication, but did not comment on its contents.

Meanwhile, Russia slammed the so-called internal document and warned that such attempts to oust Assad would not “contribute to a successful fight against terrorism.”Kremlin spokesman Dmitry Peskov further said that “this could plunge the region into complete chaos.”

Russian Deputy Foreign Minister Mikhail Bogdanov also censured the proposed attacks against Damascus, saying they would be “at odds with the UN resolutions.”

“We need to negotiate and reach a political resolution on the basis of international law, which was agreed upon at the UN Security Council,” Bogdanov added.

The United States and its allies formed a coalition that has been conducting airstrikes against what are said to be Daesh terrorists inside Syria since September 2014 without any authorization from Damascus or a UN mandate. The coalition has repeatedly been accused of targeting and killing civilians. It has also been largely incapable of fulfilling its declared aim of destroying Daesh.

Daesh Takfiri terrorists, who were initially trained by the CIA in Jordan in 2012 to destabilize the Syrian government, are engaged in crimes against humanity in the areas under their control.

Syria has been grappling with a deadly conflict it blames on certain foreign states for over five years. UN special envoy for Syria Staffan de Mistura estimates that over 400,000 people have been killed in the conflict, which has also displaced over half of the Arab country’s pre-war population of about 23 million. The militancy has also taken a heavy toll on the country’s infrastructure.