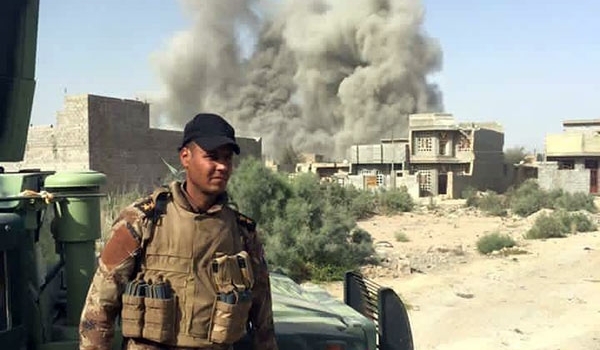 The Iraqi government troops continued their advances in the Southern part of the city of Fallujah, and seized back more strategic regions after heavy clashes with the ISIL Takfiri terrorists, media reports said.

“The Iraqi army purged terrorists from al-Shafaq residential area in Southern Fallujah and after inflicting heavy losses on the ISIL terrorists hoisted the Iraqi flags over buildings there,” the Arabic-language media outlets quoted informed military sources as saying on Wednesday (June 15).

The Iraqi army’s Regiment 17, meantime, seized back al-Za’aneseh, al-Zayban and al-Atr villages in tough battle with the ISIL terrorists.

On Sunday, the Iraqi government troops continued their advances in the Southern part of Fallujah, and seized back two strategic regions after heavy clashes with the ISIL Takfiri terrorists.

“Al-Falahat and al-Sabihat region in the Southern part of Fallujah city are now under the control of our forces,” Anbar Operations’ Commander announced on Sunday.

Meantime, the commander of Iraqi Federal Police Major General Raed Shaker Judat said that a dozen ISIL terrorists were killed in the clashes over al-Falahat and al-Sabihat regions.

The military vehicles of the terrorists were also destroyed in the army’s offensive.

On Saturday, military sources announced that the Iraqi army and tribal forces have started fresh operations to win back two strategic regions in the Western part of the city of Fallujah.

He noted that the Iraqi tribal forces will help the army to conduct its large-scale operations in Western Fallujah.