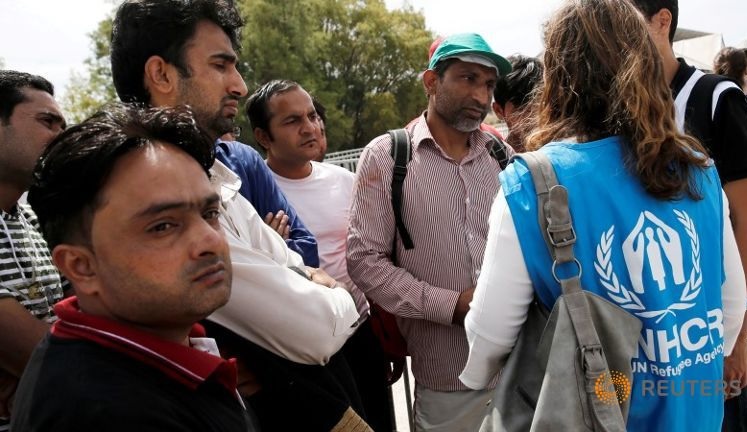 Dozens of migrants stuck in Greece queue for access to asylum

Dozens of migrants and refugees stuck in Greece queued up in Athens on Monday (June 13) to register for access to its asylum system, a new process that Greece hopes will speed up their relocation to other EU member states or reunite them with family elsewhere.

Some 48,000 refugees and migrants are stranded on the Greek mainland by the closure of Balkan borders, which has shut the main overland route used last year by a million people from Syria, Afghanistan, Iraq and beyond headed for western Europe.

Some 1,200 people have been registered in the three days since the EU-funded scheme was launched. Authorities hope to register 1,400 people a day from two sites, the head of Greece’s asylum service, Maria Stavropoulou, told journalists.

“It is going to be the first step either for relocation to other member states, or to family reunification, or to apply for international protection in Greece and either getting it or not,” Stavropoulou said.

Refugees and migrants wait to take part in a pre-registration process that gives them access to the asylum procedure, at the premises of the disused Hellenikon airport, in Athens, Greece, June 13, 2016.

Once individuals complete the so-called “pre-registration”, they are granted a temporary right to remain in Greece, and access to basic services.

One of two pre-registration sites has been set up at the capital’s crumbling former airport at Hellenikon, home also to now-derelict Olympic hockey and baseball venues from when Greece hosted the Games in 2004.

About 3,600 refugees and migrants, among them many young children, are currently living in abandoned buildings in the sprawling complex, or in tents pitched among the weeds.

A makeshift banner written in black paint hoisted above one of the gates directs visitors to “Hockey – Baseball – Refugees”.

Rights groups have described conditions at Hellenikon and other Greek camps as unfit for humans. Fights are not uncommon in food queues and elsewhere.

Authorities hope the new process will help to ease tensions.

“The level of frustration we hope will go down; they will get a sense that something is in the making,” Stavropoulou said. “Some people might actually want to go back home, and here they have the option also of saying so.”