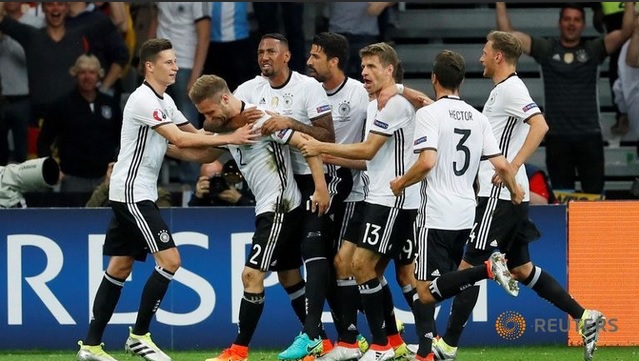 Shkodran Mustafi and Bastian Schweinsteiger were on target as world champions Germany defeated Ukraine 2-0 in their Euro 2016 Group C opener on Sunday (June 12).

The Germans, eyeing their fourth Euro title and their first since 1996, opened the scoring when central defender Mustafi, starting in place of the injured Mats Hummels, rose high to head in a pinpoint Toni Kroos free kick in the 19th minute.

Joachim Loew’s men, who also lost central defender Antonio Ruediger to injury earlier this week, were far from convincing and had keeper Manuel Neuer to thank for producing a string of superb one-handed saves in the first half.

Substitute Schweinsteiger then made sure of victory when he scored from close range late on.