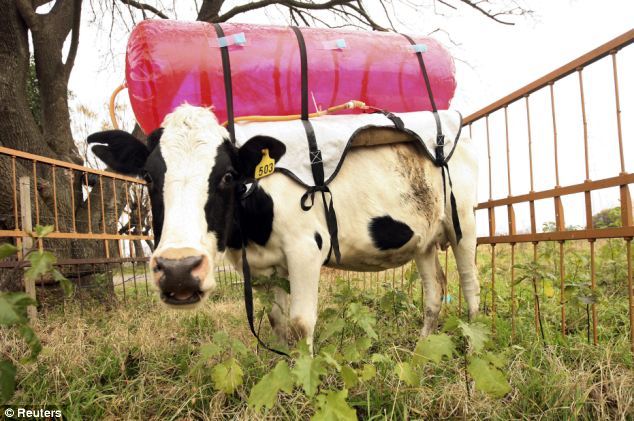 On June 9, the US administration stated that it would make a multi-pronged attack on cow flatulence, in an attempt to cut methane emissions.

As a result, windy cows have come under renewed scrutiny by scientists, who plan to capture their harmful emissions and convert them into ‘green’ energy.

But scientists in Argentina believe they have come up with a solution – cow backpacks that can be used to trap the animal’s natural gas.

The ‘fartpacks’ extract 300 litres of methane a day from a tube inserted into the cow’s digestive tract and convert it into enough energy to run a car for 24 hours.

The tube running to the animals’ stomachs collects the gas inside the backpacks, which are then hung from the roof of the corral for analysis.

The systems have been under development by Argentina’s National Institute for Agricultural Technology (INTA) for a number of years and are still at proof-of-concept stage.

INTA’s Pablo Sorondo told Ben Schiller atFastCoExist that the project is not ongoing, but he hopes the technology will one day be used on a much larger scale.

‘Imagine a future farm with a couple of these cows used to provide energy to satisfy the farm’s needs,’ he said.

For years, researchers have said that the diet of dairy cows could be changed to make them produce less methane – a potent greenhouse gas.

Methane is 23 times more potent than carbon dioxide in trapping heat in the atmosphere and can be found in animal waste, landfills, coal mines and leaking natural gas pipes.

The White House has proposed cutting methane emissions from the dairy industry by 25 per cent by 2020.

Cows are by far the biggest producers, contributing to around 25 per cent of all methane produced on the planet.

As one of the biggest beef producers with some 55 million heads of cattle, around 30 per cent of Argentina’s total greenhouse emissions could be generated by cows.

As well as fartpacks, scientists are working to develop new diets for cows that could make it easier for them to digest food, moving them away from grains to plants like alfalfa and clover.

An earlier study found that by using tannins, researchers can reduce methane emissions by 25 per cent.