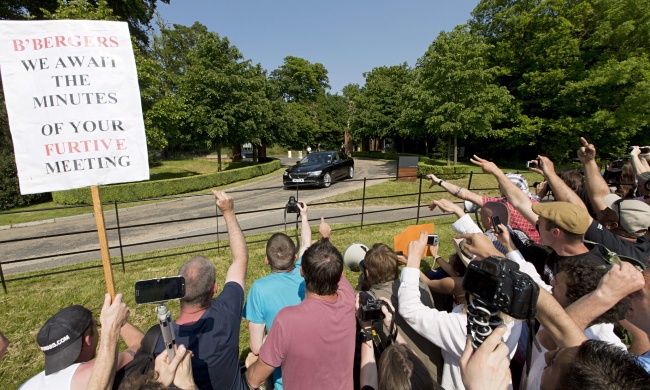 The Bilderberg group meets in Dresden

On June 9th, the regular meeting of the Bilderberg Club opened in Dresden. This forum of representatives of the global plutocracy will last for three days. As usual, globalists are protected not only by the police, but also by the military, from the press and unwanted guests. On the agenda are the most burning questions: what to do with Russia and China, Syria and the Middle East, the future of the EU and the prospects of Brexit, migration and the growing popularity of right-wing Eurosceptic parties in Europe, Donald Trump, the geopolitics of energy resources and global poverty.

A Forum of Globalists
The Bilderberg Group is one of the most secretive gatherings of the world globalist elite. It was created in 1954, when the heads of major Western corporations, politicians and representatives of the security services gathered in the Dutch town of Oosterbeek. The purpose of the Bilderberg Group was the convergence of European and American elites, and promotion of ideas of Atlanticism. From the outset, this initiative was supported by the CIA, the Rockefeller family and globalist circles of the US and UK. The purpose of the Bilderberg Group is securing global domination for the Atlanticists, and a gradual transition to world government. The forum is closely associated with other globalist institutions: the American Council on Foreign Relations, the British Royal Council on Foreign Relations, and the Trilateral Commission, the latter of which bringing together representatives of the United States, Europe and Japan.
The Participants
This year, the meeting involved 125 people, according to the official announcement of the Bilderberg group. Among them is the patriarch of American realism, Henry Kissinger, as well as the king of the Netherlands, representatives of leading corporations, European and American media. The meeting is surrounded by an aura of secrecy. At Bilderberg gatherings, the Chatham House Rule is used: all participants are free to do anything with the information received, but they cannot reveal the sources of information.
Threats to globalism
The agenda of the Bilderberg meeting reflects which trends in the contemporary world, according to globalists, threaten their dominance. It is primarily Russia, which is a challenge to US hegemony, China’s power growth, the EU crisis and the possibility of member states withdrawing, Donald Trump and the growing popularity of Continentalists, sovereigntists and the eurosceptic trend in Europe that can question the Euro-atlanticist orientation of their countries.