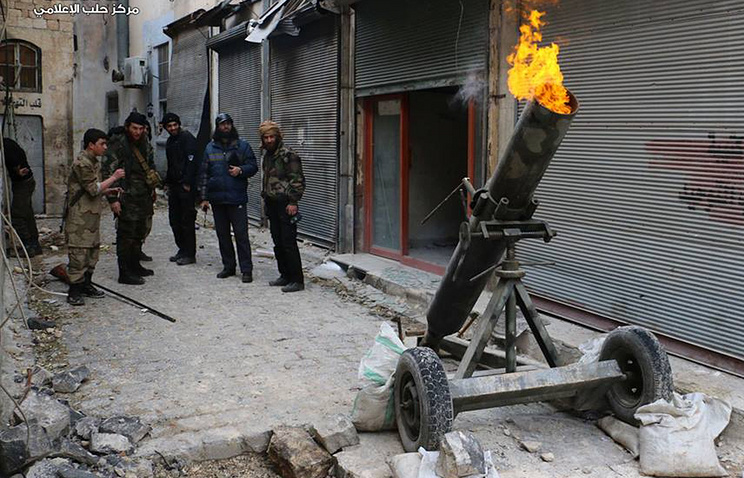 Five civilians were killed and more than 50 others were wounded as militants of the Jabhat al-Nusra terrorist group (outlawed in Russia) shelled Aleppo using gas balloons laden with explosives, a representative of Russia’s center for reconciliation of the warring parties in Syria said on Thursday (June 9).

Some 20 residential houses were damaged in the attack on a market in the city’s Meydan district. “This is not the first case when militants of Jabhat al-Nusra targeted the areas of mass concentration of citizens of the city expecting to have a great amount of victims,” the representative said.

It was earlier reported that Jabhat al-Nusra last night attacked the settlement of Handrat and Aleppo’s Sheikh Maqsood district.

“Gunmen used small arms, grenade launchers, anti-aircraft mounts and mortars to attack positions of the government troops and militias. Attacks continued for more than three hours and stopped only by dawn,” the source in the reconciliation center said, noting that terrorists had suffered losses.

Over the past 24 hours, gunmen from Jabhat al-Nusra terrorist group have attacked settlements in the provinces of Idlib, Latakia, Hama, Damascus and the eastern area of Al Manshia in Daraa and a roadblock on the entry to the settlement.

A ceasefire regime took effect in Syria on February 27. Shortly before, the UN Security Council adopted a resolution supporting a cessation of hostilities. The document drafted by Russia and the United States was backed by all 15 Security Council member states.

Russia takes an active part in the Syrian settlement effort. It helps Syria’s authorities fight terrorists and has conducted mine clearing work in the ancient city of Palmyra.
Source: TASS