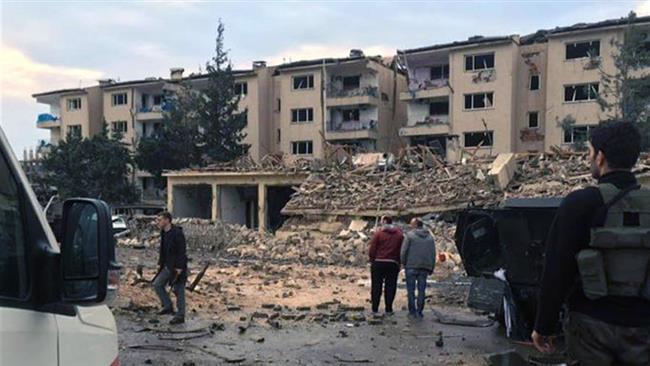 A car bomb attack by Kurdish militants on a police station in southeastern Turkey killed three people and wounded more than 30 on Wednesday (June 8), Prime Minister Binali Yildirim said, a day after a bomb targeting police in Istanbul killed 11.

This photo taken on March 4, 2016 shows the scene after a car bombing and rocket attacks in Nusaybin district of Mardin province.

The explosion in the town of Midyat destroyed the facade of a five-storey block, damaged other buildings, and sent a plume of thick black smoke rising over the area. Hospital sources said police and civilians were among the wounded.

The town is in Mardin, a province bordering Syria and part of Turkey’s largely Kurdish southeast, where the PKK has waged a three-decade insurgency for Kurdish autonomy. Violence has spiralled since a ceasefire collapsed almost a year ago.

The unrest has been fuelled by the war in Syria. Turkey says the PKK – considered a terrorist organisation by Ankara, the European Union and the United States – has deep ties to the Syrian Kurdish YPG militia fighting just across the border.

The groups do not deny links. The PKK founded the YPG as a Syrian organisation a decade ago and both are inspired by Abdullah Ocalan, who led the PKK from inception and lived in Syria shortly before his capture in 1999.

Ambulances rushed to the scene of the blast and reinforcements from the security forces were being sent to the area from around Mardin province, security sources said.

“My nation should know that the state of the Turkish Republic is strong. It is one and united no matter what the terrorist organisation does,” Yildirim said in Istanbul, after visiting those wounded in the previous day’s attack.

“Whether they carry out suicide bombings in our cities, whatever methods they use, they can never tire this nation and can never pull us back from this honourable fight.”

There has been no claim of responsibility for Tuesday’s attack in Istanbul, in which a car bomb ripped through a police bus during the morning rush hour. But Kurdish militants have staged similar attacks on the security forces, including in Istanbul and the capital Ankara.

Security concerns were already hitting tourism and investor confidence in Turkey. Wars in neighbouring Syria and Iraq have fostered a home-grown Islamic State network blamed for a series of suicide bombings, while Kurdish militants have increasingly struck beyond their usual targets in the southeast.

Yildirim said six police and five civilians were among the dead from Tuesday’s attack, which he said had targeted riot police units responsible for security at the nearby Istanbul University as they changed shifts.

Two police officers and one civilian were killed in Midyat, he said.

“The murderer is the PKK organisation. This hasn’t surprised us, but the circle around them is slowly narrowing. Both in the cities and in rural areas, we will continue to fight them decisively,” he said.