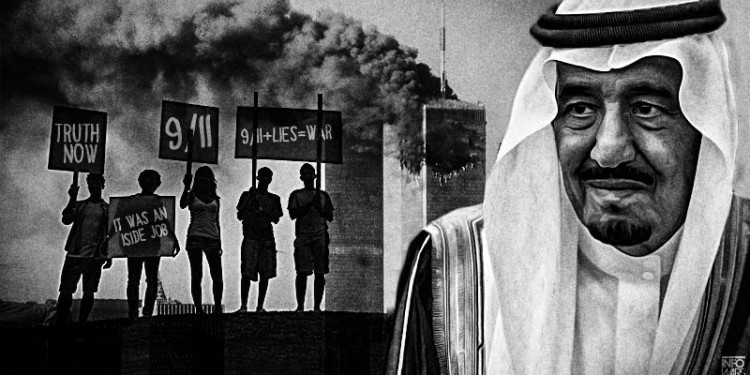 Saudi complicity in 9/11 is possible—US incompetence is certain

These are trying times forSaudi Arabia. In January the Iranian nuclear deal went into effect, granting Iran a limited ability to enrich uranium along with significant sanctions relief. Unsurprisingly this raised concerns in Riyadh, Saudi Arabia’s capital, that the kingdom’s main rival in the region was moving closer to a nuclear weapons capability. Moreover, freed from heavy economic sanctions, Iran might soon have more cash to strengthen its already-potent network of Middle-Eastern proxies. In Syria, Iran’s long-time ally Bashar al-Assad remains in power, despite years of Saudi opposition to his regime, and shows no sign of leaving anytime soon. Likewise in Yemen, the Iranian-aligned Houthi rebels seized control of the the country’s largest city Sana’a in a coup. Despite a military intervention by Saudi Arabia last year, they still haven’t budged.

Rights groups and the United Nations have strongly condemned the Saudis for targeting civilians in Yemen—Human Rights Watch alleges that the Saudis are possibly committing war crimes. The British and American governments have been criticized for assisting the Saudi air campaign with arms sales. The kingdom’s human rights record has also sparked outrage, especially the planned beheading and crucifixion (yes, that’s right) of a young activist. Then there is Saudi Arabia’s apparent support for Sunni religious extremism, which has spurred the US Congress into action. One new bill is currently in the works that would place restrictions on military aid. Another, which allows state-sponsors of terror to be sued in US courts, has just passed the Senate. This second bill came after relatives of 9/11 victims tried to sue the kingdom for supporting the attackers, but had their case dismissed on grounds of sovereign immunity.

That lawsuit might get a further boost this month, as President Obama looks set to declassify secret portions of an otherwise public 2002 congressional report which apparently document allegations that the 9/11 hijackers received assistance from Saudi Arabia. That report (not to be confused with the later 9/11 Commission) was the product of a joint inquiry by the House and Senate. The Bush administration insisted on classifying 28 pages of the document on national security grounds. According to former Senator Bob Graham, who was co-chairman of the inquiry, these so-called “28 pages” reveal that the Saudis provided the 9/11 attackers with a support network inside the US prior to the attacks. It is already well-known that 15 of the 19 hijackers were Saudi Arabian, and widely thought that al Qaeda received funding from inside the kingdom, but the pages may reveal a deeper Saudi role. In a recent 60 Minutesdocumentary, CBS reporter Steve Kroft asked Graham if, by “Saudis,” he meant the government, rich individuals, or charities, to which he replied, “All of the above.”

The 28 pages deal mainly with two of the attackers, Nawaf al-Hazmi and Khalid al-Mihdhar, both Saudis, who reached the US in early 2000 and went on to hijack American Flight 77 that crashed into the Pentagon. According to the 9/11 Commission report, they arrived in Los Angeles in January 2000 and soon attended the King Fahd mosque, where an allegedly extremist imam and Saudi consular official named Fahad al-Thumairy was based (in 2003 al-Thumairy was barred from the US on suspicion of links to terrorism). A bit later in their stay the duo went to a restaurant on Venice Boulevard for lunch, where they encountered another Saudi, Omar al-Bayoumi, who helped them move to San Diego. Al-Bayoumi had phone contact with al-Thumairy, 60 Minutes reported, and had visited the consulate where the imam worked just before meeting the two hijackers. As if that wasn’t suspicious enough, he was also “a ghost employee with a no-show job at a Saudi aviation contractor outside Los Angeles while drawing a paycheck from the Saudi government,” according to the CBS show. Bob Graham told 60 Minutes that Bayoumi was a Saudi intelligence officer, a view reportedly backed up by the 28 pages.

Perhaps this is all coincidence, and these Saudis were simply trying to help their compatriots and fellow Muslims. The Saudi government has denied any involvement in the 9/11 plot and called for the 28 pages to be released. A redacted CIA Inspector General report from 2005 found “no evidence that the Saudi Government knowingly and willingly supported al Qaeda terrorists”. The 9/11 Commission also appeared to exonerate the kingdom, finding “no evidence that the Saudi government as an institution or senior Saudi officials individually” funded al Qaeda. Earlier this year the chair and vice-chair of the Commission, Thomas Kean and Lee Hamilton, issued an op-ed urging caution about the 28 pages, saying they contained “raw, unvetted material” and offered no “smoking gun,” a view supported by Philip Zelikow, the Commission’s former executive director. But others disagree. Former 9/11 Commission member John Lehman toldThe Guardian that “there was an awful lot of participation by Saudi individuals in supporting the hijackers” and that “our report should never have been read as an exoneration of Saudi Arabia.” Lehman’s former colleagues on the Commission, Tim Roemer and Bob Kerrey, also believe the 28 pages should be released. Kerrey told 60 Minutes that the Commission “certainly didn’t pursue the entire line of inquiry in regard to Saudi Arabia.”

While it might be tempting to blame the Saudis for 9/11, the attacks partly resulted from failures in the US national security apparatus, as official reports have shown. According to the 2005 CIA Inspector General report and otherevidence, the Agency knew in January 2000 that al-Mihdhar, a suspected terrorist, had a multiple-entry US visa, but did not notify the FBI or other agencies of this fact. Later that month the two Saudis traveled to an al Qaeda meeting in Kuala Lumpur, which the CIA placed under surveillance. The pair left and flew on to Bangkok, where the Agency lost track of them. Then, in March 2000, the CIA learned that al-Hazmi had entered the US, but, again, this data was not shared. The Inspector General found that “some 50 to 60 individuals” at the Agency were exposed to “travel information” regarding al-Mihdhar and al-Hazmi, but even then no one told the State Department and other government entities so the pair could be watchlisted. It was only in “late August 2001”, according to the report, eighteen months after the men had arrived in southern California, that they were finally placed on a watchlist. But that is not all. According to Ali Soufan, a former FBI agent who was investigating the bombing of the USS Cole in October 2000, he asked the CIA for details about a possible meeting of al Qaeda operatives in south-east Asia three times from 2000 to 2001, but the Agency gave him nothing.

Maybe this was all a mistake and the CIA just dropped the ball. But some think the Agency withheld information deliberately. Richard Clarke, the top White House counter-terrorism official at the time, claims (though admits that he cannot prove) that the CIA and Saudis were trying to recruit al-Mihdhar and al-Hazmi as sources inside the US, and did not tell the FBI because it is illegal for the CIA to operate extensively on domestic soil. In a recent discussion at Fordham Law School that partly addressed the 28 pages, Clarke said, “I believe—and I can’t prove this—that the CIA in conjunction with Saudi intelligence contacted al-Mihdhar and al-Hazmi when they were in southern California and tried to flip them into CIA sources.” Clarke has made these claims before in an interview with filmmakers Ray Nowosielski and John Duffy. It is “inexplicable,” he told them, that when he had “every other detail about everything related to terrorism,” he was never shown this information. Intelligence reports were “automatically” forwarded to him at the White House, and it would have taken the CIA Director, George Tenet, to stop normal distribution in this case. The CIA never relayed these details during their daily meetings at the White House, he said, and never told him or anyone on his staff “in a period of over twelve months”. So, why not? “There is only one conceivable reason” Clarke can come up with: the Agency was trying to conceal an unlawful domestic operation. The CIA was keen to get al Qaeda sources, Clarke told Nowosielski and Duffy, and the arrival of the two men in Los Angeles provided them with a perfect opportunity. He suspects the Saudi government was involved, too: Bayoumi, a possible Saudi intelligence officer, might have been the hijackers’ “handler” in the US, Clarke added.

These incendiary comments, coming from a senior former White House official, caused quite a stirwhen first made public in 2011, even prompting an unusual joint statement from Tenet and two other CIA officers, Cofer Black and Richard Blee, denying the allegations. While Clarke’s views are, by his own admission, speculative, they are still more plausible than conspiracy theories that members of the US government actively facilitated the 9/11 attacks by planting explosives in the World Trade Center and so on. Indeed, his point is that the CIA was trying (albeit improperly) to infiltrate and undermine the al Qaeda organization, not enable it.

And some other former US government officials appear to share his suspicions, including Mark Rossini, who worked as an FBI special agent on assignment to CIA before and after 9/11. According to Newsweek, Rossini and his colleague, Doug Miller, wanted to share the information about al-Mihdhar’s US visa with the FBI in early 2000, but personnel in the CIA’s Bin Laden unit intervened to stop them.Rossini has spoken to the two filmmakers who interviewed Clarke, too (Nowosielski pointed me to atranscript of their documentary), and his account is backed up by another FBI agent and also by the 9/11 Commission report. The CIA insisted that it had shared the visa information with the FBI, but the 9/11 report found no evidence to back that up. Philip Zelikow told Newsweek the Commission didn’t know why the CIA had suppressed the data.

Rossini agrees with Clarke that the CIA was trying to recruit the hijackers. “They ran a clandestine op in the US, and they didn’t want the Bureau involved in it,” he told Newsweek. A former CIA officer, also speaking to Newsweek, said he found the recruitment narrative credible, adding that any attempt to flip the hijackers would probably have gone through Saudi intelligence (Bayoumi?). And Lawrence Wright, in his Pulitzer Prize-winning book on al Qaeda, The Looming Tower (p.353), reported that FBI agents suspected the CIA “hoped to recruit” the two men in a “joint venture with Saudi intelligence” (this theory was again mentioned in a 2016 New Yorker documentary by Alex Gibney). Colonel Lawrence Wilkerson, former chief of staff to Secretary of State Colin Powell, told me that he and several former colleagues from the Bush administration also believed the CIA withheld information about the two Saudis because it was trying to flip them inside the US.

Admittedly other sectors of the American government failed prior to 9/11. The NSA passed over important call data, and the FBI missedopportunities to disrupt the plot, while the White House did not prioritize counter-terrorism as it should have. Indeed, the CIA was probably more attuned to the al Qaeda threat than any other agency, making its repeated failure to share intelligence especially puzzling. Maybe the 28 pages will provide some illumination.