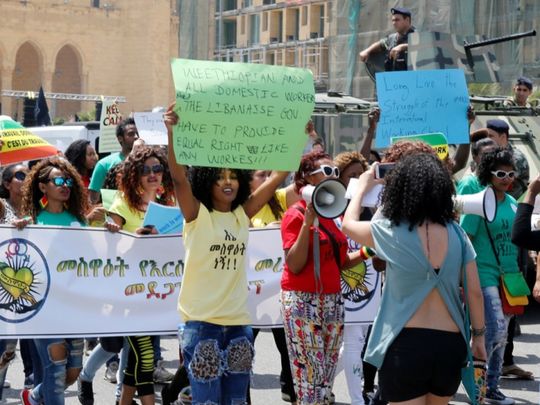 Migrant domestic workers take on their bosses in Lebanon

Rosie Maya Limbu came to Lebanon from Nepalwhen she was 19 years old. Like the many who made the same journey before her, she came in search of work and a better life. But she found something else.

“My [employer] was afraid to let me go out. For four and a half years I was inside the house. I had no day off, nothing,” she says. “If she wanted to go to the church, or to her daughter’s house, for a short time in the car I can see the outside world. Otherwise, always inside the house with one old lady.”

Maya Limbu’s experience is a familiar one to the thousands of migrant workers who travel to Lebanon to work as live-in house cleaners or carers for the elderly. Exploitation and abuse are rampant, thanks in part to an absence of legal protection that leaves migrant workers without any means to pursue grievances against their employer.

After years of seeking help from the authorities and getting nowhere, migrant workers are now taking it upon themselves to fight for change. They even have a union — the first of its kind in the Middle East.

There are around 250,000 migrant domestic workers in Lebanon, most of whom were recruited by agencies that specialize in hiring from abroad. They are almost all women, from Ethiopia, the Philippines, Nepal and Sri Lanka, among others.

The true scale of abuse is unknown, since many are too scared to come forward. Many have no days off and work all hours. A 2008 Human Rights Watch report said that migrant domestic workers in Lebanon were dying of unnatural causes at a rate of one per week. Most of the deaths were attributed to suicide — many of the victims falling from buildings while apparently trying to escape their employers.

On May 1, International Workers’ Day, hundreds of migrant domestic workers marched calling for better treatment. Evette, a domestic worker from Cameroon who did not want to give her full name, summed up the mood: “I’m marching today because we need our liberty. We are tired of suffering in Lebanon and we need our freedom, we need our passports with us. So that is why we are protesting today. We want the Lebanese to know we are human beings. We are people’s children. They should stop treating us like animals.”

One of the major causes of abuse is a sponsorship, or kafala, system that governs migrant domestic workers. Upon arrival in the country, they are required to hand over their passport to their employers. From that moment on, they lose control of their lives.

“This system entails that the woman, the worker, is usually tied to one employer. The name of the employer that is on her residency permit and work permit. Which means that the worker is under total subordination of the employer,” says Nay el-Rahi, who works for a women’s rights group called KAFA (“Enough”).

“The employer usually controls all the aspects of the life of this worker. From her arrival to Lebanon, to her livelihood, to how many hours she works, to her actual leaving the country.”

When the workers try to report abuse to the police, they are often turned away or returned to their employers, according to Rami Shukr, a volunteer at a migrant community center in Beirut.

“We hear of at least four cases of abuse every week. Which is a very big number. But we are sure there is a much bigger number going on that we haven’t been hearing about,” Shukr says. “When you don’t have any monitoring and anybody going to these workplaces or going to the house and checking, the employers can do whatever they want.”

Even when the cases make it to court, things rarely go the way of the worker. In 2010, Human Rights Watch reviewed 114 Lebanese judicial rulings involving migrant domestic workers. In all of those cases, Human Rights Watch “found no case where the authorities prosecuted employers for locking workers inside their homes, confiscating passports, denying food, or overwork — even though there were at least nine cases in the sample where the [migrant domestic worker] complained to the police or investigative judge of such an abuse.”

Shukr adds that the community center where he works sees around four cases of abuse every week. With limited resources, they can only help so many.

Fed up, the migrant workers formed a union last year. Supported by the National Federation of Workers’ Unions in Lebanon, they’re campaigning to be officially recognized by the government, and for a new labor law that covers migrant domestic workers.

The union provides language classes, computer lessons, and a place where they can come for support when things go wrong. Having that lifeline is an important step in preventing abuse.

When Maya Limbu was stuck inside her house for four and a half years, she was too afraid to seek help.

“At that time, I had fear inside. If I go outside, this is not my country. If there is nobody, maybe I get lost. I was very young. I didn’t get courage to do such kind of things,” she says.

“It was not me only. Most of the caregivers, most of the nannies and domestic workers, they are like that,” she adds. “Until now, now we have a union and we raise our voice.”

She was saved from her situation by other migrant workers. They approached her boss and convinced her that Maya Limbu should be allowed a day off, and to go outside. Now, Maya Limbu is looking to do the same. She is a board member of the union, responsible primarily for other migrant domestic workers from Nepal. She uses her days off to attend union meetings.

“It’s very important for all the workers,” she says of the union. “All the workers need freedom, good salary, and they have their social life. They came here not only to work. They want to learn something. They will grow their knowledge and develop themselves, otherwise they will go as a maid and go back. They have no knowledge. So we want this kind of changes.”