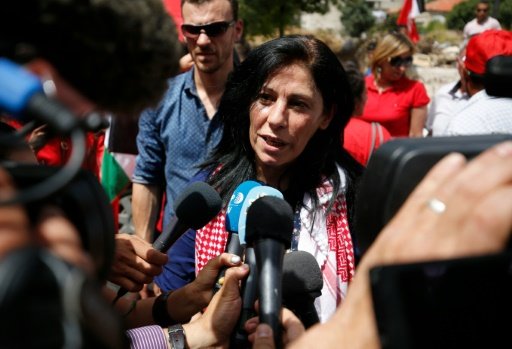 A prominent Palestinian lawmaker vowed to keep up her campaign for prisoners’ rights after being released Friday following 14 months in an Israeli jail, AFP journalists at the scene said.

Prominent Palestinian lawmaker Khalida Jarrar speaks to reporters in her hometown, the West Bank city of Ramallah, following her release from an Israeli jail on June 3, 2016

Leftwinger Khalida Jarrar, 53, was arrested in April 2015 and later sentenced to 15 months in prison for encouraging attacks against Israelis, according to the Israeli army.

She was released a month early due to overcrowding in Israeli jails, according to the prisons’ administration.

“There are still many prisoners, more than 7,000 — including judges, parliamentarians, children and the sick,” Jarrar told reporters at her home in Ramallah, seat of the Palestinian Authority in the occupied West Bank.

A handcuffed Jarrar had been brought by Israel Prison Service officers to the Jabara checkpoint between Israel and the West Bank, where she was freed and walked a few metres (yards) on foot.

She was greeted by Ayman Odeh, the head of the Arab Joint List in the Israeli parliament, and dozens of supporters.

Jarrar is a senior figure in the Popular Front for the Liberation of Palestine, a Marxist party considered a terrorist organisation by Israel.

Many of its leaders are in custody and Jarrar has been jailed multiple times.

Despite her release, Jarrar still has a five-year suspended sentence, according to Palestinian rights organisation Addameer.

Her husband Ghassan Jarrar, himself a leftist jailed multiple times, told AFP he was only able to see his wife during the hearings of her trial in an Israeli military court.

“It was very hard for her,” he said, adding proudly that she “set up a school in prison and five girls were able to pass their exams through it.”

Jarrar is a member of the Palestinian parliament which has not met since 2007 after elections a year earlier were won by the Islamist movement Hamas.

Six members of that parliament are still held by Israel, according to the Palestinian Prisoners’ Club.