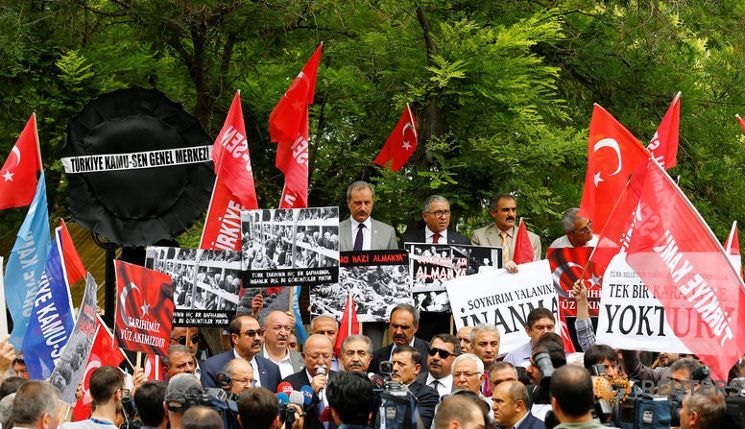 Turkish outrage over Germany’s decision to label the 1915 massacre of Armenians as an act of genocide was swift, but like the symbolic Bundestag vote itself, Ankara’s reaction is likely to be more for show than anything else.

German lawmakers on Thursday (June 2) overwhelmingly endorsed the resolution, prompting Turkey to recall its ambassador and summon a senior German diplomat to the foreign ministry. Newspapers across the political spectrum were united in their anger, with both the pro-government Star and the opposition Sozcu depicting German Chancellor Angela Merkel as Adolf Hitler.

The Armenian massacre is a touchy subject for Ankara, which is sensitive to outside criticism. Turkey rejects the view that the killings of Christian Armenians during World War One amounted to a genocide.

It is also home to more than 3 million Turks. Those ties – as well as talks with the EU to end the migrant crisis and give Turks visa-free travel to Europe – are unlikely to be permanently damaged.

“Our reaction to Germany will be limited to a political reaction,” a senior AK Party official told Reuters. “We do not think it will reach the level of economic sanctions… We don’t want to say ‘We will punish Germany’ and then go and punish our citizens who live there.”

“Nobody should expect German-Turkish relations to be completely spoiled, but no one should expect us to be unresponsive,” he told reporters before departing for an official visit to Azerbaijan.

The nature and scale of the killings remain highly contentious. Turkey accepts that many Armenians died in partisan fighting beginning in 1915, but denies that up to 1.5 million were killed and that this constituted an act of genocide, a term used by many Western historians and foreign parliaments.

President Tayyip Erdogan has previously described the killings as “inhumane” and has expressed condolences.

“Turkey and Germany have close relations in everything, including the economy and politics,” said commentator Cengiz Aktar. “The most sensitive issue is the visa and migrants deal, but I don’t see this resolution having an impact on it.”

Never one to shirk from voicing outrage, Erdogan said on Thursday the vote would “seriously impact” relations. Yet, tellingly, he has not yet given any details.

This time, Turkey’s language is markedly more reserved than in 2012, when it threatened a “total rupture” with France over a law outlawing denial of the genocide. France’s highest legal authority ruled that was an unconstitutional violation of freedom of speech, prompting a thaw in relations.

Even the withdrawal of Turkey’s ambassador was tempered by the fact he was due to leave Germany this summer.

“We are looking past what Erdogan says and focussing on what he actually does. He may not be especially determined to join the EU but he clearly wants to use the EU-Turkey deal to get certain things like visa liberalisation. We believe he has a strong interest in this deal,” said one senior German official.

Merkel is relying on the success of an EU-Turkey deal she has championed to stem the flow of migrants to Europe in return for cash, visa-free travel for Turks to Europe and accelerated talks on EU membership.

At home, critics accuse her of going soft on Ankara over human rights because her desire to stop the flow of migrants. In April, she drew fire for allowing German prosecutors to look into charges against a comedian who mocked Erdogan in a crude poem.

Merkel herself did not take part in the vote, citing public engagements. Turkish officials said they recognised that domestic German politics a played a role in the resolution.

Initiated by the opposition Greens, the motion was almost unanimously endorsed – although the chamber itself was not full and the top three people in government, Merkel, Vice Chancellor Sigmar Gabriel and Foreign Minister Frank-Walter Steinmeier were all absent.

“This resolution was taken in response to Germany’s domestic political dynamics. They did not embrace it that closely. The turnout was low,” the senior AKP official said.

“We take that into account when giving our reaction.”