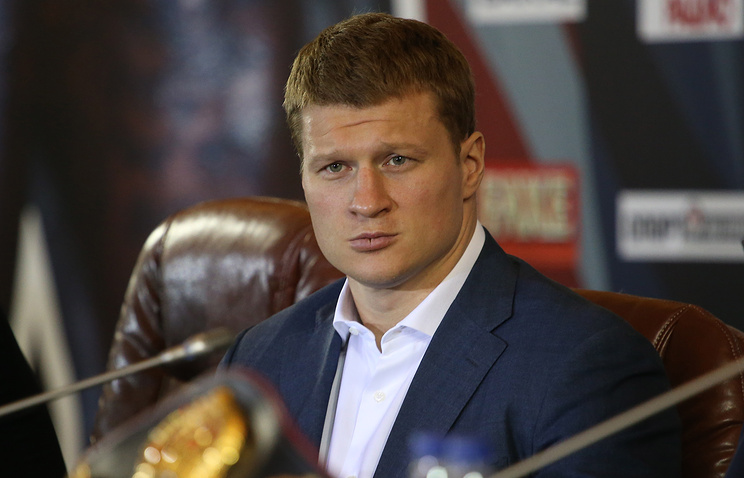 Russian boxer Povetkin’s participation in 2016 Olympics out of question

Russian heavyweight boxer Alexander Povetkin did not plan and will not be fighting at the 2016 Summer Olympic Games in Brazil’s Rio de Janeiro this summer, Andrei Ryabinsky, the head of the Boxing World promotion company told TASS on Thursday (june 2).

The International Boxing Association (AIBA) announced on Wednesday that professional boxers were allowed to take part in the Rio Olympics. Following the announcement, Russian boxing team’s Head Coach Alexander Lebzyak said he could use the help of Povetkin and cruiseweighter Denis Lebedev. The latter said he might travel to the Games if it helped his boxing career.

“Alexander’s participation at the Olympics is absolutely out of the question,” Ryabinsky said in an interview with TASS. “We have other aims and tasks.”

Povetkin is currently under an investigation of the World Boxing Council (WBC) on doping abuse accusations.

WBC Heavyweight Champion Deontay Wilder of the United States (W36-L0, 35 KOs) was scheduled to hold his mandatory title bout against Povetkin (30-1, 22 KOs) on May 21 in Moscow, However, Russian boxer’s doping Sample A had tested positive for meldonium shortly before the fight and the bout was suspended indefinitely. His Sample B also tested positive for the same substance.

Sample A revealed that the body system of the 36-year-old Russian fighter contained a low concentration of 0.07 micrograms. US sports channel ESPN later reported that before the positive doping result, Povetkin passed doping tests three times, namely on April, 7,8 and 11, and all his samples tested negative. However, his doping test as of April 27 gave a positive indication for meldonium presence in his blood.

On Tuesday, Ryabinsky announced that Povetkin’s doping sample, collected on May 17, tested negative for meldonium.

However, on April 13, WADA announced that the concentration of less than one microgram of meldonium in the body system of an athlete, whose doping tests were conducted before March 1, was acceptable.