Home » Manchet 1 » All about the “Strategic” Varshavyanka-class Submarine launched in St. Petersburg 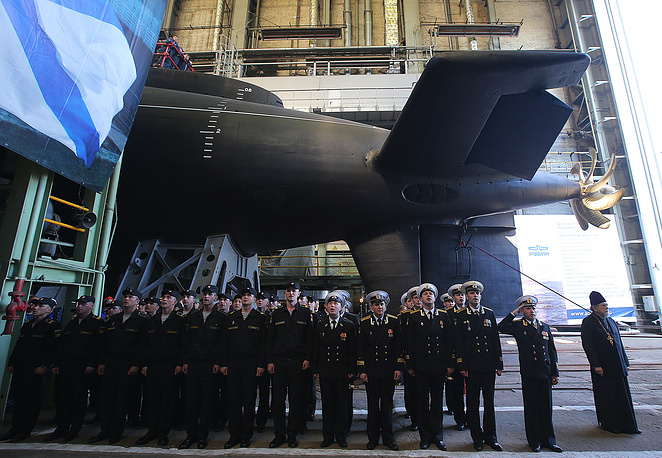 All about the “Strategic” Varshavyanka-class Submarine launched in St. Petersburg

Russia launched today the sixth Varshavyanka-class diesel-electric submarine of Project 636.3 Kolpino, intended for the Russian Black Sea Fleet, at the Admiralty Shipyard (Admiralty Wharves) in St. Petersburg. What is the importance of the submarine? why is it “strategic? and what will it change in the Russian- US military race?

Submarines were first used in the first world war, and their importance was clearly visible in the second world war, especially with the emergence of the “U-Boat”, which is the anglicised version of the German word U-Boot, a shortening of Unterseeboot, literally “undersea boat”.

Germany was mostly known for making the best submarines. Back then, they drove the fears of US and the UK for over 3 years.

Nowadays, submarines have become more versatile; very hard to detect. They have many uses, and could even face and destroy air crafts and fleets.

At the launch of the Varshavyanka-class diesel-electric submarine today, Deputy Commander of the Russian Navy Vice Admiral Alexander Fedotenkov said “It’s a big day for the Navy, for St. Petersburg, for the country. The submarine launch is a national event. Admiralty Shipyard is indeed the flagship of the national shipbuilding industry. Your ships are delivered on time and with proper quality”.

Head of the Rubin Central Design Bureau for Marine Engineering Igor Vilnit for his part wished the crew of the submarine successful service and said that the designers will do their best to maintain the good quality of submarines of Project 636.3.

The Kolpino submarine will be the final in a series of six non-nuclear submarines that are currently being built for the Russian Navy.
Subs for the Northern and Baltic fleets

The Admiralty Wharves Shipyard in St. Petersburg in northwest Russia will build a series of six Project 636.3 Varshavyanka-class diesel-electric submarines for the Pacific Fleet, Shipyard CEO Alexander Buzakov said today. He added that “The decision by the command has been taken and the submarines will be built at the Admiralty Wharves shipyard. We expect that the entire series will be built at our shipyard.”

In turn, President of the United Shipbuilding Corporation Alexei Rakhmanov said the Admiralty Wharves Shipyard would be the main builder of the submarines for the Pacific Fleet.

‘We’ll see by the results of the year whether it will be possible to make a decision on the construction [a part of the defense contract] at the Amur Shipyard,” he said.

According to the president of the United Shipbuilding Corporation, the contract for building submarines for the Pacific Fleet will be signed in the imminent future.

As was reported earlier, a defense contract for the construction of six submarines of this project for the Pacific Fleet may be divided between the Amur Shipyard in the Russian Far East and the Admiralty Wharves in St. Petersburg.

Submarines of Project 636.3, also known as Varshavyanka, were developed by the Rubin Central Design Bureau.

Russian News Agency TASS mentioned that “there are already four submarines of this project in the Russian Navy’s (Black Sea Fleet) combat strength. The lead submarine – the Novorossiysk, was delivered to the Russian Navy in August 2014. The second submarine in the series – the Rostov-on-Don – was delivered on December 30, 2014. In late 2015, it launched the Kalibr cruise missiles to destroy facilities of the Islamic State terrorist organization (outlawed in Russia) from a position in the Mediterranean Sea”.

The news agency added that “the third submarine – the Stary Oskol – has been serving in the Russian Navy since July 2015. The Krasnodar submarine – the fourth in the series, was handed over to the Navy on November 5, 2015. The fifth Varshavyanka-class submarine for the Black Sea Fleet, dubbed the Veliky Novgorod, was launched on March 18. The fifth and sixth submarines are planned to be delivered to the Black Sea Fleet this year”.

Type 636 submarines are designed for anti-submarine warfare (ASW) and anti-surface-ship warfare (ASuW) and also for general reconnaissance and patrol missions. The Type 636 submarine is considered to be to be one of the quietest diesel submarines in the world. It is said to be capable of detecting an enemy submarine at a range three to four times greater than it can be detected itself.

Why are submarines considered a “strategic” weapon in the Russian-US military race? Submarines, which could be used for special operations, are also a geopolitical weapon.

In the Russian-US military race, Russia does not dominate the US in fleets, or any other military weapon, but it does in Submarines. The US fleet is able to destroy 80% of the world’s fleets, geopolitical experts say.

According to an article in the Joint Force Quarterly 81, which is published by the National Defense University, by T.X. Hammes, “Undersea weapons will provide a much greater challenge to navies. There is clearly a movement by middle powers in Asia to establish effective submarine forces. However, a submarine force is expensive, complex, and difficult to operate”.

The following are Military Statistics between Russia and the United States