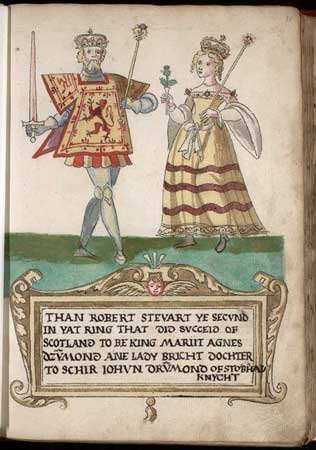 A DNA sample provided by a businessman has confirmed him as a descendant of a medieval king of Scotland.

It has also led to the discovery of a distinct genetic marker for descendants of King Robert III.

DNA tests undertaken as part of a study led by the University of Strathclyde, proved that Archie Shaw Stewart is in the family line of King Robert III, who reigned from 1390 until his death in 1406.

Stewart is directly descended from one of the king’s sons, Sir John Stewart of Blackhall & Ardgowan. Sir John’s great-grandfather Walter Stewart, was one of the commanders for King Robert I – also known as Robert the Bruce – at the Battle of Bannockburn in 1314 and went on to marry his daughter.

Stewart was confirmed as a descendant and was also found to be a carrier of a distinct genetic marker which has not been found in descendants of Robert III’s brothers. This is particularly significant as it means that anyone who carries this marker is also descended from Robert III.

The findings have been made as part of the Bannockburn Family History Project, which explores genetic connections between people living today and their ancestors who fought in the Battle. It is run by the Genealogical Studies Postgraduate Program at Strathclyde’s Centre for Lifelong Learning.

Graham Holton, Principal Tutor with the programme, said, “This is a fascinating discovery of a distinct marker for descendants of Robert III.

“The marker is not found in descendants of the king’s brothers, showing that a mutation in the DNA occurred in either Robert III himself or one of his descendants. It is not yet known in which generation this took place but we are delighted to have been able to confirm Archie Shaw Stewart’s place in medieval royal lineage, and acknowledge his contribution to furthering research into the branches of the Stewarts.”

Stewart, who runs Scottish electronics company Pan Controls, said, “This is wonderful to be able to discriminate with a high level of confidence between some branches of families by the ability to trace genetic mutations.”

“My great uncle, Patrick Shaw Stewart, produced an extensive family tree over 100 years ago, extending back to Robert III. He would be very satisfied to see this part of it – Stewart – verified by new technology,” Stewart said.

Donald Stewart, a retired mechanical engineering draughtsman from Lanark, who also carries the marker, said, “I turned to DNA testing when my genealogy research ran out of documentation and I hit a brick wall. My brick wall was John Stewart, tenant farmer on the Duke of Argyll’s estate at High Park, Kintyre, from 1710. This discovery, without doubt, confirms tradition and links my High Park family to King Robert III. It has been so worthwhile.”

The initial identification of the genetic marker was made by an analyst of genetic data, Alex Williamson.

Initial findings from the Project were shown at the Battle of Bannockburn Family History Project Exhibition, held at the Bannockburn Visitor Centre in 2014.