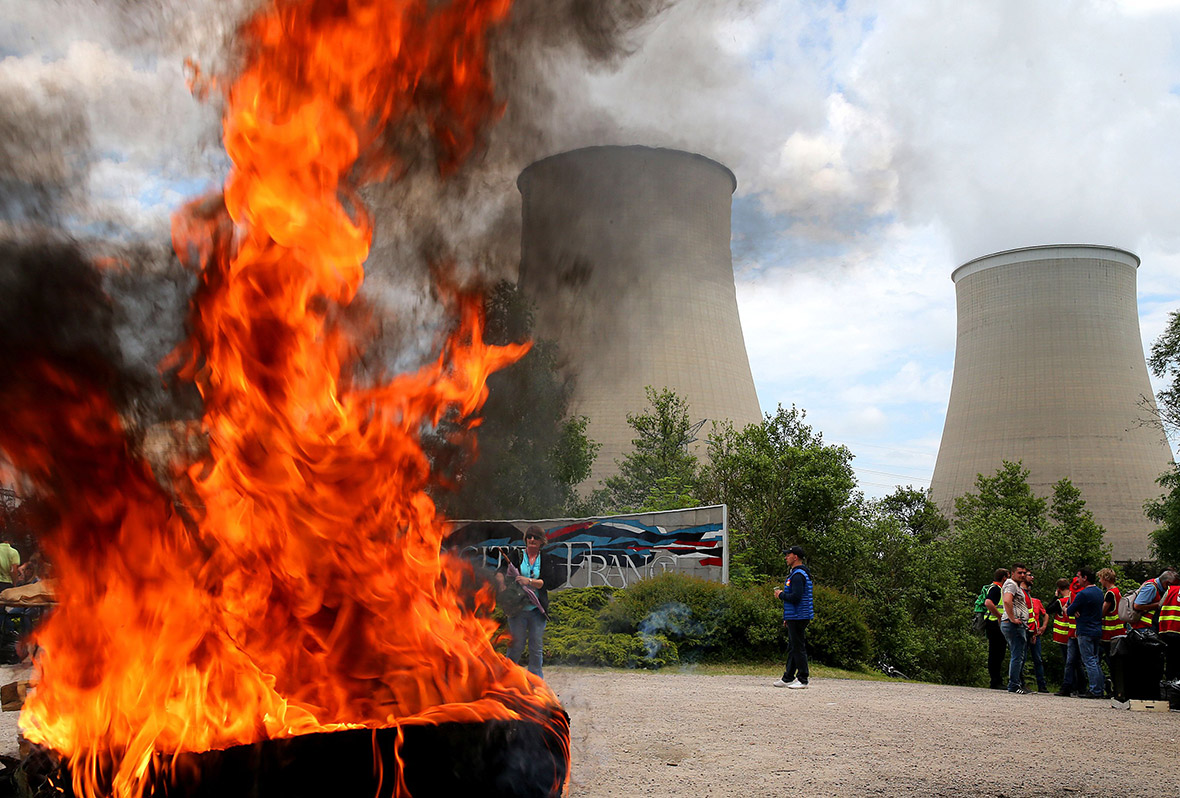 The French government fought back on Friday (May 27) in a bitter labour dispute with unions, sweeping away blockades at fuel depots after President Francois Hollande vowed to “stand firm” over the reform that sparked the industrial action.

A defiant Hollande said he would not give in to the unions’ demands to withdraw the measures that the Socialist government hope will free up France’s famously rigid labour market.

“I will stand firm because I think it is a good reform,” the president told reporters at a G7 summit in Japan.

Authorities stepped up their offensive early in the morning, when riot police swept away a blockade of burning tyres at an oil depot near a Total refinery in Donges, western France.

Workers on strike set up a burning barricade to block access to the harbour of Saint-Nazaire, western France

Police cleared all 15 blockades around the country, leaving only one depot still shut by a strike. “Unblocking these depots will allow an increase in delivery capacity to resupply more and more petrol stations,” a transport ministry spokesman said.

Six of France’s eight oil refineries were also still either closed or operating at reduced capacity due to ongoing union action.

The stoppages are part of a wave of strikes and mass demonstrations that have seriously disrupted France, just as it gears up to host the Euro 2016 football championships in two weeks’ time.

France’s civil aviation body appealed to airlines to fuel up abroad before arriving in Paris from European destinations to ensure they could make the return flight.

Air France said the measure was precautionary. “There is no shortage at this stage,” the airline said.

Strikes also continued at nuclear power stations – which provide three-quarters of the country’s electricity – but have so far failed to affect supply, authorities said.

The employers’ federation, Medef, expressed growing anger over the effect the strikes are having on France’s fragile economic growth.

Medef chief Pierre Gattaz condemned the “thugs’ methods” of the unions and urged the government to “resist their blackmail”.

Tourist bookings were also being hit and hoteliers fear Euro 2016 visitors will be put off by the industrial action.

“A strike of this size a few weeks before Euro 2016 and right in the middle of the tourist season is completely unacceptable,” the GNI hotel industry federation said in a statement.

Small business owners were feeling the pinch too.

“It’s not good for business. I support helping people but not people who do nothing,” said Guillaume Bouvelot, 51, who owns a snack bar in an affluent district of Paris where customers were thin on the ground.

But all the main unions were in no mood to back down against Hollande’s deeply unpopular government, urging workers to “multiply and support” the strikes.

They criticised the government’s “stubbornness” in refusing to withdraw the contested law, saying it was only “boosting the determination” of protesters.

Hollande responded that dialogue was “always possible”, but not if the government was threatened with “an ultimatum”.

The mounting problems for the government come a year ahead of an election in which Hollande is considering standing again despite poll ratings that are among the lowest for a French leader in modern history.

The CGT union that has led the protests has called for rolling strikes on the Paris Metro network to start on June 10, the day of the opening match of Euro 2016, giving the organisers new headaches on top of security concerns sparked by last November’s militant attacks in Paris.

Tens of thousands of activists staged a demonstration in Paris on Thursday that descended into violence.

Riot police used tear gas after masked youths smashed windows and damaged cars in the latest outburst of anger over the controversial legislation.

Many organisations, including the International Monetary Fund, have said the labour reforms are necessary to create jobs in a country where around 10 percent of the workforce are idle.

But the CGT is furious that the government forced the legislation through parliament without a vote and is demanding it be scrapped altogether.

Unions argue the reforms favour business at the expense of workers’ rights and are unlikely to bring down high unemployment.

Prime Minister Manuel Valls, fighting for his political survival, has insisted the legislation will not be withdrawn, but says it might still be possible to make “changes” or “improvements”.