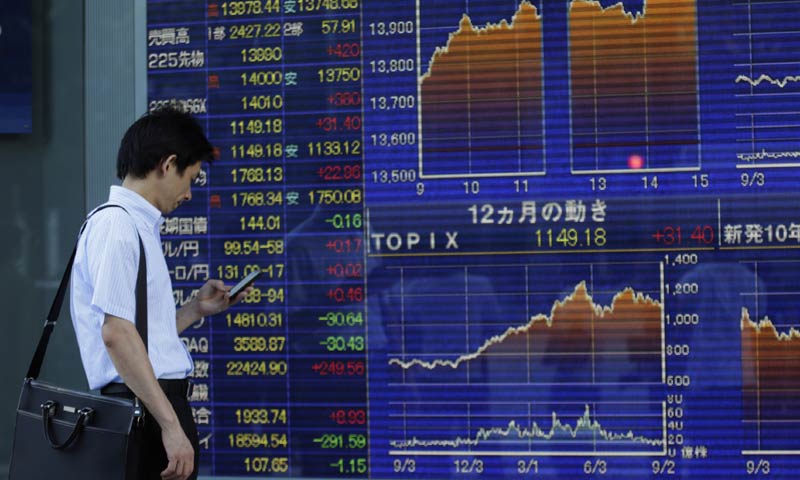 Asian shares rise, but Japan down on weak data

Asian shares rose on Monday after a solid session on Wall Street, while the dollar moved away from recent highs though remained supported as investors bet that the U.S. Federal Reserve was on track to raise rates sooner rather than later.

Asian shares rose on Monday after a solid session on Wall Street, while the dollar moved away from recent highs though remained supported as investors bet that the U.S. Federal Reserve was on track to raise rates sooner rather than later.

Data released before the open showed Japan’s exports tumbled 10.1 percent in April from a year earlier, in line with expectations but down for a seventh straight month, reflecting sluggish demand from China and emerging markets. Imports fell sharply, which in turn boosted the country’s trade surplus above expectations.

Investors expect the Bank of Japan to muster further stimulus steps, perhaps as early as this summer.

By contrast, markets have started to entertain the prospect of a near term U.S. rate hike after last week’s release of Fed meeting minutes showed that policymakers weren’t shying away from raising interest rates as early as next month.

The probability for a June rate hike rose from around 4 percent at the start of the week to 30 percent on Friday, according to CME Group’s FedWatch site. Futures markets are predicting two rate increases this year as opposed to just one as recently as last week.

Federal Reserve Chair Janet Yellen will appear at a panel event hosted by Harvard University on Friday. Fed branch presidents including those from San Francisco, St. Louis, Dallas, Minneapolis are also slated to speak earlier in the week.

“Fed futures price a full hike through December now, but the risk premium out the curve in the 2 year-5 year sector is still low,” wrote Andrew Sheets, chief cross-asset strategist at Morgan Stanley.

“Yellen’s two speeches on May 27 and June 6 ahead of the June FOMC become critical in shaping that risk premium. A reiteration of the hawkish minutes will likely lead to front-end steepening and push USD higher,” he said.

On the U.S. data front, home resales rose more than expected in April, suggesting the economy continues to gather pace during the second quarter.

The dollar index, which tracks the greenback against a basket of six rival currencies, edged down 0.1 percent to 95.224 after gaining 0.8 percent last week. It stood within sight of Thursday’s high of 95.520, its strongest since March 29.

The yen gained as Japanese equities slipped. The dollar was down about 0.4 percent at 109.80 yen , but was still not far from its three-week peak of 110.59 yen scaled on Friday.

Against this backdrop, the United States issued a fresh warning to Japan against intervening in currency markets at the weekend Group of 7 financial leaders’ meeting in Japan.

Crude oil futures dropped as investors locked in profits after they logged a second week of gains, despite posting losses for the day on Friday.

Spot gold edged up 0.2 percent to US$1,254.60 per ounce, getting a reprieve from the weaker dollar after declining for three days in a row and notching nearly three-week lows. Gold skidded 1.7 percent last week, marking its biggest weekly decline in two months.