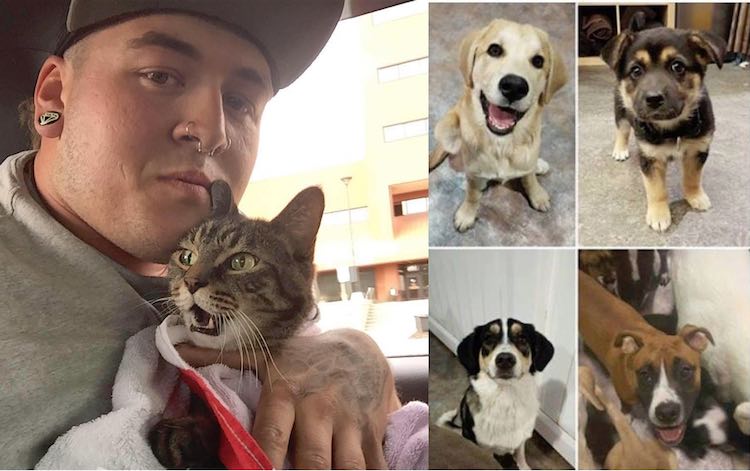 Last week, a massive fire hit the town of Fort McMurray in Canada. The pace of the natural disaster was so rapid, some citizens weren’t even able to return to their homes to collect valuable possessions or their pets.  Understandably, the forced evacuation was incredibly emotional and upsetting. While some families grieved about their left-behind pets, one group of activists decided to (illegally) do something about it.

CBCNews relays that a group of Canadian truck hobbyists kicked their compassion into high-gear by slipping through barriers to rescue as many animals as they could before police forced them out of the area.

Reportedly, the members of the Western Canadian Powerstrokes – who describe themselves as “truck enthusiasts who do charity work” made the impromptu decision to slip behind police lines when they heard that dozens of pets were left behind.

“It was a spur of the moment thing. And we just decided not to sit around anymore. We said ‘Let’s go save some pets…’ We went rogue.”

The group entered the evacuated city as volunteers to refuel trucks and equipment used to fight the fire. But when they were told to wait because it was too dangerous to fight along the fires, they slipped past the police lines and began entering homes to find forgotten pets.

The men broke down the doors in an apartment building as smoke alarms screamed non-stop. Inside, they rescued about a half-dozen animals that had been trapped for two days. In the photo above, Colquhoun-Rivard poses with the first rescue, a cat named Zion.

Five dogs and three cats belonging to Trina Holloway were also picked up. At one point, they called the caretaker so her voice could coax one of the frightened dogs out from hiding.

PETS RESCUED. Hope we can get them back to their owners.

It wasn’t long before the police shut down their animal search-and-rescue operation. The rescued pets, however, were put on a plane to Edmonton to be reunited with their families.

The activists’ efforts have inspired dozens of other animal rescue groups to form. All across Alberta, volunteers are loading up trucks and trailers and racing to the scene of fires to help forgotten stray pets. Their ultimate goal is to reunite them with their families.

Social media is playing an important role in reuniting furry critters with their caretakers.

Those who are unable to venture to Fort McMurray are sending donations to help. Reportedly, the Humane Society in Edmonton has been flooded with pet food donations. They are bundling it up for shipment to evacuation centers around the fire zone.

In addition, a website has been set up to report the locations of pets that need to be rescued, as well as document the animals which have been recovered so far. Most of the requests are for dogs and cats, but more exotic species are cropping up. One man, for example, reported 32 geckos that need rescuing.