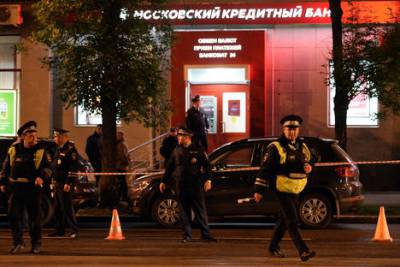 At approximately 8:37 pm Moscow time, a masked man came into a branch of Moscow Credit Bank on Pervomayskaya Street in Moscow, TASS reported. He was in possession of an object that appeared to be a handgun, and took hostages. He also claimed to have a bomb.

The man has been subsequently indentified as Alexei Ukhin, 29. It is believed he had been having financial problems.

Ukhin demanded 4.7 million Rubles and 13,000 Euros from bank employees, and threatened to detonate the bomb if his demand was not met.

Police managed to secure the release of 5 people, one woman was still being held by the perpetrator when he threatened to detonate the bomb. Neighboring apartments were evacuated due to the bomb threat.
At that point, a SWAT team stormed the bank and eliminated Mr. Ukhin. There were no other casualties.
It was later found that the claimed explosive device was fake.
The incident is minor sensation in Moscow. Bank robbery is not exactly a frequent occurence in Russia. Maybe because of how effectively Russians “negotiate” with armed robbers.
Bruce Willis would be proud.
Source: russia-insider.com