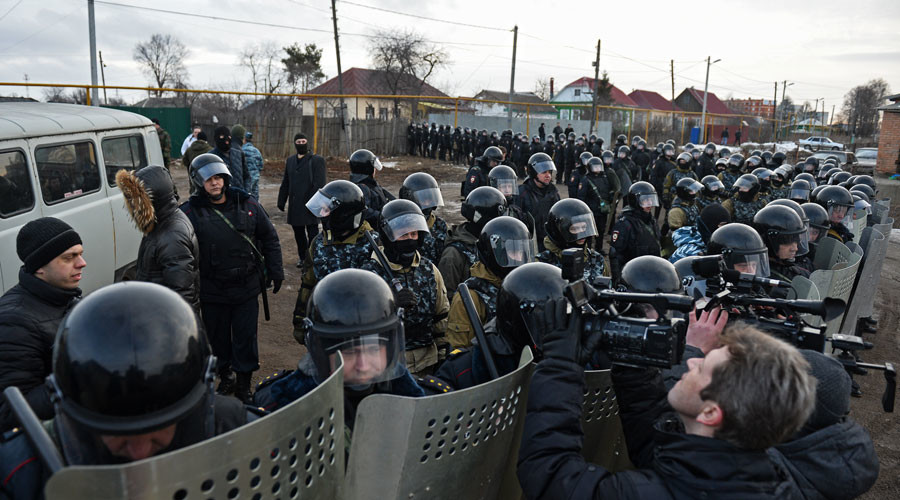 The State Duma has passed in the first reading a bill on the foundation of a National Guard – an agency based on Interior Ministry troops, but with broader powers than its predecessor and reporting directly to the president.

In a vote, 345 parliamentarians were for the bill, while 14 voted against the motion. There were no abstentions but the Communist Party caucus refused to participate in the voting as a mark of protest.

At the parliamentary debates, the Communists said they understood the necessity of security reforms, especially those that would help the fight against terrorism and reduce corruption, but said they thought the National Guard plan under current consideration was full of flaws.

In particular, MP Vyacheslav Tetekhin told fellow lawmakers that assigning all combat units to a separate structure, such as the National Guard, would critically weaken the Interior Ministry. He also said that allowing the new agency to license private security firms was wrong, as this had nothing to do with countering terrorism and extremism.

The Communists also expressed fears that the National Guard could be used by authorities to quell popular protests that, in the Communists’ view, could soon start in connection with the difficult economic situation in the country.

The head of the populist nationalist party LDPR, Vladimir Zhirinovsky, also said that in his view “suppressing an internal mutiny” was one of the key tasks of the National Guard, but added that this was the exact reason why he and his caucus had decided to support the bill.

Zhirinovsky then praised the special services and said that if a bill on the National Guard had been passed under Soviet President Mikhail Gorbachev, modern Russia could have avoided many problems and crises.

The head of the lower house Committee for Security, MP Irina Yarovaya (United Russia), criticized the Communists for “excessive politicizing” of the issue and “attaching negative nuances to the important work done by people in uniform.” She also said that the reform was intended to optimize the existing financial resources and staff potential of Russian law enforcers.

President Putin ordered the creation of the National Guard on April 5 this year. Putin said that the new force will operate under the auspices of the Interior Ministry and will fight against terrorism and organized crime, continuing to perform duties currently carried out by crowd-control units and crack teams.

In subsequent comments, presidential press secretary Dmitry Peskov said that the National Guard would not perform field investigation activities, but would be involved in fighting terrorism within the country. He also promised that the new force would not require any additional staffing.When the bill on the formation of the National Guard was published in mid-April, it appeared that the new force would be able to take part in international operations including peacekeeping missions. Current Russian laws do not permit sending Interior Ministry forces on such missions.