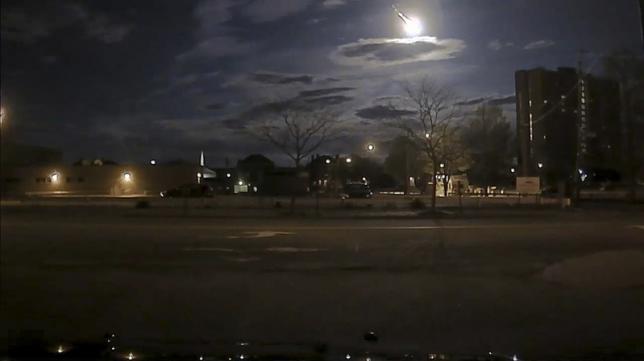 A meteor lit up the night sky over New England and eastern Canada early on Tuesday, startling people who saw it including police officers who captured the show on a dashcam.

A bright light streaked across the sky shortly after 12:50 a.m. ET (0450 GMT) over states extending from Pennsylvania to Maine, according to the American Meteor Society. It was also captured on some security cameras.

About 100 tons of dust and sand-sized particles known as meteorites enter the Earth’s atmosphere each day, though most are too small to be noticed, according to the National Aeronautics and Space Administration.

The Portland, Maine, police department posted a video showing the meteor as videotaped by the dashboard camera of a patrol car. One of the officers could be heard exclaiming, “Oh, my God!”

The airport in Burlington, Vermont, captured the show on a security camera.

NASA estimates that a meteor about the size of a car enters the Earth’s atmosphere on average once a year, producing an impressive fireball that burns up before reaching the ground.