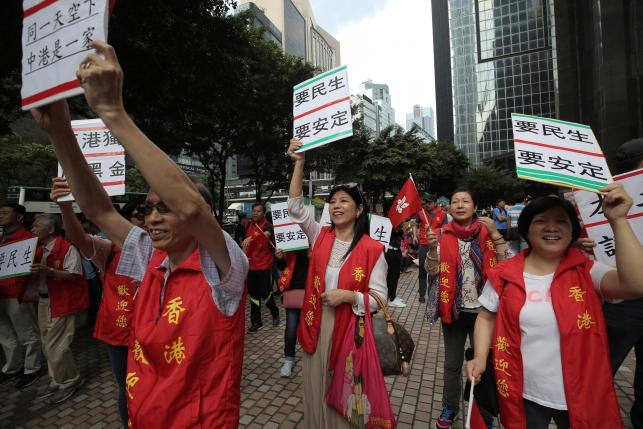 Thousands of police were deployed across Hong Kong on Wednesday as a top-ranked Beijing official addressed an economic summit, with tensions high amid calls for greater autonomy in the Chinese-ruled city or even independence from the mainland.

Zhang Dejiang arrived on Tuesday for a rare visit in the former British colony and pledged to listen to residents’ concerns about the city’s relationship with China, an issue that has ignited fierce debate in the Asian financial center.

Plainclothes and uniformed police were on alert close to parts of the city that were crippled by pro-democracy protests in late 2014. Those protests presented Beijing with one of its greatest political challenges in decades.

On Wednesday, protesters chanted for Hong Kong leader Leung Chun-ying to step down, while others held up a black banner calling for an end to dictatorial rule and to “stop interfering with Hong Kong affairs”.

One small group of protesters burned a portrait of Zhang, China’s number three leader, and chanted: “Zhang Dejiang get the hell out of Hong Kong.”

They also demanded the release of all political prisoners and true universal suffrage for Hong Kong.

Others waved yellow umbrellas, a symbol of the so-called Occupy demonstrations in 2014 when protesters used them during clashes with police who fired teargas.

Democracy activists and pro-Beijing groups traded insults close to the conference center where Zhang was speaking, heckling and swearing at each other. One pro-Beijing group held up a blue banner that said: “Oppose splitting up Hong Kong.”

Hong Kong guarantees freedom of expression under the agreement that saw Britain return its former colony to Beijing in 1997, but authorities haven’t ruled out taking action against pro-independence activists.

Zhang is the first senior Chinese leader to visit Hong Kong in years. He spoke at a conference on Beijing’s “One Belt, One Road” initiative, a plan for a new Silk Road and economic belt spreading from Western China to Central Asia and Europe.

Hong Kong media reports said up to 6,000 police officers would be deployed for Zhang’s three-day visit.

The official China Daily said in an editorial that Zhang’s visit comes at a “crucial” time to underscore China’s support and commitment to maintaining Hong Kong’s stability and prosperity.

Zhang, however, as the head of China’s parliament and Beijing’s point person on Hong Kong affairs, has faced hostility from some of the city’s pro-democracy activists and radicals who have staged disruptive protests to call for greater Hong Kong nationalism and even independence from China.