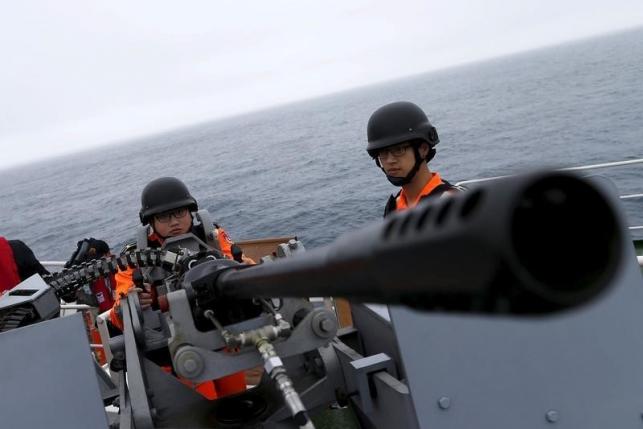 China’s Defense Ministry said recent military drills on its southeastern coast were annual exercises, after Chinese media had suggested they could have been timed ahead of Taiwan’s inauguration of a new president from a pro-independence party.

China and self-ruled Taiwan underwent a rapprochement under the outgoing government which was run by China-friendly Nationalists. But ties have strained with the independence-leaning Democratic Progressive Party (DPP) and Tsai Ing-wen, who is set to be sworn in as president on Friday.

Chinese state media have reported that the People’s Liberation Army (PLA) has carried out at least three landing exercises on the country’s southeast coast since the beginning of May.

The largest drill was conducted in recent days by a regiment under the PLA’s 31st Group Army, which is based in coastal Fujian province, across the strait from Taiwan, the official China Daily newspaper said on Wednesday.

“These drills are routine arrangements conducted according to annual training plans,” the ministry said in a short statement on its website.

“They do not target any specific objective. Relevant individuals should not over-interpret [them],” the ministry said.

The ministry made a similar statement after state-media broadcast footage of live-fire military and landing drills just days after the landslide Taiwan election win in January by Tsai and the DPP.

Chinese state media have made no mention of Taiwan in the reports on the exercises, though some Chinese domestic media have hinted that the timing might be coordinated ahead of Tsai’s inauguration to deter pro-independence moves.

Taiwan’s defense ministry said the recent footage in Chinese-state media of the drills involved annual PLA exercises and that it had “a grasp” of the situation, but declined to further comment.

The United States has expressed concerns about the danger of worsening China-Taiwan ties, at a time when China’s navy is increasingly flexing its muscles in the South China and East China Seas and expanding territorial claims.

Taiwan’s military has warned that China has practiced attacks on targets modeled on places in Taiwan. Taiwan also estimates China aims hundreds of missiles at the island.