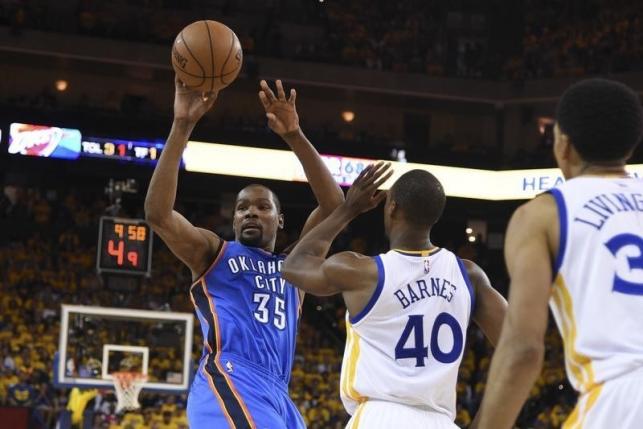 (The Sports Xchange) – Oklahoma center Steven Adams converted an errant pass by team mate Russell Westbrook into two critical free throws with 1:01 left on Monday to short-circuit a Golden State rally and help the Thunder to a 108-102 Game 1 victory in the Western Conference finals.

Westbrook overcame a slow start to score a game-high 27 points. Kevin Durant added 26, including a lead-extending jumper with 30.7 seconds left, as the Thunder stole home-court advantage from the top-seeded Warriors.

Game 2 is scheduled for Wednesday in Oakland, where the Warriors absorbed their first loss of the postseason on Monday.

Adams’ free throws came after the Warriors rallied within 101-100 on an interior hoop by Harrison Barnes with 2:02 to go.

After an exchange of possessions, Thunder power forward Serge Ibaka recovered a missed jumper by Durant, giving Oklahoma City a second crack with 1:12 to play.

Westbrook then drove toward the hoop and lobbed a pass that smacked hard off the backboard and deflected toward the free-throw line, where Adams retrieved it and took off for the hoop.

He was fouled on a shot attempt, and he made both free throws to increase Oklahoma City’s lead to 103-100.

The Thunder were able to win despite relatively poor shooting by Durant (10-for-30) and Westbrook (7-for-21).

Each contributed in other areas, with Durant grabbing 10 rebounds and Westbrook dishing off 12 assists.

Adams played a key role in the win, recording a 16-point, 12-rebound double-double. Ibaka also had a double-double with 11 points and 11 rebounds.

Warriors star Stephen Curry had 26 points to go with team-highs in rebounds (10) and assists (seven).

He hit six of his 14 3-point attempts, but the Warriors struggled from beyond the arc, shooting just 11-for-30 and outscoring the Thunder (8-for-17) by just nine despite taking 13 more attempts.

Klay Thompson had 25 points and Draymond Green 23 for the Warriors, who lost just twice at home during the regular season.

The Thunder had not led since 10-9 midway through the first quarter before Durant buried a 3-pointer and Westbrook a driving hoop in the first 90 seconds of the final period, pushing Oklahoma City into a 90-88 advantage.

The lead grew to as much as 101-93 with 4:42 to play as the Thunder defense took control of the game, limiting Golden State to just two field goals in the first 7 1/2 minutes of the fourth quarter.

A 3-pointer by Curry, the Warriors’ first of the fourth quarter after seven consecutive misses, ended the Golden State drought and got the Warriors within 101-96 with 4:28 to go.

Green and Barnes converted interior hoops as a desperation Golden State surge continued, closing the gap to 101-100 with 2:02 to go.

However, Green then failed to convert on a drive to the hoop, and Adams came up with his key play for the Thunder, allowing Oklahoma City to finish off the upset victory.

The Thunder trailed by 13 at halftime and 66-52 in the third minute of the third quarter before riding a Westbrook surge to within 88-85 by period’s end.

Westbrook had missed nine of his first 10 shots before pouring in five of seven, including a pair of 3-pointers, over the final 7:02 of the third quarter.

After a three-point first half, Westbrook had 19 in the third quarter, almost singlehandedly shooting the Thunder back into the game.

The Warriors got an unexpected boost from Barnes early on to take a lead they extended to 13-point advantage by halftime.

The teams played to an 11-all tie before Barnes’ first of two first-quarter 3-pointers capped a 9-2 run that propelled Golden State into a 20-13 lead.

The margin reached 13 on two occasions in the second quarter, including 1.5 seconds before the halftime horn when Curry buried his second 3-pointer of the night.

Curry’s first 3-pointer, which came earlier in the period, extended his streak of making at least one to 45 straight playoff games, breaking Reggie Miller’s record of 44.

Thompson led all scorers in the half with 19. Westbrook, meanwhile, had only three points on 1-for-8 shooting.