Home » Press » A US Coup in Brazil: Lula, Dilma, & the Brazilian crisis 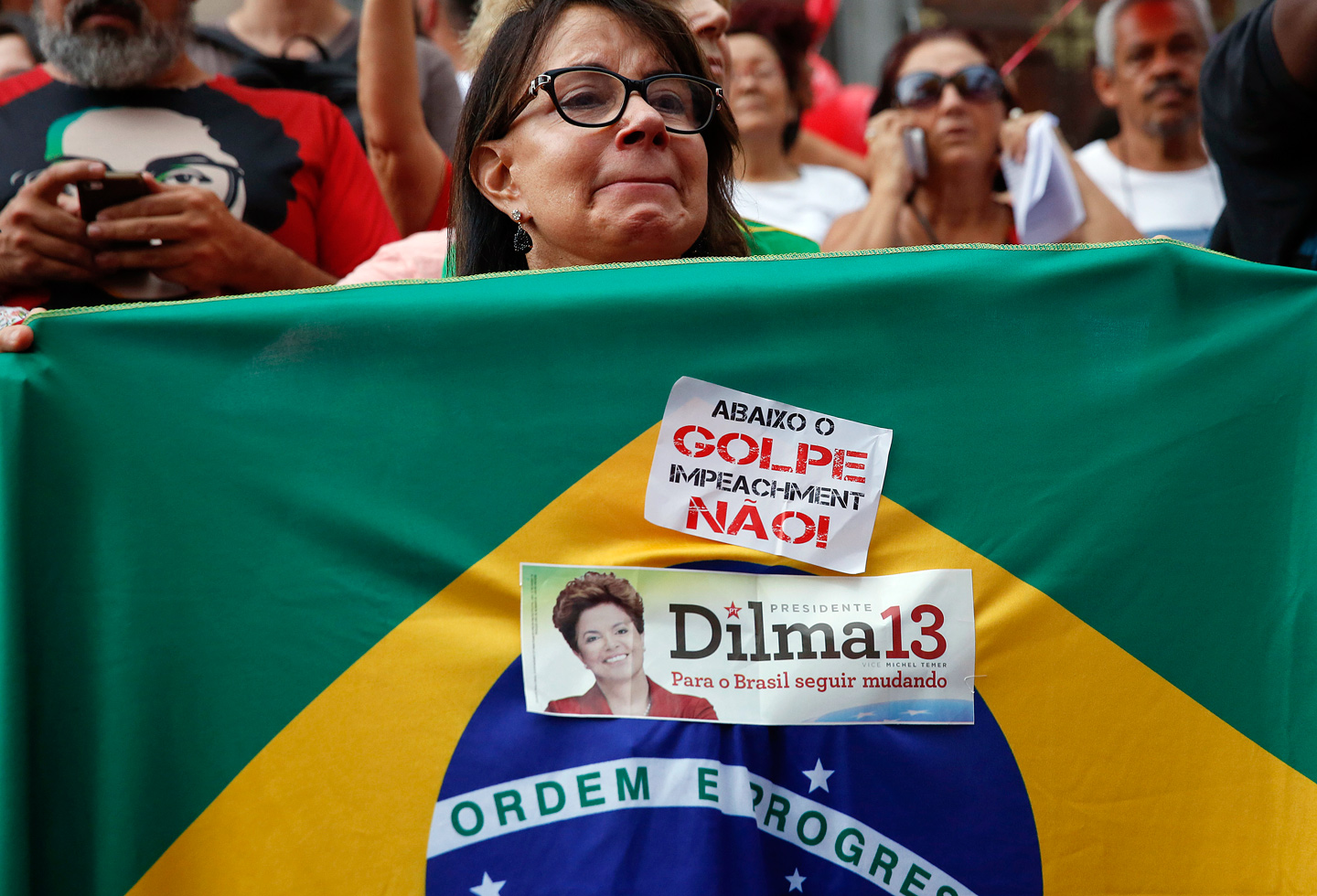 A US Coup in Brazil: Lula, Dilma, & the Brazilian crisis

So much has happened in Brazil the last 4 weeks or so that it is getting hard to keep up with all the facts and their meaning. We advise readers to see Part 1 first (linked above). Some commenters have joked that the American TV series House of Cards pales in comparison to contemporary Brazilian political scene. As of now, Lula has gone from “almost arrested” to “almost Minister” (see below), and President Dilma Roussef’s impeachment has being voted for in the lower house – so now the next step in deciding her fate shall be determined by the senate in May, 2016 (it is very much likely she will be impeached, though no one can be sure). Meanwhile, her conspiring vice-president could be impeached also.

Let us continue then with a brief summary of the latest facts and semi-facts, so to speak:

Before we proceed, I ask the reader to allow me to go back to a few more facts:

We could go on, but we hope the reader gets the picture by now. Sadly, the anti-corruption cry involving the impeachment proceedings and public demonstrations is somewhat of a travesty. If it is not technically a classic coup d’état, then it is a (parliamentary) “coup” of some sort; an “almost coup”, if you will. Amongst the law-makers loudly demanding Rousseff’s impeachment are the worst Brazilian corrupt politicians, including infamous Paulo Maluf, who was on Interpol “wanted” Red notice list – thus subject to arrest and extradition in 181 countries – and on World Bank’s “Grand Corruption Cases Database Project”.

Large sectors of the middle class are incensed by Dilma and PT, expressing this through the discourse of anti-communist rhetoric. Which is rather ironic in itself, for PT  is actually supported by the catholic bishops of Brazil (many of whom have denounced the “coup”) and its administration could be better described as “national-developmentalist” and “center-left”. Lula and PT’s primary social welfare program (“Bolsa Familia”) ‒ the centerpiece of PT’s social policy – was based on some of neoliberal economist Milton Friedman’s ideas (his “negative income tax”).

This whole atmosphere of farce is intensified by what seems to be a nation in a trance in the context of la société du spectacle (Guy Debord). Sometimes literally in a trance, as Janaina Paschoal (the lawyer who is one of the authors of the impeachment request) gave a very eloquent anti-government speech in the University of Sao Paulo Law School apparently under a trance – the press described her as “possessed” (Ms. Paschoal is a member of Brazilian spiritualist cult of Umbanda.

The natural power of media to turn things into a show seems to be heightened in Brazil, whose society and popular culture has been described by many Brazilian intellectuals and social scientists as having a strong tendency towards carnivalization (in a bakhtinian sense) – see protest image bellow.

President Dilma Rousseff is basically being impeached because members of her PT party on the ethics committee announced they would vote to remove the powerful lower house speaker Eduardo Cunha from Congress, due to his many misdeeds. Mr. Cunha impeachment bid is thus an open act of revenge against PT and the president in a open conspiracy with Ms. Rousseff’s own vice-president Mr. Temer. Both Mr. Temer and Mr. Cunha need to seize power, so that they can somehow abort the federal police in Operation Car Wash, as both risk facing prison. It is a conspiracy of corrupt and experienced politicians against a weak and somewhat unfit president – this move counts with popular support due to the bad shape of the economy (basically due to the Brazil-China commodities bubble) and Dilma Rousseff’s notorious lack of charisma.

The plan is to impeach Dilma Rousseff under vague fiscal irresponsibility charges (a technicality) and to get former president Lula arrested for equally vague charges (see part 1), thus providing the media and society with a good enough scapegoat, in an almost Frazerian ritual manner. There are no saints in this story. Rousseff’s pedaladas (creative budget accounting) are commonplace in Brazil (16 Brazilian governors could be impeached for very similar reasons. See http://www.valor.com.br/politica/4493408/se-impeachment-por-pedaladas-16-governadores-terao-que-se-afastar ). The Petrobras bribes scandal started under previous administrations, years ago. A leaked list of Odebrecht donations under investigation cites over 200 politicians from 24 parties (Brazil’s congress has 27 political parties). Rather than being made an example of (to reform the political system), Dilma Rousseff and Lula da Silva are actually being scapegoated as part of a major cover-up operation.

The opposition plan also involves a political reform that would bring European style parliamentarism to Brazil, avoiding a Michel Temer defeat in a 2018 Presidential race – being the most powerful party and political machine in Brazil, PMDB (the party of both Cunha and Temer) would reign supreme in a parliamentary republic. Such political reform is being sold to the general public as a panacea that would end political crises and corruption.

Besides that, Mr. Cunha, Mr. Temer and his colleagues are supported by pro-American forces in Brazilian society, such as already mentioned pro-American senator José Serra, Koch brothers-funded MBL movement etc. Mr. Cunha himself is strongly pro-Israel (he is a member of a very pro-Israel evangelical church) and is very unhappy with current Brazilian foreign policy (see http://www1.folha.uol.com.br/poder/2015/06/1637401-em-jerusalem-cunha-e-recebido-com-honras-no-parlamento-israelense.shtml ). One should keep in mind then president Lula’s role in avoiding an US-Iran war (seehttp://news.bbc.co.uk/2/hi/middle_east/8686728.stm and alsohttp://calhoun.nps.edu/handle/10945/44572 , page 82-3).

The Brazilian “coup” therefore signals a possible turn in Brazilian foreign policy from one towards multipolarity to one aligned with the US interventionist policy (regarding the Middle East and elsewhere) – the very anti-Russian hawkish policy that the American general public rejects (as seen in the rising popularity of isolationist Donald Trump) and that American dissidents such as conservative Paul Buchanan and Libertarian Ron Paul denounce.

It is a coup against BRICS and against a multipolar world.