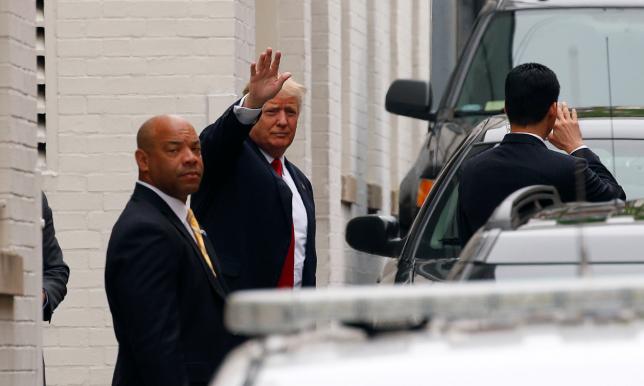 Trump on best behavior as he woos Republicans but differences remain

U.S. Republican presidential candidate Donald Trump went on a charm offensive on Thursday to try to win the party establishment’s support for his insurgent candidacy, but top Republican Paul Ryan stopped short of endorsing him.

Trump was on his best behavior on a day of meetings with Republican lawmakers on Capitol Hill. He listened patiently as they raised concerns about his tone and the need to try to appeal to Hispanic voters.

He avoided strident language, like the frequent criticism he has lobbed from the campaign trail that many lawmakers are awestruck by the corridors of power and forget why they were sent to Washington.

“The whole discussion was very solid, reasonable and a warm and winning discussion,” said Senator Orrin Hatch of Utah. “I think you’re going to find he’s going to be better and better all the time.”

The U.S. budget deficit and debt were among the issues Trump and Ryan discussed, sources familiar with the meeting said.

Trump’s day in Washington was aimed at laying to rest some of the concerns that persist among Republicans about his incendiary tone and some policy proposals at odds with party doctrine.

The New York billionaire, who needs the party behind him to bolster his chances at winning the Nov. 8 election, has vowed to build a wall along the U.S. border with Mexico, deport 11 million illegal immigrants, temporarily ban Muslims from entering the country and impose trade protectionist policies.

Trump held an hour-long session with Ryan, who as speaker of the House of Representatives is the top U.S. elected Republican and can hold sway with many establishment Republicans leery of Trump.

“This was our first meeting, but it was a very positive step toward unification,” Ryan and Trump said in a joint statement.

Trump told Fox News in an interview that he had a “very, very good meeting” with Ryan. “I think Paul felt the same way and everybody else did also,” Trump said.

Trump said he and Ryan largely agree on issues of border security, trade and beefing up the U.S. military.

Party leaders are normally eager to rally around a presidential nominee to combine forces for the battle leading up to the general election. But Ryan has withheld his endorsement of Trump out of concern over the businessman’s conservative credentials.

In remarks to reporters after the meeting, the congressman said he was encouraged by the session but that more work will be needed.

“There’s no secret that Donald Trump and I have had our differences. We talked about those differences today,” Ryan said at his weekly news conference. “I do believe we are planting the seeds in getting ourselves unified.”

Ryan, who may harbor aspirations of running for president in 2020 or later, noted that he represents a wing of the conservatives and that it is positive that Trump is bringing new voters into the party.

Despite his problems in winning over senior Republicans, Trump received a boost on Wednesday when a Reuters/Ipsos national poll showed him pulling even with likely Democratic nominee Hillary Clinton. The online survey found 41 percent of likely voters supporting Clinton and 40 percent backing Trump.

Later on Thursday, Trump went into a meeting with Senate Republican leaders, where he posed for photos with them and heard concerns about his campaign rhetoric but appeared to make some progress in tempering concerns about him.

“Everyone here wants you to win,” Senate Majority Leader Mitch McConnell told him at the Senate session, a source said.

Senator Shelly Moore Capito of West Virginia urged Trump to be careful in his tone. Senator Rob Portman of Ohio, a former U.S. trade representative, urged caution on his rhetoric against trade deals.

“The issue of tone did come up,” said Senator John Cornyn of Texas, who said he gave some advice to Trump on “the importance of the Hispanic vote and the whole idea of distinguishing between illegal immigration and legal immigration.”

In a meeting at a Washington law firm, Trump sat down with James Baker, who served as secretary of state for Republican President George H.W. Bush.

Earlier in the day, Baker had testified to the Senate Foreign Relations Committee. Under questioning from Senator Marco Rubio, a former Republican presidential candidate, Baker said the world “would be far less stable” without a strong NATO, a slap at Trump’s idea of reconfiguring the Western alliance and getting European nations to foot more of the bill.

“Secretary Baker had a meeting with Donald Trump that was requested by his campaign,” a Baker spokesman said.

Even Senator Lindsey Graham of South Carolina softened a bit. Graham dropped out of the presidential race earlier this year and had said the choice between Trump and rival Ted Cruz was like trying to decide between being “shot or poisoned.”

Graham said he had a “cordial, pleasant conversation” on the phone with Trump on Wednesday.

“I know Mr. Trump is reaching out to many people, throughout the party and the country, to solicit their advice and opinions. I believe this is a wise move on his part,” said Graham.