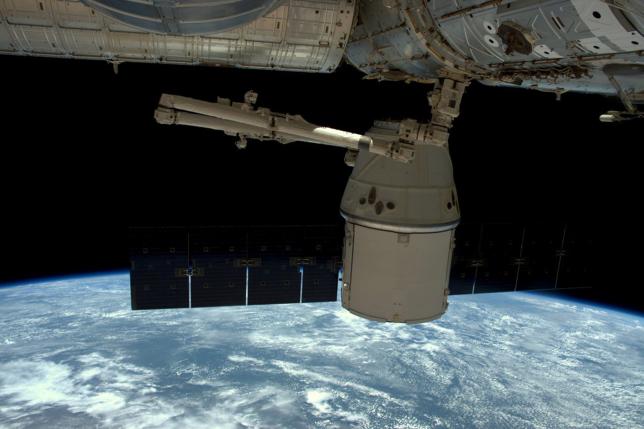 A SpaceX Dragon capsule splashed down in the Pacific Ocean on Wednesday carrying about 3,700 pounds (1,680 kg) of experiment results and cargo from the International Space Station, NASA said.

It was the first return load from the station in a year, following a SpaceX launch accident in June 2015 that destroyed another unmanned Dragon capsule.

The company’s Dragon capsules are currently the only ships that can return cargo from the station, a $100 billion research laboratory that flies about 250 miles (400 km) above Earth.

Ground controllers at NASA’s Johnson Space Center in Houston earlier on Wednesday used the station’s robot arm to pluck the unmanned capsule from its berthing port and position it for release into space.

British astronaut Timothy Peake, working from inside the space station’s cupola module, then commanded the crane to free its grip at 9:19 a.m. EDT/1319 GMT as the station sailed over Australia so Dragon could begin its ride back to Earth.

“Dragon spacecraft has served us well. It’s good to see it departing full of science, and we wish it a safe recovery back on planet Earth,” Peake radioed to Mission Control in Houston.

Also aboard Dragon is the upper torso and life-support system of the faulty spacesuit NASA astronaut Tim Kopra wore during a January spacewalk. The spacewalk was cut short when water began leaking into his helmet.

NASA has had problems with leaking spacesuits before, including the near-drowning of Italian astronaut Luca Parmitano during a July 2013 outing.

NASA plans to resume spacewalks after the next Dragon capsule arrives early this summer. The spaceship will carry a new docking system so that future crewed versions of Dragon, as well as Boeing’s (BA.N) CST-100 Starliner, can park at the station.

Both capsules, developed in public-private partnerships with NASA, are scheduled for test flights next year.