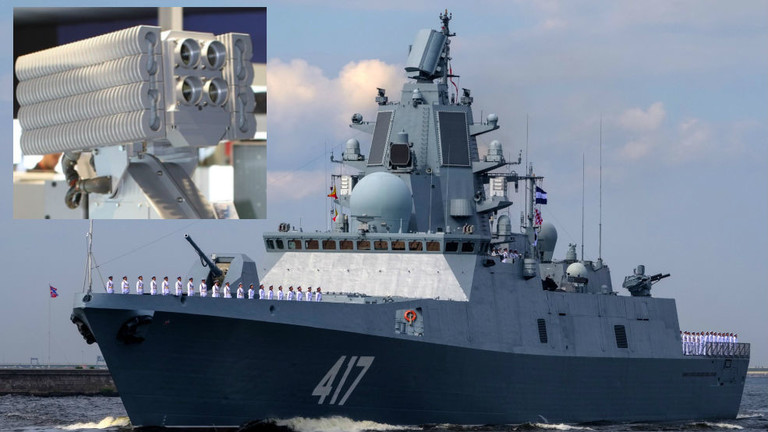 A new weapon installed on Russian warships can make enemy soldiers miss targets by blinding them, while also causing hallucinations and making them want to vomit.

Two Russian frigates were fitted with the new non-lethal dazzler-type weapon, the 5P-42 Filin (eagle-owl), the manufacturer’s representative told RIA Novosti. The weapon is designed to temporarily blind the enemy.

It creates a strobe-like effect that disrupts eyesight, seriously hampering the soldier’s ability to aim at night, Ruselectronics (which produces the weapon) stated.

During testing, volunteers used assault rifles, sniper rifles, and machine guns to shoot targets placed up to 2km away and protected by the device. They all had trouble aiming because they “couldn’t see the target.”

Forty-five percent of the volunteers reported feeling dizzy, nauseous, and disoriented. Twenty percent are said to have experienced hallucinations, described as “a ball of light moving in front of [our] eyes.”The company didn’t specify how many people participated in the tests.

Filin is also capable of “effectively suppressing” night vision tech, laser distance sensors, and even pointing systems for anti-tank missiles from a range of up to 5km, according to the manufacturer.

The ships equipped with the new high-tech stations are the state-of-the-art frigates Admiral Gorshkov and Admiral Kasatonov, both of Russia’s Northern Sea Fleet. Each has two stations. Two more frigates, currently under construction, are also expected to be fitted with the device.

The company first unveiled the blinding weapon in December as a tool for law enforcement. The design team said that it can be used during raids against terrorists and other criminals.