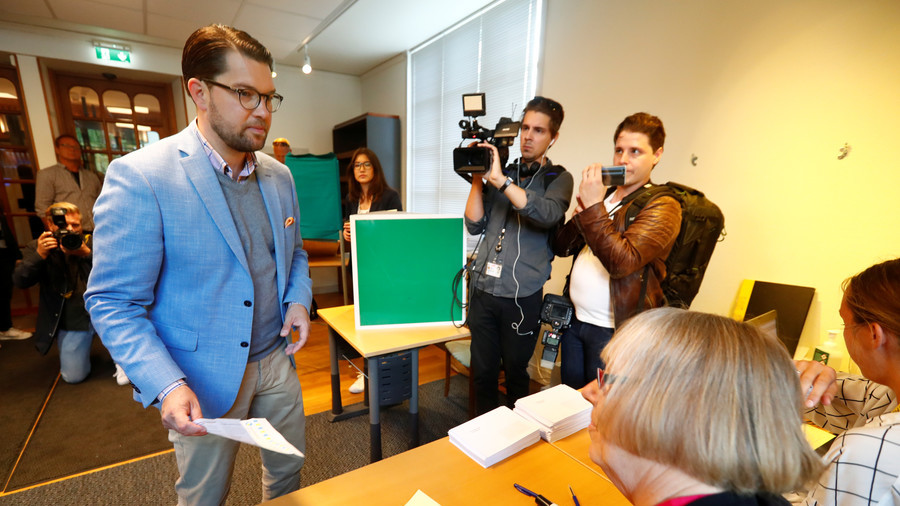 The Social Democrats achieved their worst result in a century, while the Sweden Democrats will have their biggest-ever faction in parliament following Sunday’s election, according to results, with 99 percent of the votes tallied.

The center-left Social Democrats are in first place with 28.4 percent – 3 less than in 2014, the center-right Moderates follow them in second place with 19.8 – down 4 – and the anti-immigrant Sweden Democrats are close behind with 17.6 percent. The party first made the Riksdag in 2010, and has boosted its vote by 5 percent in the last four years.

“We will gain huge influence over what happens in Sweden during the coming weeks, months and years,” Jimmie Akesson told the media, calling his party “the real winner” of the election.

A detailed breakdown commissioned by national broadcaster SVT on the basis of exit polls showed that while just over half of the Sweden Democrats supporters had voted for the party four years ago, the second biggest faction, nearly one-in-five, were defectors from the Social Democrats, a party that spent the campaign explicitly labeling the upstarts “Nazis” and “racists.” Sweden Democrats leader Jimmie Akesson’s nationalist and anti-immigrant rhetoric also appears to have played well with former supporters of the Moderates, the party that appears to be squeezed uncomfortably between the socialist left, and a more outspoken right.

The SVT survey said that a record 41 percent of the electorate changed their party allegiance from the previous election, as voters move away from the established centrist parties. This is a trend that has been replicated throughout Europe, most recently in the German and Italian elections.

Neither the current center-left nor the center-right coalition, which appear to be in a deadlock, will have a majority in the Riksdag. Projections show that both will attain 143 places in the 349-seat legislative assembly, leaving them over 30 short of the overall majority. The balance is made up by the Sweden Democrats.

Both of the main parties reiterated after the results were announced that they will not form a coalition with Akesson’s faction, meaning that a minority government, grand coalition or prolonged political crisis are all on the table. The center-right leaders urged the government to resign, while prime minister Stefan Lofven said that he would carry on fulfilling his duties at least for the next fortnight, as negotiations begin.

The instability – even Lofven admitted that “nothing was decided” on Sunday – could mean months more of the bitterness that has marked the most intense campaign in the country’s history, and the first since the major immigrant influx during which Sweden proportionally accepted more refugees than any other country in Europe.

Once unpalatable to the mainstream, the Sweden Democrats have presented themselves as the only honest and effective alternative to the mainstream parties, promising to curb migration, enforce integration, and tackle rising violent and sexual crime.

In turn the center-left, which had a dismal approval rating in the 20s going into Sunday’s vote, despite steady economic growth, have mobilized all electoral resources to paint their opponents as an existential threat to Swedish society and political system as a whole.