Home » Manchet 1 » ‘Love story over’: Macron says EU can’t rely on US for security – is it time to start wooing Russia? 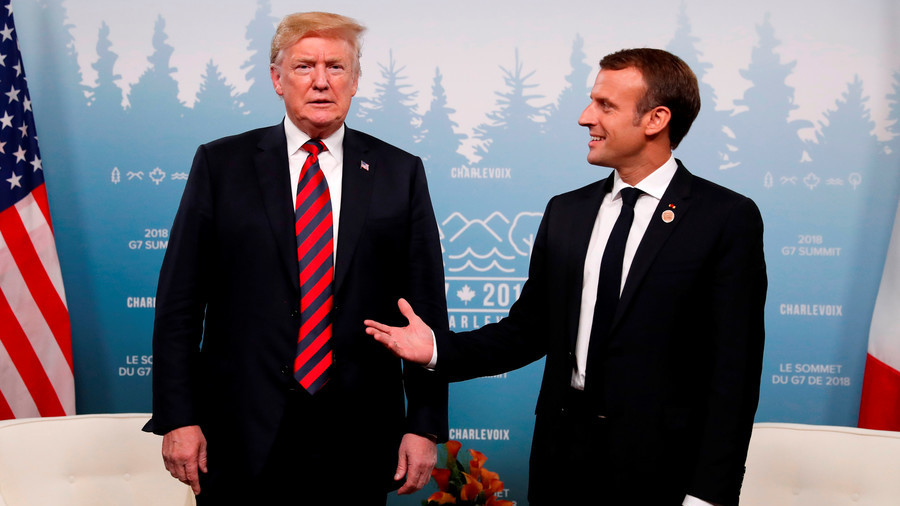 ‘Love story over’: Macron says EU can’t rely on US for security – is it time to start wooing Russia?

Emmanuel Macron’s remark that Europe can’t rely on the US for security, along with hints at rapprochement with Russia, show a rift in EU-Washington ties – a relationship that’s crumbling amid pressure to end sanction policies.

“Europe can no longer rely on the United States for its security,” the French President said in a recent foreign policy speech in Paris.

Relations between the US and France showed a promising start this year. “Handsy” interactions took place between Donald Trump and Macron during their summit in April, with the pair planting a tree together on the White House lawn. From those scenes, you would never guess that the allies would turn on each other only a month later.

The first fracture in relations occurred after Trump’s withdrawal from the landmark Iran nuclear deal. At that time, on the heels of Trump pulling out of the agreement, France’s economy minister urged Europe to stop acting like “US vassals” and continue trading with Tehran in defiance of what the “global economic policeman” had in store.

Trump’s import tariffs on steel and aluminium in June triggered a global backlash and retaliation from the EU. Macron called the measures “illegal” and warned that “economic nationalism leads to war,” adding that this is exactly “what happened in the 1930s.”

This “reformatting of transatlantic relations during the Trump presidency has gone very far,” Yury Rubinsky, head of the Center of French Studies of the Russian Academy of Sciences, told RT, adding that it was Washington that initiated such a shift.

Independent journalist Luc Rivet puts it another way. “The love story between Europe and the US has ended with fracas,”adding that the Trump administration “has simply put a crude light on an inevitable evolution.”

Ditching the Iran nuclear deal, quitting the Paris accord, and imposing steel and aluminium tariffs – the White House’s tough-guy rhetoric seems to be driving the EU further and further away from Washington. In fact, Trump set the stage for the rift between the US and the bloc during his presidential campaign, when he called the union a “hell-hole” and a “mess.”Later during his presidency, Trump noted that the US has “a lot of foes,” including the European Union.

That’s why in his speech about EU security, the French leader also stated that he wants to launch an exhaustive security review involving all of Europe’s partners, which also includes Russia. Days later, during a news conference on a visit to Helsinki, Macron insisted that it is in the EU’s interest “to have a strategic relationship with Turkey as well as with Russia that brings stability, that will in the long-term bring more strength and coherency.”

Russian Foreign Minister Sergey Lavrov believes that Macron’s position wasn’t formed in a single day. “The US course of action on the international arena makes everyone think,” he said.

No country with “a little respect for itself” can tolerate when its policies are being dictated, the Russian top diplomat noted.

Yury Rubinsky, head of the Center of French Studies of the Russian Academy of Sciences, insists that when Macron mentioned Russia, he was mostly referring to the crisis in Syria, and, in particular, to the reconstruction of the war-torn country after the conflict is over.“Where would all migrants return [after the war is over]? Who would pay for the country’s reconstruction?” he asked.

Macron, a 40-year-old ambitious centrist who is now “desperately looking for a major international role in the EU,” has failed in many of his ambitions, Rivet believes. Yet the former investment banker may “lead the path of reconciliation,” says the journalist. In addition, Austria and Hungary, as well as Eurosceptic parties such as Alternative for Germany (AfD) and France’s National Rally (formerly Front National), are calling for closer ties with Russia and urging for sanctions to be canceled.

Europe is starting to understand that sanctions against Russia won’t work, while its economy suffers. “European business and agriculture lobbies have been trying for a long time to persuade European politicians to dismantle the set of mutual sanctions that mainly hurt European agribusiness,” Rivet said.

Yet Rivet admitted that Europe can do little to confront Washington. “The EU will simply negotiate, at best, to protect its companies and products selling and trading in the US, from more American sanctions,” he said. Speaking on the Iranian nuclear deal, Rivet assumed that Europe is “completely naked” and “cannot do anything to save” the agreement.

“No European company would ever dare antagonize the American government about the sanctions on Iran. Europe would not really confront America on Iran. Europeans would surely lose the fight,” he said.

But there may be a possibility for Europe to take a closer look at its eastern neighbor, instead of the one across the Atlantic Ocean. “Europe is totally paralyzed when it comes to dealing with the US, except, why not, in re-opening the window of collaboration with Russia,” Rivet said.