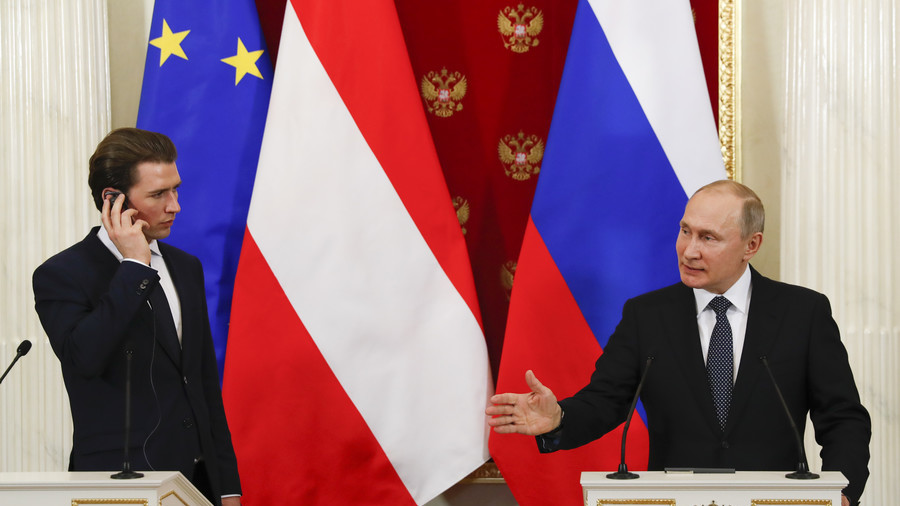 Moscow wants the EU to forget the claim that it’s trying to fracture European politics, Vladimir Putin told Austrian TV, ahead of his Vienna visit. Russia keeps a large chunk of reserves in euro and wants a prosperous EU, he said.

President Putin ridiculed the idea of Moscow allegedly supporting forces that strive to dismantle the EU, saying that “people in Austria and in the other European Union countries [should] put this idea out of their minds.”

“It is not our aim to divide anything or anybody in Europe,” the Russian leader said, speaking to Austria’s ORF broadcaster. “On the contrary, we want to see a united and prosperous European Union, because the European Union is our biggest trade and economic partner,” he added, explaining that instability within the bloc would harm its economic relations with Russia.

He stressed that Russia keeps as much as 40 percent of its gold and currency reserves in euro and is thus essentially interested in the stability of the single European currency. As for Russia’s cooperation with some political parties in Europe that are often described as Eurosceptic, Putin said that it is a purely pragmatic matter unrelated to any devious plans.

“We seek to cooperate with those who publicly declare that they are ready and willing to cooperate with us. This alone is the reason why our political parties, groups and movements have contacts at the political and party level with certain European ones,” he said.

Putin spoke to ORF ahead of his scheduled visit to Vienna on Tuesday, where he will hold a meeting with the Austrian Chancellor Sebastian Kurz, as well as Vice-Chancellor Heinz-Christian Strache. Strache leads Austria’s right-wing Freedom Party, which is often described as Eurosceptic and advocating better relations with Russia.

On Sunday, Strache called for the “normalization” of political and economic relations between Russia and the EU, as well as for the lifting of anti-Russia sanctions. His party also vowed to fight for this as part of the Austrian government.