Home » Manchet 1 » Putin talks past & future challenges, thanks incumbent cabinet ahead of inauguration 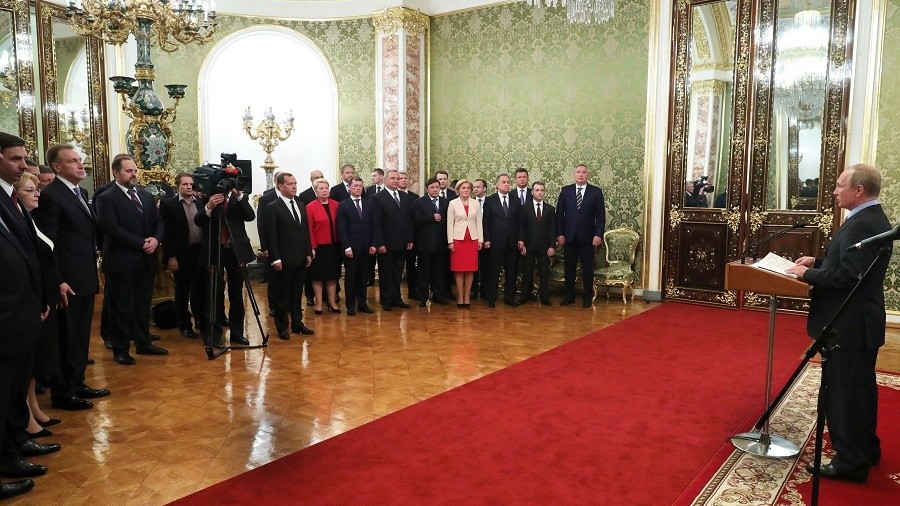 Putin talks past & future challenges, thanks incumbent cabinet ahead of inauguration

Vladimir Putin has thanked the government for their efforts in overcoming past challenges, and briefly outlined future ones, in a meeting with a cabinet that will resign on Monday, the day of the Russian President’s inauguration.

“It is important to maintain and develop such new approaches and, in general, to ensure the continuity in work, the continuity and consistency in the development of the country, including a clear working rhythm in the upcoming period during which the new government will be formed. I am counting on your support, your sense of responsibility and your professionalism,” the president said, according to a Kremlin press release.

The Russian government, headed by Prime Minister Dmitry Medvedev, will resign on the day of the inauguration (scheduled for Monday), although its members will temporarily retain their positions until a new cabinet has been formed.

The president stressed that over the last six years they, the longest-serving Russian government ever, have faced a number of “new challenges and extraordinary events in the country as well as in the world,” according to Kremlin spokesman Dmitry Peskov.

“The work of the government was mainly focused on implementation of the May decrees of 2012. Yes, there were difficulties, problems, not all achievements have been perfected to a T… But, I will repeat myself, there are tangible results, some dynamic changes. The strategic trajectory for development has been set right,” the president added. Putin’s so-called ‘May decrees’ of 2012 focused on economic and demographic policies, education, scientific research and healthcare, among other developmental aspects.

Putin was re-elected president in the March election and, after his Monday inauguration, will have two weeks to recommend to the State Duma a candidate for the position of prime minister, who will then be tasked with forming a new government. So far Putin has given no hints as to who might become the next PM, or any other potential new appointments.