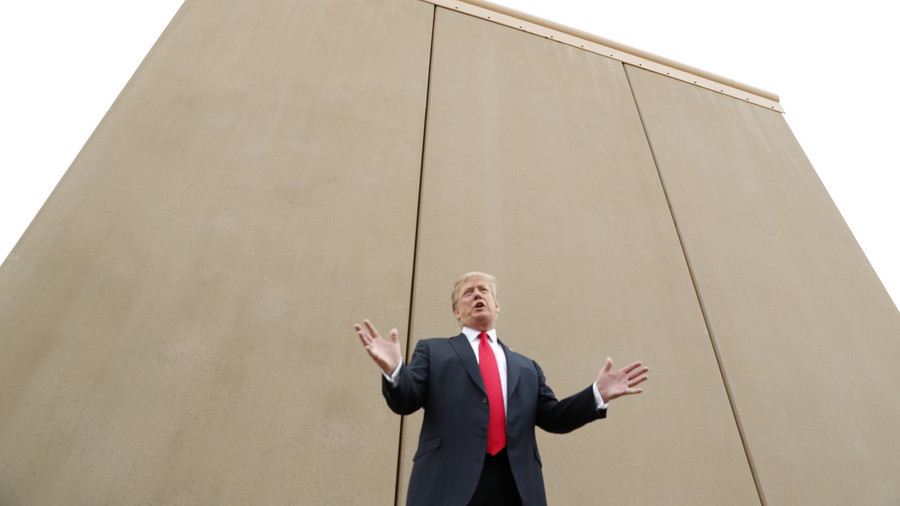 Donald Trump has long pushed for a wall to be built along the US-Mexico border, but he seems to be no longer insistent that Mexico pay for it. The US military should construct it because it’s now “rich,” he suggested on Twitter.

“Because of the $700 & $716 Billion Dollars gotten to rebuild our Military, many jobs are created and our Military is again rich. Building a great Border Wall, with drugs (poison) and enemy combatants pouring into our Country, is all about National Defense,” Trump tweeted on Sunday. He ended his tweet by saying “Build WALL through M,” apparently creating his own abbreviation for “military” due to Twitter’s 280-character limit.

It comes after Trump signed a $1.3 trillion spending plan on Friday, despite saying the White House was “very disappointed” in it – partly because it didn’t pay for his border wall in full. He said he had “no choice” but to sign it because the military needed to be funded.

Trump sought $25 billion from the US government to fund the wall, but the plan included significantly less – just $1.6 billion for building new sections of wall and replacing older sections.

However, Trump tweeted on Sunday that much can be done with the money, while stressing that the $1.6 billion was “just a down payment” and promising that “the rest of the money will come.”

Trump’s tweets seemingly represent a U-turn from his previous wall-based rhetoric, which included a promise to make Mexico pay for the wall. It’s a promise that he carried throughout his campaign and into his presidency, and one that energized voters so much that “Build that wall!” became a common slogan shouted at Trump’s campaign rallies.

However, Mexico couldn’t disagree more. In fact, a tense phone call about the wall between Trump and Mexico President Enrique Peña Nieto in February led to the Mexican leader’s visit to the White House being shelved, The Washington Post reported at the time. Peña Nieto also scrapped a planned visit to Washington in January 2017 over Trump’s insistence that Mexico pay for the wall’s construction.

Although neither leader has made an official presidential visit to the other, the two did meet at the G20 summit in Germany in July. They also met when Trump traveled to Mexico City as a candidate during the 2016 presidential campaign.