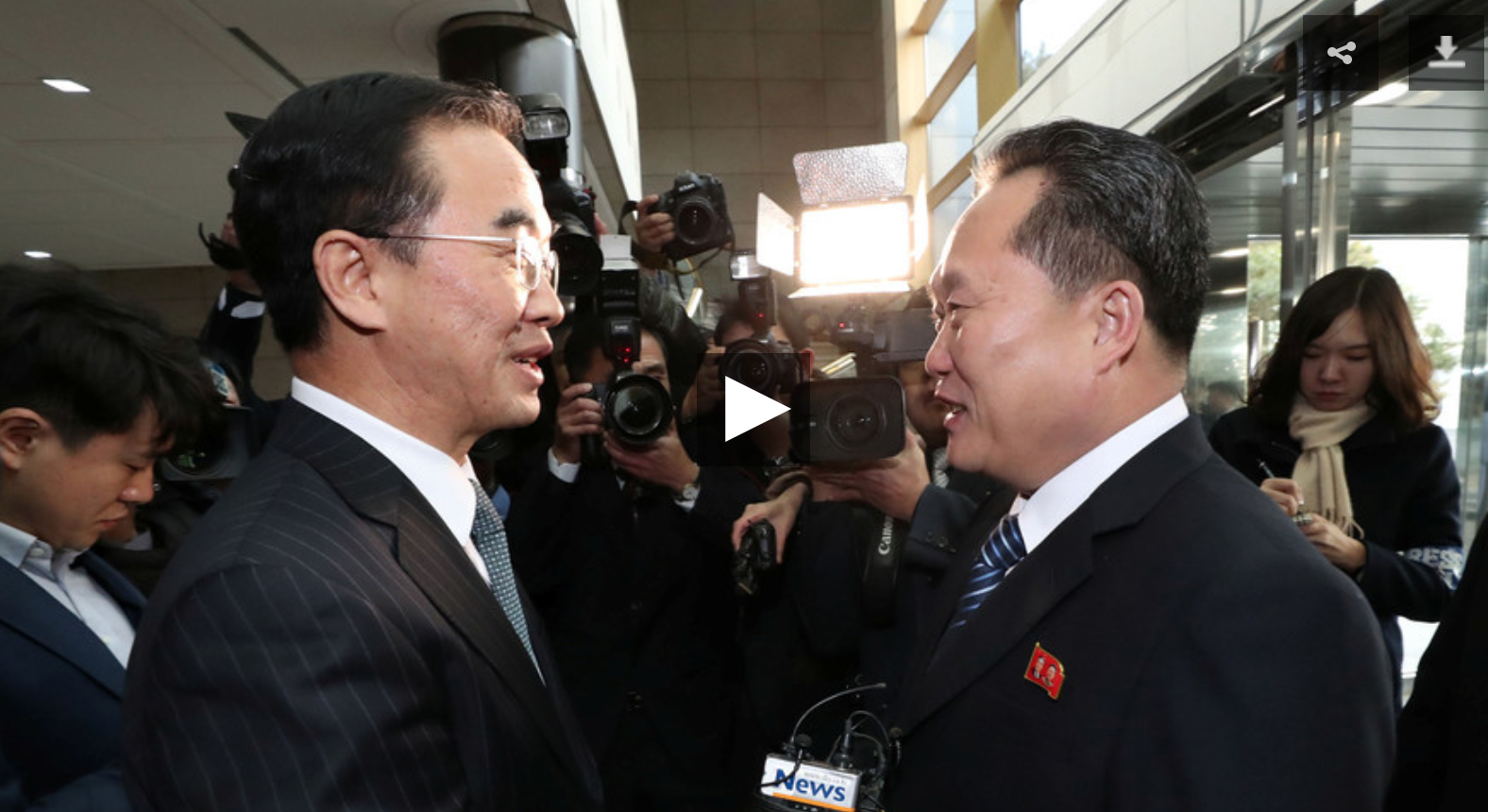 Optimism is high as the much anticipated intra-Korean talks, the first in two years, kicked off Tuesday, with the head of the N. Korean delegation hoping the “serious and sincere” negotiations will deliver “valuable” results.

“Today, North and South Korea will engage in talks in a serious and sincere stance,” Ri Son Gwon, the chairman of the Committee for the Peaceful Reunification of the Country, said. Ri, who leads the 5-member North Korean negotiation team, shook hands with his South Korean counterpart, Unification Minister Cho Myoung-gyon at the start of the talks, saying he hopes for “precious” results.

During the course of their discussions, Seoul proposed to revive military talks with Pyongyang, which would include engagement on the critical issue of denuclearization, Yonhap reported. South Korea also suggested convening a reunification meeting next month for families separated by the Korean war.

North Korea will send athletes and “high-ranking” officials as part of its delegation to PyeongChang 2018, according to South Korea’s Deputy Unification Minister Chun Hae-sung. Chun proposed that both countries’ delegation members march together at the opening ceremony of the Olympic Games. North Korea’s taekwondo demonstration teams, along with singers and dancers will also be part of the Games, according to Yonhap.

Ahead of the talks, Cho said he hopes the respective delegations would be able to turn the Olympics and Paralympics set for next month into “a peace festival” and that the meeting in the Korean Demilitarized Zone would serve as a “first step” towards a thaw in relations. Touching on the schedule, the South Korean delegation chief did not provide any details, but said the delegates “will not be in a hurry” and that the talks will proceed “in a calm manner.”

Seoul’s war games with Washington, on one hand, and Pyongyang’s missile and nuclear tests, on the other, have hampered contact between the two Koreas, and the Tuesday’s sit down comes after a rare call for rapprochement  by North Korean leader during his New Year address. Kim Jong-un proposed the countries reestablish dialogue aimed at easing military tensions that has escalated, particularly in the last year.

Seoul welcomed the initiative, proposing a concrete offer for talks which was subsequently agreed to by Pyongyang.

The decision to reactivate the diplomatic hotline, followed by the meeting, comes after Washington agreed to delay the joint military drills with Seoul after South Korean President Moon Jae-in appealed to Donald Trump to postpone the exercises until the end of the Olympics.

The US, meanwhile, cast doubt on Pyongyang’s motives and the overall purpose of the talks, with State Department spokeswoman Heather Nauert suggesting the North Korean leader is not to be trusted as he essentially may be trying “to drive a wedge” between the US and South Korea during the talks.

While Washington has no seat at the negotiation table, unlike previously, it did not stop the US leader from taking credit for enabling the talks, which he said were only possible because of his “tough stance” on North Korea.

Trump achievement in raising the chance of peace talks between the two Koreas, lies in him helping to accelerate the development of Pyongyang’s nuclear and missile program, Sourabh Gupta, an Asia-Pacific strategist argued, speaking to RT.

“Perversely, Donald Trump should take some credit in terms of North Korea accelerating its nuclear and ballistic missile deterrent so that it now feels it is reasonably assured that it has the deterrent and can now open talks,” Gupta said, adding, that from a diplomatic perspective the credit should be given to the South Korean president.

He noted that Kim’s New Year’s Speech, in which he spoke about reducing military tensions, participation in the Olympics and family reunions, was effectively a response to the speech delivered by the South Korean President in Berlin in June, when he outlined his vision for intra-Korean reconciliation through dialogue.

Gupta said he believes Pyongyang is “really and genuinely thinking to play the reconciliation card” pointing out to the “very respectful and conciliatory tone” of Kim’s address. However, it cannot be ruled out that North intends to use this pause for making technological advancements or indeed, try to sour American-South Korean relations, he noted.

As far as the outcome of the talks is concerned, Gupta thinks that although negotiating peace is a gradual process “there will be a breakthrough, definitely, with regards to the Olympic participation.”